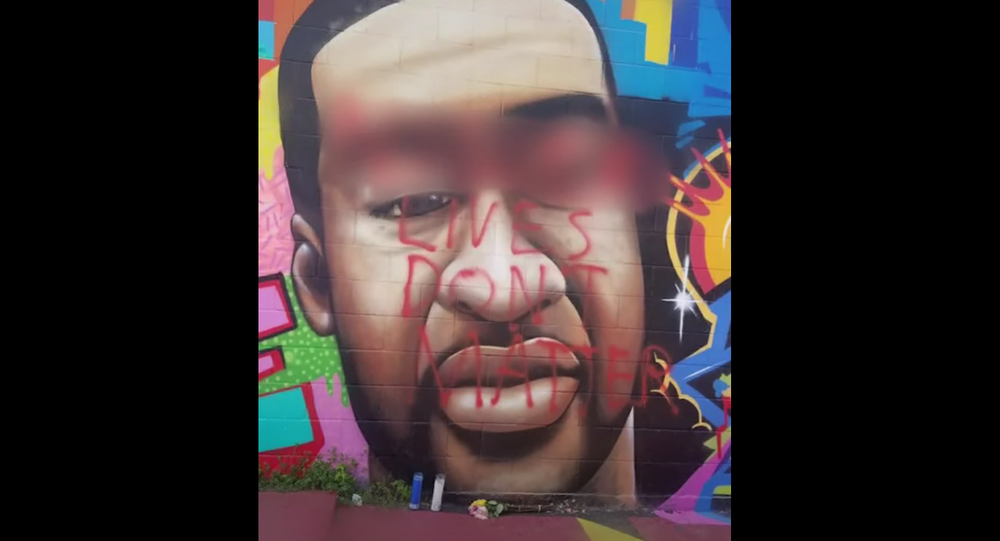 This week, a jury found ex-Minneapolis Police Officer Derek Chauvin guilty of all three charges related to the May 25, 2020, murder of 46-year-old George Floyd. Chauvin is set to be sentenced on June 16 and is facing up to 75 years behind bars for second-degree unintentional murder, third-degree murder and second-degree manslaughter.

A mural with Floyd's likeness was vandalized in downtown Houston, Texas, on Thursday, just two days after the guilty verdicts were read in the Chauvin trial, according to the Houston Police Department (HPD).

The words "NI**ERS LIVES DONT MATTER" were explicitly scrawled on the wall art, which is located a couple of miles from Houston's Third Ward, where Floyd grew up.

HPD Chief Troy Finner urged those in the city to focus on maintaining a community of trust, rather than the "act of one stupid individual."

"Let’s celebrate who we are. A great diverse sophisticated city and we’re going to show the nation how we stand up. That’s what we should be reflecting on right now," he said.

Chief @TroyFinner provides a statement on the vandalism of the #GeorgeFloyd mural. pic.twitter.com/3LujZ6R6LG

According to investigators, there are no known surveillance cameras in the immediate area.

While a suspect has not been arrested in connection with the HPD's probe, local artists have already managed to match the mural's colors and salvage the artwork.

UPDATE: While I was there at the defaced #GeorgeFloyd mural, the artists who painted it showed up to cover up the offensive message. They’re going to get the correct paint colors and come back to fix the mural. They’re hoping to have it finished by the end of the day. #abc13 pic.twitter.com/WDFaNi5z4T

UPDATE: the defaced #GeorgeFloyd mural has been fixed. HPD police chief says they are investigating and will charge the person responsible. #abc13 pic.twitter.com/b2YOk1vUaO

While many Americans believe the verdict is a step toward holding law enforcement officers accountable for acts of brutality, others have argued the jury may have felt pressured into guilty verdicts due to concerns of social unrest.

There have also been questions raised about US President Joe Biden's public plea for the "right verdict."

A Minnesota court announced on Friday that sentencing in Chauvin's case is presently scheduled to take place at 1:30 p.m. local time on June 16.

However, prosecutors in the case have called for usual sentencing guidelines to be abandoned due to a number of factors, including the fact that Chauvin was a uniformed officer and his crimes were witnessed by several children. A 9-year-old girl who testified in the case said watching the officers restrain Floyd on May 25 made her "sad and kind of mad."

Chauvin has 60 days to appeal the verdict.

'In Particular': White People Given Special Instructions at the Entrance to George Floyd Square