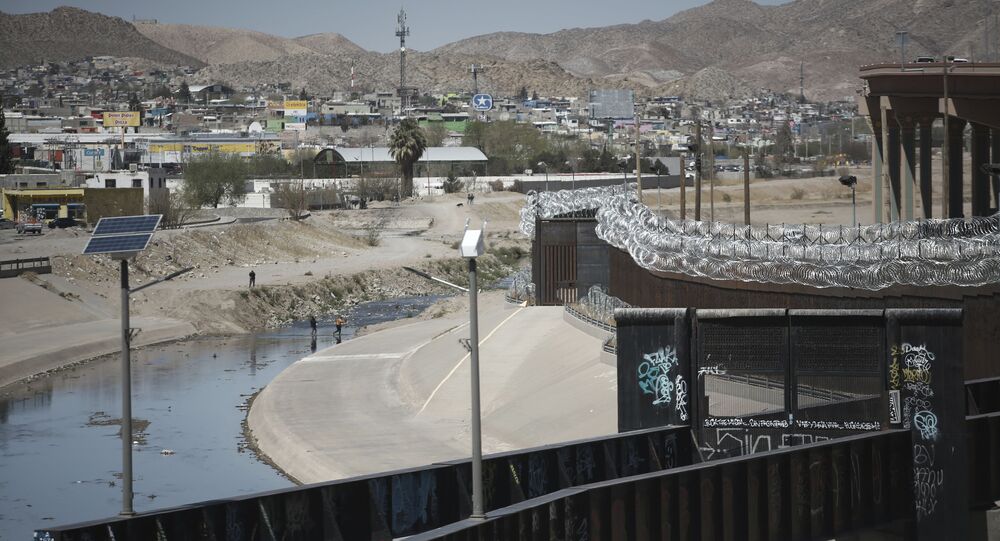 The US Border Patrol has been swamped by an unprecedented number of illegal immigrants approaching the southern US border following the introduction of a new immigration policy by recently elected US President Joe Biden.

According to multiple statements made in recent weeks by representatives of US border security agencies, a crisis at the US southern border has exhausted border security personnel and facilities under their supervision that are experiencing staff and space shortages as the country registers a record-breaking immigration influx.

Amid the extraordinary pressure, the Department of Homeland Security (DHS) has reportedly been mulling to raise the limit of migrants allowed to be released into the US as another option to the detention program.

Commenting on the alarming pressure and financial loses that border security agencies faces amid the immigration influx, a sheriff in Kinney County, Texas, Brad Coe, told Fox & Friends on Friday, that what is happening right now at the border is "unprecedented".

Coe remarked that the agency is recording property damage that has “never seen before” with fence damage in the amount of $100,000 in the past two weeks as “large groups of aliens are cutting fences on private property and walking through like they own the place.”

He said that he spoke “to a number of ranchers” advising them to continue recording “what it's costing to repair the fences” and other damage migrants causing to their property, the crops, the animals that they're losing, the money lost, trying to round up these animals and get them back.”

“So give me a bill. Tell me what it's costing you so I have some leverage or some status when I go to Austin and when I go to Washington to try to open up people's eyes on what's going on down here,” he said.

Amid the escalating pressure, the US government has been mulling an increase in the number of migrants, that could be let into the US, according to Fox News, citing an internal Department of Homeland Security communication. The DHS is reportedly set to develop corresponding plans of release with US Immigration and Customs Enforcement (ICE).

© AP Photo / Eric Gay, File
A group of immigrants from Honduras and El Salvador, who crossed the U.S.-Mexico border illegally, are stopped in Granjeno, Texas

Despite the reported development of such plans, a DHS spokesperson told Fox News that the Biden administration "has made it clear that the border is not open", noting that the US policy now is  "to expel single adults and families".

"In situations where individuals cannot be expelled, they are placed into removal proceedings and a custody determination is made, which could result in an Alternative to Detention program", a spokesperson for the DHS said.

Situation at the Southern US border

According to the recent data, encounters with illegal immigrants at the US Southern border over the last month skyrocketed by 72 percent, compared to February rates.

A migrant surge overwhelming US border security agencies prompted Washington to open new temporary facilities and allocate resources from other parts of the country. The Department of Homeland Security’s Customs and Border Protection unit confirmed earlier this month that 300 of its field agents had been reassigned to the southern border.

At least 15 percent of New York’s northern border staff was transferred to the Southern border, the New York Post reported, citing anonymous sources said to be from within the agency who claim that they have “never seen the manpower shortage along the Canadian border as low as it is now” and claiming that some parts of it not being patrolled at all. According to northern New York state GOP Rep. Elise Stefanik, remaining personnel are “forced” to work remotely with “illegal immigrants in Texas.”

Brandon Judd, president of the National Border Patrol Council labor union, noted in an interview with Fox News last Saturday that security agents had apprehended more than 1,600 migrants during the preceding 24 hours, adding that this is "really getting pretty much at a point they haven't even seen in their 20-year career".

© REUTERS / Jerry Glaser/CBP
Migrants sit inside a temporary processing facility for migrants, including unaccompanied minors, in Donna, Texas, U.S. February 25, 2021 in this handout photo provided by the U.S. Customs and Border Protection agency

According to Fox News, an unnamed DHS official said on Thursday that border security agents are “frustrated” and “burned out” with what they characterized as “irresponsible” open-border policies as “there’s not a lot of optimism that it’s going to get better anytime soon."

"The people that implemented them, because they are not down here and haven’t been here, they don’t have significant law enforcement background. This is all something that until you have done this job, or you've actually had some feedback from people who have, you're not well-equipped to handle the human capital involved in working this," he said.

The current administration refuses to refer to the problem at the border as “crisis,” and has not made any official visits or directly addressed the issue, reportedly pushing instead to "humanize" immigration policy, in particular by means of banning immigration enforcement agencies from using certain words considered by some to be offensive to immigrants, including “alien”, “illegal alien” and “assimilation,” and replace them with “noncitizen,” “undocumented noncitizen” and “integration”, correspondingly.

The border surge has occurred concurrently amid Biden’s deconstruction of the previous US president, Donald Trump’s, “zero tolerance” immigration policy. To date, the administration has suspended US-Mexico wall construction along with the Migrant Protection Protocols (MPP) and allowed unaccompanied migrant children to enter the country, prompting space and personnel shortages in temporary housing facilities.

The migration surge is also believed to be triggered in part by devastating storms that hit Central America last year, along with an ongoing economic crisis that was made worse by the coronavirus pandemic.