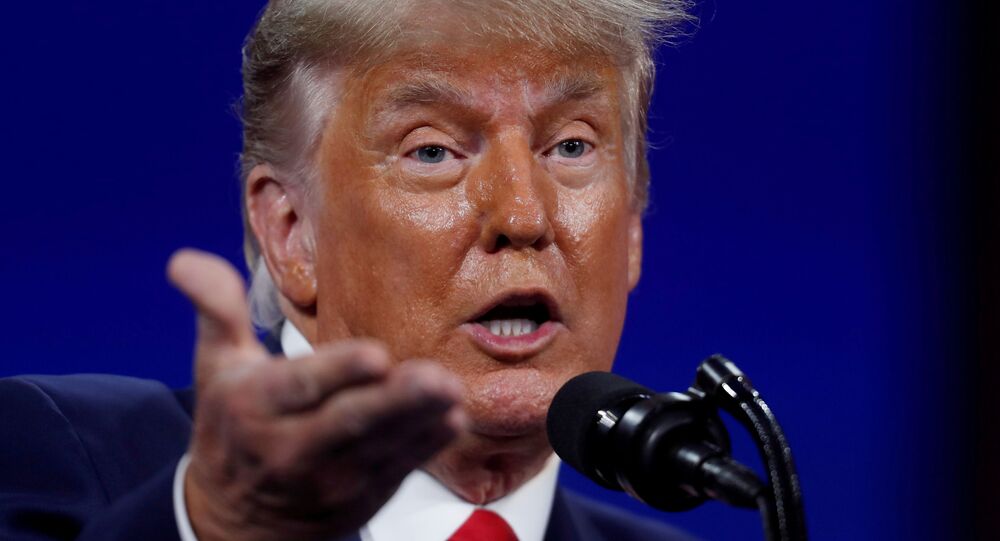 NBA star LeBron James earlier triggered outrage after posting a photo on Twitter of the officer who was identified as having shot a black 16-year-old girl, Ma'Khia Bryant, with the caption "YOU’RE NEXT" and the hashtag "#ACCOUNTABILITY". A backlash soon prompted him to delete the post, acknowledging that it was “being used to create more hate”.

Ex-President Donald Trump has weighed in on the scandal that erupted after a recent Twitter post by basketball celebrity LeBron James in connection with the fatal police shooting of 16 year-old Ma’Khia Bryant.

“LeBron James should focus on basketball rather than presiding over the destruction of the NBA, which has just recorded the lowest television RATINGS, by far, in the long and distinguished history of the League,” said the 46th POTUS in a statement released by his office on Thursday.

​On Wednesday, LeBron James posted a tweet about the fatal police shooting of Ma'Khia Bryant, an African-American girl in Columbus, Ohio.

The post showed a photo of white officer Nicholas Reardon, identified as having shot the 16-year-old on Tuesday afternoon.

James, 36, who is originally from Akron, Ohio, accompanied his tweet with the caption, "You’re Next” and the hashtag “Accountability," along with an hourglass emoji.

Trump calls for a peaceful protest he’s off Twitter. LeBron James calls for ‘your next’ cricket. pic.twitter.com/h4zUEzWz5L

“His RACIST rants are divisive, nasty, insulting, and demeaning. He may be a great basketball player, but he is doing nothing to bring our Country together!” reads the statement.

Earlier, Texas Republican Senator Ted Cruz also denounced LeBron James for his incendiary tweet, telling Fox News Primetime on Wednesday that sending such a message was "grossly irresponsible" of the basketball star, and could be interpreted by some as a call for violence.

The NBA star - a vocal supporter of Black Lives Matter(BLM), deleted the post soon after a significant backlash.

Lebron James is inciting violence against an Ohio police officer.

This is disgraceful and dangerous.

People like LeBron James and his friends on the left are driving good people away from careers in law enforcement.

This is the exact OPPOSITE of how to improve policing.

​James attempted to vent his feelings on the incident in another tweet, saying that his "anger still is here for what happened that lil girl".

ANGER does any of us any good and that includes myself! Gathering all the facts and educating does though! My anger still is here for what happened that lil girl. My sympathy for her family and may justice prevail! 🙏🏾✊🏾🤎👑

​In yet another tweet he said he was "so damn tired of seeing Black people killed by police", adding that he took down the post because according to him it was "being used to create more hate".

He also blamed "the entire system" for the situation saying that "they always use our words to create more racism".

I’m so damn tired of seeing Black people killed by police. I took the tweet down because its being used to create more hate -This isn’t about one officer. it’s about the entire system and they always use our words to create more racism. I am so desperate for more ACCOUNTABILITY

​There has not been any comment from either the NBA or the Los Angeles Lakers regarding the situation.

Nicholas Reardon was identified by authorities in Ohio on Wednesday as the officer who shot Bryant after responding to a 911 call, with a probe launched by state investigators.

Bodycam footage released by Columbus officials shows Bryant scuffling with two other girls, and lunging at one of them with what appears to be a knife in her hand.

​Reardon is then seen firing four rounds, with the teen falling to the ground. The 16-year old later died at a local hospital.

The scandal surrounding the Twitter post by LeBron James, who has often spoken out on racial justice issues, comes as he voiced elation over the verdict in the George Floyd murder case.

Former Minneapolis police officer Derek Chauvin was found guilty on all charges stemming from the in-custody May 2020 death of the African-American Minnesota resident.

​After a jury in Minneapolis on Tuesday convicted Chauvin of murder and manslaughter, the NBA player tweeted “Accountability”.

'Desperate For More ACCOUNTABILITY': LeBron Explains His 'YOU'R NEXT' Post About Ohio Shooting