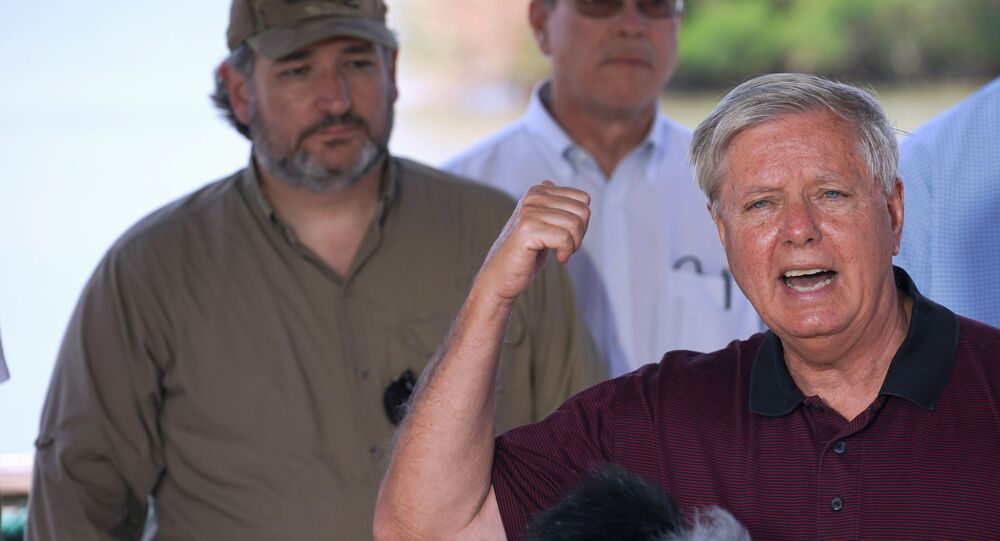 Earlier, Democrats introduced legislation to expand the Supreme Court to 13 judges, citing the need to restore public confidence in the body. The reform bill was criticised by GOP lawmakers who argued that it is aimed at bypassing the current conservative majority in the Supreme Court and turn the body into an institution controlled by one party.

Republican Senator Lindsey Graham, along with other GOP lawmakers on Thursday, protested the ongoing consideration of expanding the US Supreme Court, saying that if the same situation occurred in "a third-world emerging democracy" the US Department of State would characterized the move as a “puppet government creating a puppet court."

"If a third-world emerging democracy did this the State Department with all of us would be talking about a puppet government creating a puppet court," he stated.

"Packing the court and tearing down the institutions that protect our rights is fundamentally wrong," Cruz said, adding that what he describes as "court-packing" is a “rig the game” that would "destroy judicial independence."

Graham urged Democratic Senator Chuck Schumer “to think about the consequences”, and questioned whether California would be “broken into three states” and whether it would “be 20 Supreme Court justices” to allow Republicans to “get power back.”

Graham added that he intends to use whatever procedural possibility to stop "court-packing", adding that he would “stay in South Carolina to deny a quorum to do this crazy stuff” if necessary.

Packing the court is a power-grab.

HR1 is a power-grab.

The filibuster elimination is a power-grab.

So, the Joe Biden presidency is not problem solving thus far.

It's the biggest power-grab in my lifetime. pic.twitter.com/TrbAngCRnl

Blackburn asserted that Supreme Court reform would be a tool for Democrats to pass legislation they want and claimed that Americans “are not going to see their rights protected.”

"Can you even imagine what Joy Reid and her MSNBC friends would be saying if Republicans had tried to pack the court?" Blackburn stated, adding, "They would just lose it and it would be nonstop coverage."

Democrats want to pack the Supreme Court so they can radically change this country & our institutions. I won’t stand by and let this happen.

Can you imagine the reaction from Joy Reid and her MSNBC cronies if a Republican suggested such an absurd idea? @TedCruz @LindseyGrahamSC pic.twitter.com/okGR0dVelc

Apart from the senators, 20 Republican state attorneys general wrote a letter to US President Joe Biden and congressional leaders to show their concern about efforts to expand the Supreme Court, warning that the effort could “seriously undermine the constitutional system, the public’s confidence in our courts, and the rule of law.

The letter also stated that justices of the Supreme Court have “repeatedly shown their independence” regardless of who appointed them.

“When elected officials do not like the outcome in a case, that is not a sign of the politicization of the court, but of the system working. After all, the whims of elected officials are the very thing against which the court is there to protect the people," the letter reads.

Democrats called it a necessary step to regain public trust and return balance in the Supreme Court, claiming that the current court make up is unsustainable as well as being politicized, as three of the justices most recently appointed were put into place by a previous Republican president, Donald Trump.

While conservative judges currently constitute a 6-3 majority in the Supreme Court, Democrat intention to expand the number of liberal justices has stirred backlash from the GOP. Senate Minority Leader Mitch McConnell earlier warned that the move would be "turning the Supreme Court into just a political football."

The day before the initiative was introduced, Biden signed an executive order to summon a bipartisan commission that would examine the need for altering the Supreme Court.

Biden was suspected by Republicans during the election campaign of considering an expansion of the SCOTUS. Despite being questioned multiple times, he has not yet expressed an opinion on the matter, only once saying, while campaigning, that voters don't "deserve" to know his thoughts on the matter.