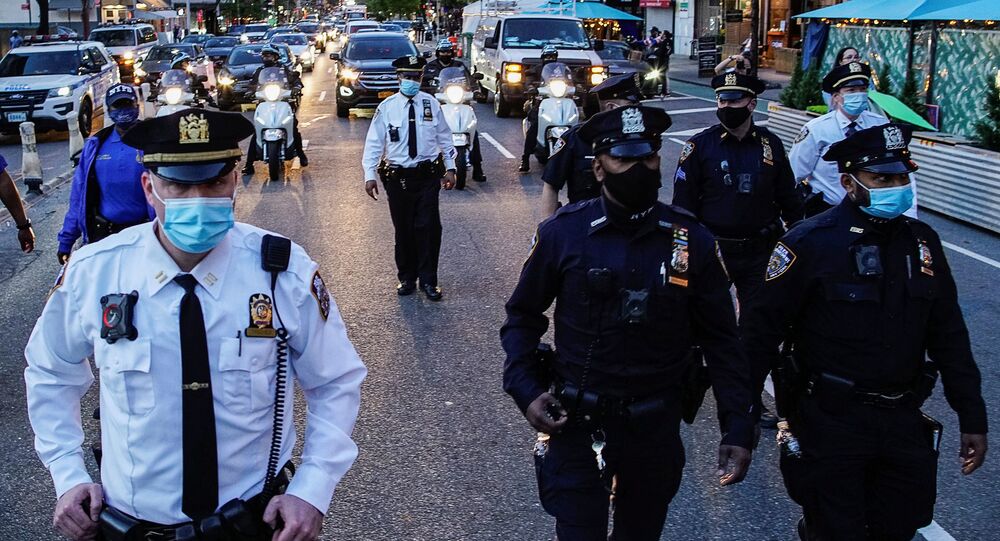 While some heaved a sigh of relief when Derek Chauvin was found guilty, legal observers are expressing concerns over the conduct of the US judicial branch in two cases related to the excessive use of force by the US police: the George Floyd case and that of Ashli Babbitt.

The jury's verdict prompted a heated debate with some legal observers referring to the unusual agitation surrounding the case. Minneapolis was engulfed by protests as jurors deliberated the verdict; President Joe Biden announced that he was "praying" for the "right verdict," which the press interpreted as "guilty." Earlier, Congresswoman Maxine Waters urged the Minneapolis demonstrators to become "more confrontational" if the ex-cop was let off the hook, while unidentified vandals smeared the former Santa Rosa home of Barry Brodd with blood – he testified as a defence witness in the trial.

Commenting on the fuss around the case, Harvard law professor Alan Dershowitz denounced the intimidation tactics as "borrowed precisely from the Ku Klux Klan of the 1930s and 1920s."

This is the possible legal path to a Chauvin reversal, says Alan Dershowitz: https://t.co/VlT7z8v2lm pic.twitter.com/NkGR6zmlLQ

​On Monday, Hennepin County Judge Peter Cahill, who is overseeing the Chauvin trial, criticised Waters' remarks, telling defence lawyer Eric Nelson that he could refer to them in an "appeal that may result in this whole trial being overturned."

"I wish elected officials would stop talking about this case especially in a manner that is disrespectful to the rule of law and to the judicial branch and our function," Cahill said.

These sentences would run in parallel with each other, not consecutively, which means that Chauvin's maximum sentence technically amounts to 40 years. However, having no prior criminal record he is likely to get 10.5 years in prison unless the judge applies aggravating factors. The prosecution has already asked for a tougher sentence than the Minnesota sentencing guidelines provide.

© REUTERS / POOL
Former Minneapolis police officer Derek Chauvin is led away in handcuffs after a jury found him guilty of all charges in his trial for second-degree murder, third-degree murder and second-degree manslaughter in the death of George Floyd in Minneapolis, Minnesota, U.S. April 20, 2021 in a still image from video.

In Minnesota Ashli Babbitt's Killer Could Have Been Charged

While the former Minneapolis police officer was charged and found guilty in killing Floyd, the cop involved in the fatal shooting of 35-year-old Ashli Babbitt was cleared of all criminal charges on 14 April. Babbitt, a 14-year Air Force veteran, participated in the Capitol building breach on 6 January 2021. She was shot dead while attempting to climb through a barricaded door near the House chamber. Babbitt was unarmed. The name of the Capitol police officer who killed her has not been released.

The DOJ’s press release highlighted that federal prosecutors could not prove beyond a reasonable doubt that "the officer acted wilfully to deprive Ms. Babbitt of a right protected by the Constitution or other law."

Here's a brief recap of the Ashli Babbitt case:

​"Specifically, the investigation revealed no evidence to establish that, at the time the officer fired a single shot at Ms. Babbitt, the officer did not reasonably believe that it was necessary to do so in self-defence or in defence of the Members of Congress and others evacuating the House Chamber," the DOJ's press release says.

Commenting on the federal officials' ruling, American lawyer and blogger known under nom de plume
"Techno Fog," argued that the DOJ had not done its best in examining the case.

First, the DOJ's press release neglected to consider whether the officer used "excessive force" in violation of 18 U.S.C. 242, which is easy to establish, according to the blogger. For comparison's sake, the concept of excessive force was the centrepiece of the Chauvin case.

Does that also apply to the police murder of Ashli Babbitt? https://t.co/dykg8HMnHg

​"Babbitt was unarmed, was climbing through a window and not attacking anyone. In response, she is shot and killed. Easily excessive," the layer wrote. In addition to this, judging from the evidence collected by the DOJ, there was no verbal warning to Babbitt or other efforts to subdue her before resorting to the use of deadly force on the part of the police officer.

Likewise, the blogger doubts that the federal officials were unable to prove "wilfulness" in the Capitol Police officer's actions. As the DOJ argued in other cases, the officer's prior training on the use of force could be viewed "as evidence that his conduct was wilful," Techno Fog noted.

"Are we to think that this officer didn’t have training on when force became excessive?" the lawyer asks rhetorically. "This case should have gone to the jury. If this killing took place in Minnesota or Chicago the results would have been different."

Justice and the Chauvin Verdict; US Strengthens Footprint in Africa