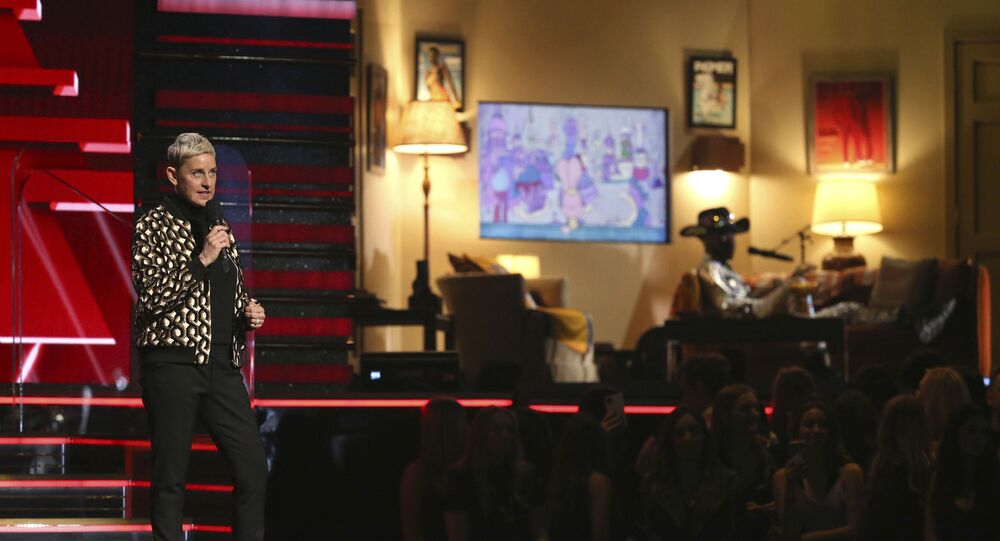 ‘What a Sellout’: Tweeps Gag Over Kimmel Failing to Confront DeGeneres on ‘Toxic Workplace’ Scandal

US comedian Ellen DeGeneres found herself under fire and her show the subject of controversy in the summer of 2020 when it was investigated for ostensibly being a ‘hostile’ workplace and over alleged harassment towards staff, with the actress eventually apologising and vowing "everyone would be treated with respect" on her namesake talk show.

Ellen DeGeneres’s appearance on Jimmy Kimmel Live on Tuesday left many among the audience a bit deflated after the host was particularly ‘soft’ on the American comedian.

Ellen DeGeneres & Jimmy Kimmel Play "Did We Do It?"

Jimmy Kimmel LiveEllen talks about her show "Ellen's Next Great Designer," her new documentary "Endangered" on Discovery+ and she plays a round of "Did We Do It?" with Jimmy.https://t.co/43Zn3R0zKQ

​The interview was the first major TV sit-down the television host had accepted since the scandal about her “toxic” workplace culture, yet the host failed to drum up a single question pertinent to the scandal.

DeGeneres, whose namesake daytime talk show has witnessed plummeting ratings in the wake of the scandal, has successfully dodged any interactions with interviewers potentially able to explode with a barrage of uncomfortable questions.

Nevertheless, amid the backlash against her “toxic” workplace culture row and eventual public apology, some might have expected Kimmel to attempt to insert a barb or two.

This did not happen. However, the two TV personalities were on a tear, joking about smoking “wacky-tobacky” and engaging in a quick round of “Who’s High?” with pedestrians on Hollywood Boulevard.

DeGeneres offered up a humorous story about how she drank multiple "weed-infused" beverages - a “gift from Chelsea Handler” - right before she drove her wife Portia de Rossi to the hospital for an appendectomy.

“It’s probably not safe, I shouldn’t be saying any of that,” admitted DeGeneres.

In the second half of the interview Kimmel also gave the comedian a chance to tout the premiere of her new HBO Max furniture show, Ellen’s Next Great Designer. Many see the show as an attempted ‘image rehab’. DeGeneres also enthused over her charity work to help endangered species.

Afterwards, the two hosts stirred up some laughs by raking up various strange things they had done on their talk shows over the years.

During the game, DeGeneres read from her card:

“Yeah, I did do that… I did that to George Clooney and Hugh Laurie,” responded Kimmel.

While a late-night comedy show is hardly the arena to address serious allegations, which in DeGeneres’s case included sexual misconduct by her top producers, the woman who has been accused of being “one of the meanest people alive” managed to sidestep anything on the show that might have been “awkward”.

The interview left some wondering if Ellen DeGeneres had only agreed to join Jimmy Kimmel for the sit-down under the condition that her scandal would be kept under wraps.

Many netizens weighed in on the interview and wondered if DeGeneres had ‘warned’ the host to avoid certain issues.

That's what happens when you take a pay day instead of following through with integrity oh well what do you expect from hollywood.

I must have missed the part where Kimmel went from late night talk show host to hard-hitting newsman.

They protect their own

Two clowns walk into a bar.

After rumours had been rife for years about comedian Ellen DeGeneres being “difficult” and many employees of her show feeling “unhappy”, in March, comedian Kevin T. Porter started a Twitter thread asking people to share “the most insane stories you’ve heard about Ellen [DeGeneres] being mean”.

Right now we all need a little kindness. You know, like Ellen Degeneres always talks about! 😊❤️

She’s also notoriously one of the meanest people alive

People responded by quoting diverse accounts of their interactions with the celebrity.

Working for her, I was instructed that I can’t look her in the eye and never ever say hi to her first. “But don’t worry, she definitely won’t be saying hi to you in the first place.” She creates the most toxic environment for her staff.

She performed a show at my school, giving an uplifting message to students. She rudely refused to talk to my friend who was assigned to interview her for a class.The comic who performed the next evening happily talked to my friend & that person is a bigger star than Ellen today.

DeGeneres, who built her worldwide brand on the motto “be kind”, buoyed by lavish acts of charity, was alleged to have a toxic workplace culture on her daytime show in 2020.

Current and former staffers claimed they faced racism, fear, and intimidation, according to BuzzFeed News.

“That ‘be kind’ bullshit only happens when the cameras are on. It’s all for show,” a former employee was cited as saying.

Claims about the reportedly toxic workplace culture at "The Ellen DeGeneres Show" led to an internal investigation by WarnerMedia, Variety reported last summer.

None of the allegations were actually directed at DeGeneres herself.

© AP Photo / John Shearer
Ellen DeGeneres, left, and Matthew McConaughey are seen in the audience during the Oscars at the Dolby Theatre on Sunday, March 2, 2014, in Los Angeles

A day after the internal investigation made the headlines, the talk show host sent an apologetic memo to her staff, according to People magazine, where she asserted she was glad the issues had been brought to light and that she hopes to "learn and grow".

DeGeneres issued a follow-up apology as she released a five-minute clip the day she launched a new season of her show to address the scandal.

"I learned that things happened here that never should have happened", she said, adding she wanted "to say she is sorry to the people who were affected".