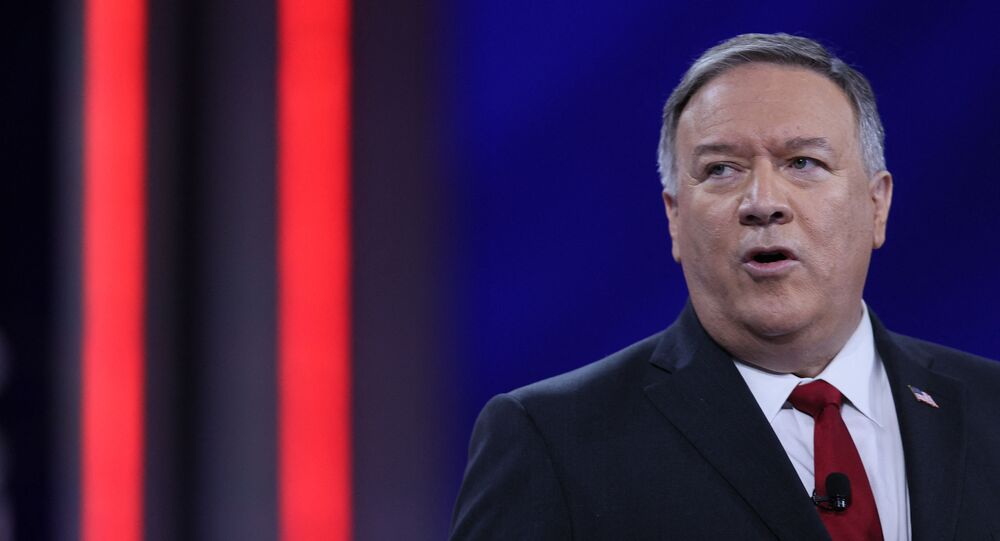 Amid ongoing Vienna talks to reactivate the Joint Comprehensive Plan of Action (JCPOA), the Biden administration has been sending indications to Tehran that it may consider reducing punitive sanctions currently targeting Iran, the Wall Street Journal reported on Wednesday.

"America, our ally, Israel and the world are safer because President Trump’s Maximum Pressure policy and crushing sanctions denied the Iranians the resources they needed to support building a nuclear weapon or to support terrorism around the globe," Pompeo, who led a push for sanctions during the Donald Trump administration, said in a statement cited by Fox News.

Coming against the backdrop of ongoing Vienna talks between senior diplomats from the US, Iran, Germany, France, Russia, China and the European Union in a bid to chart a manner in which the 2015 Joint Comprehensive Plan of Action (JCPOA) can be fully restored, the bill seeks to forestall a US reentry into the 2015 Iran nuclear deal.

Amid signs of tentative progress in indirect talks between the US and Iran in Vienna, the proposed legislation would incorporate measures that would require any new deal with Tehran to be ratified by the Senate, while codifying into law sanctions introduced on Iran during the Trump-era.

Furthermore, the bill would expand sanctions, extending them to the Iran's ballistic missile programme, the Iranian Islamic Revolutionary Guard Corps and Iranian-backed militias elsewhere in the Middle East and a range of Iranian industries.

“This bill will do three things. It shows that Congress is not bound to agreements by the president that purports to speak on our behalf. Secondly it codifies the Trump administration’s maximum-pressure strategy until Iran meets the 12 demands laid out by former Secretary of State Mike Pompeo in May of 2018. And thirdly, it expands the existing, bipartisan Iran sanctions mandated by Congress, making it the toughest sanctions bill ever introduced in Congress on Iran,” said RSC chairman Jim Banks at a press conference on 21 April.

Pompeo, who served in the House from 2011 until joining the Trump administration in 2017, weighed in on the proposed legislation, saying that he had been “working on this issue with respect to Iran for an awfully long time”.

America is safer when the Ayatollah doesn’t have the money to fund its nuclear program and proxy terror. And they said we couldn’t do it... pic.twitter.com/0dajwHRqpD

Underscoring that despite the Trump administration’s sanctions Tehran has continued to expand its nuclear programme, Pompeo stated:

“A pressure campaign — an effective one like we delivered — will continue to make the Iranians make difficult choices. Hard choices about whether to underwrite Hezbollah, underwrite the militias in Iraq… underwrite the Houthis… I’m proud of this legislation. It talks about the things that need to be done for Iran to rejoin the community of nations.”

Throughout his run for the White House in 2020 Democrat Joe Biden had campaigned on a promise to revive the Iran nuclear deal and reverse Trump’s maximum pressure strategy, which saw the US unilaterally scrap the 2015 Iran deal in 2018.

As Trump unleashed a plethora of sanctions on Tehran, in response, Tehran took several steps against denuclearisation, arguing that since the US had abandoned the deal first.

© REUTERS / LEONHARD FOEGER
An Iranian opposition group protests outside a hotel, during a meeting of the JCPOA Joint Commission, in Vienna, Austria, April 9, 2021.

Once entering office, Joe Biden and his administration indicated they were open to rejoin the deal, rescinding the Trump-era push to snapback UN sanctions that expired as part of the 2015 accord. This included an arms embargo that terminated in 2020.

Mike Pompeo had led the push for snapback sanctions, as the US claimed that despite leaving the deal, it retained rights as a participant of an accompanying UN Security Council resolution, allowing participants to trigger the “snapback” process if they decided Iran was breaching the conditions of the agreement.

This comes as earlier in April diplomats from Iran and the P4+1 (China, Russia, France, and the UK plus Germany) met in Vienna to discuss ways to get Iran and US back into the 2015 Joint Comprehensive Plan of Action (JCPOA).

.@HassanRouhani : The Islamic Republic of #Iran clearly and unequivocally declares that it will resume full implementation of its commitments once the P5+1 fully comply with their obligations.#JCPOA pic.twitter.com/uRzanwN5N5

Iranian President Hassan Rouhani declared on Tuesday that the US and Iran could reach an agreement to return to the 2015 nuclear deal soon if American negotiators proceed with “honesty” throughout the talks.

Rouhani added that at a meeting with activists in Tehran that the Vienna negotiations had “progressed about 60, 70%,” yet the Middle Eastern nation was in “no hurry” to revive the deal.

Meanwhile, the Biden administration had reportedly been sending indications to Tehran that it may consider reducing oil and financial sanctions currently targeting Iran in the context of the negotiations, according to the Wall Street Journal.

The newspaper cited sources participating in the discussions as claiming that US negotiators had put detailed proposals for reducing sanctions or removing them altogether on the table.