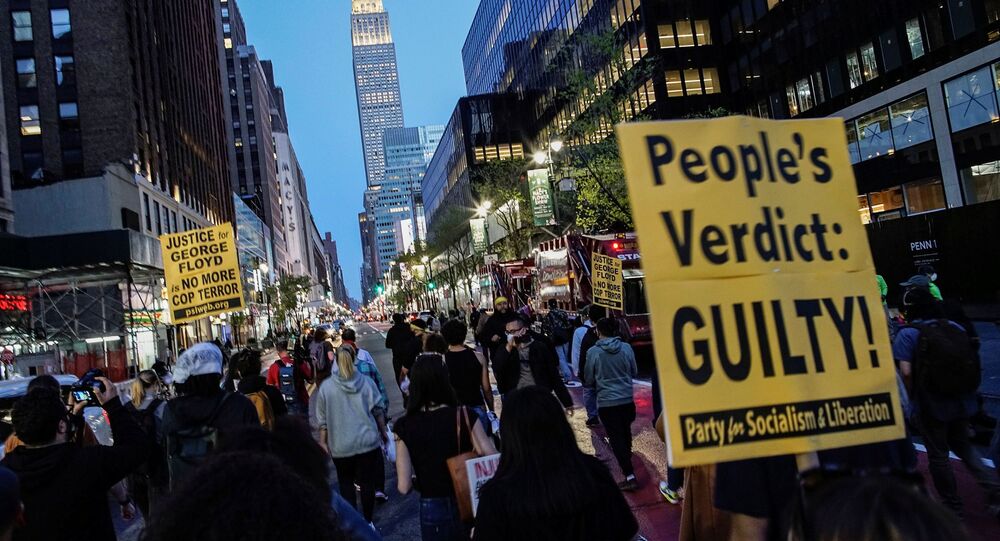 In Brooklyn, a crowd of several hundred people moved along the roadway from the Barclay Center arena. The demonstrators, with flags and banners, are moving along the roadway. The police do not interfere, accompanying the protesters.

"Whose streets? Our streets!” the crowd is chanting.

While trying to arrest Floyd who was accused of using a fake $20 bill at a local convenience store, Chauvin, now 45, kneed on the neck of the African American man three times for almost a total of ten minutes. After complaining "I can’t breathe" when Chauvin’s knee was on his neck, Floyd became unconscious during the arrest and died later at a hospital.

Floyd’s death triggered mass protests in a large number of major cities in the United States, where demonstrators denounced police brutality and demanded justice for African Americans who suffered at the hands of US police officers.

The judge after reading Tuesday's verdicts said Chauvin will be sentenced in eight weeks and will remain in custody. The judge also said Chauvin's bail has been revoked. Chauvin faces a maximum of 75 years in prison.

Footage from outside the courthouse showed members of the Minneapolis community celebrating the verdict and chanting Floyd's name.