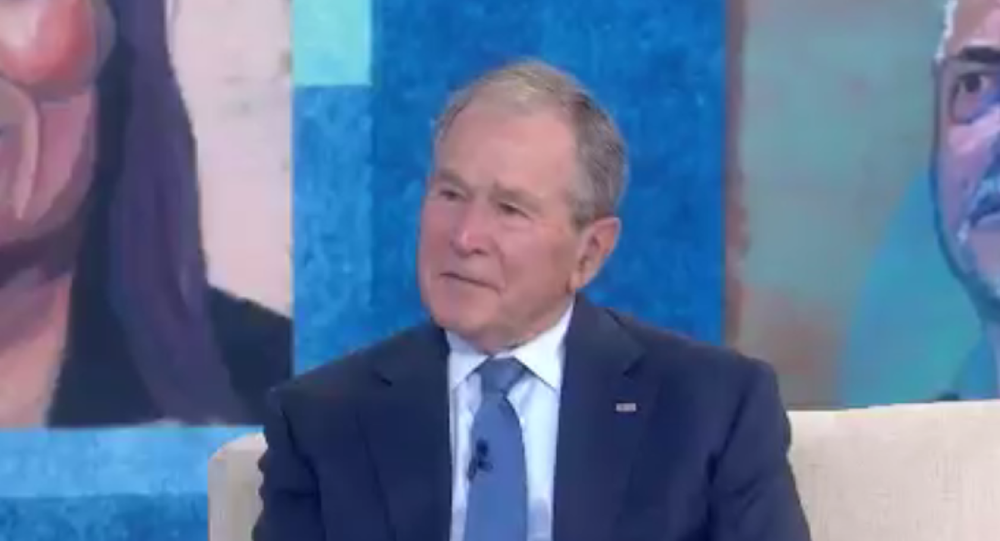 While former US President Barack Obama was known as the “deporter-in-chief,” immigration deportations under his successor, Donald Trump, were in fact less than those by Obama’s predecessor, George W. Bush, who created the Immigration and Customs Enforcement agency.

Talking to NBC’s Today Show co-host Hoda Kotb in an interview on Tuesday, Bush described the Republican Party as “isolationist, protectionist, and to a certain extent, nativist," saying it’s “not exactly my vision.”

In the context of American politics, nativism refers to a xenophobic nationalist movement that first arose in the 1830s amid fears that Catholic German and Irish immigrants would corrupt the morals and institutions of a country settled and founded largely by English and Scottish Protestants. In the 21st century, nativism is associated with Trump’s “America First” politics, especially its hostility to immigration.

How would you describe the Republican Party today? -@hodakotb

I would describe it as isolationist, protectionist, and to a certain extent, nativist. -Former President George W. Bush pic.twitter.com/tyFl2LnRMP

​Bush said that like many former US presidents, he had generally tried to refrain from intervening in the politics of his successors. One exception was in the aftermath of the January 6, 2021, insurrection by followers of Trump, when Bush issued a statement calling it “sickening” and said it could cause “grave damage” to the country.

He expanded on those thoughts Tuesday, telling Hoda again that it “kind of made me sick,” but noting he “was optimistic that we would survive that because I believe so strongly in the institutional stability of our country. And it did survive."

However, he said the Trump-centered nativist streak in the GOP hasn’t necessarily triumphed, telling NBC Tuesday that a candidate “has a shot” if they show a willingness to adapt on issues such as gun control, immigration, and education. He also said he favored “border enforcement with a compassionate touch” without explaining further.

"I think pro-immigration isn't the right way to put it," Bush said. "I think border enforcement with a compassionate touch. That's how I would put it. That's what immigration basically means, let's open up the borders."

Under Bush, who was president from 2001 to 2009, many of the seeds of the present immigration crackdown were planted, including creation of Immigration and Customs Enforcement (ICE) in 2003 as part of the new Department of Homeland Security, casting immigration as a national security issue. Muslims and South Asian immigrants also received greatly heightened scrutiny under Bush, including profiling by both the FBI and the Transportation Security Administration.

According to DHS statistics viewed by the New Republic, between 2001 and 2008, the US conducted 8.3 million informal “returns” of immigrants, forcing them back across the border, and carried out another 2 million formal deportation. By contrast, in Trump’s single presidential term, he deported just over 1 million immigrants, although under his tenure entry was made much more restrictive - including the total closure of the US-Mexico border at one point - and the treatment of migrants was much harsher.

Bush’s comments come amid the attempted creation of an “America First Caucus” by Trump follower Rep. Marjorie Taylor Greene (R-GA), which she said would push to protect "uniquely Anglo-Saxon political traditions.” However, the effort was quickly quashed by House Minority Leader Kevin McCarthy (R-CA), who last week spoke out against “nativist dog whistles.”

They also come after John Boehner, a former Republican representative from Ohio who led the GOP in the House as Majority Leader from 2006 until 2011, and later as Speaker of the House until his resignation in 2015, criticized the party as worse than when he was in Congress, when it was already known as “Crazytown.” He wrote in a recently published memoir that voters should only send delegates to Washington to “represent you who actually want to get things done instead of hucksters making pie-in-the-sky promises or legislative terrorists just looking to go to Washington and blow everything up.”

However, Bush didn’t restrict his criticisms to Trump: he also talked about US President Joe Biden announcing the war in Afghanistan would be over by September 11, 2021. Bush launched the war in October 2001 in the aftermath of the terrorist attacks on the World Trade Center and the Pentagon, which were carried out by the terrorist group al-Qaeda from its headquarters in Afghanistan, where it was tolerated by the Islamist Taliban government. While the Taliban was quickly forced from power, it has remained a powerful fighting force in the Afghan countryside, forcing the United States to negotiate a peace deal after 19 years of fighting and bearing the condition that all US and allied forces leave Afghanistan.

"My first reaction was wow, these girls (in Afghanistan) are gonna have real trouble with the Taliban," Bush told NBC. "A lot of gains have been made, and so I'm deeply concerned about the plight of women and girls in that country. I think we'll see, time will tell.”

"I think the administration hopes that the girls are gonna be OK through diplomacy. We'll find out. All I know is the Taliban when they had the run of the place, they were brutal."