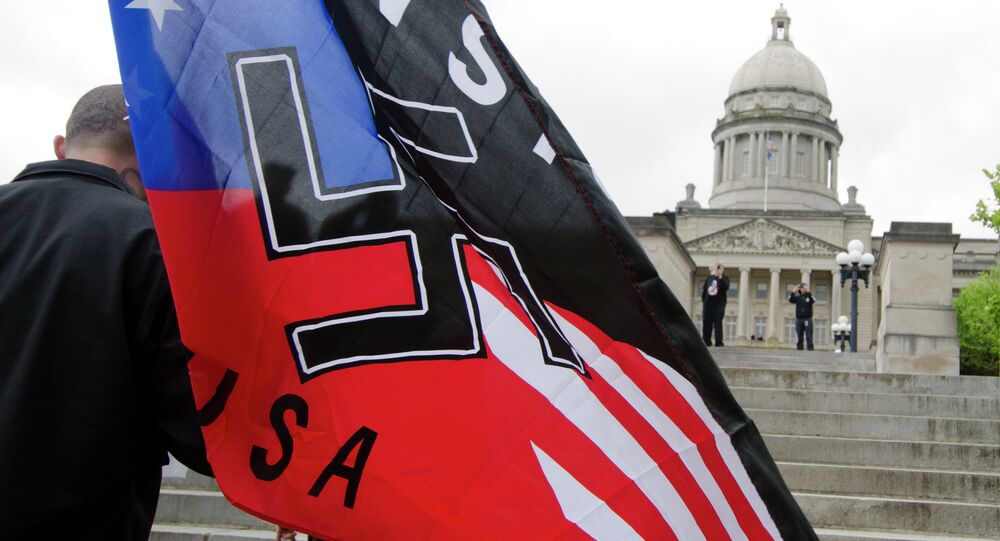 Earlier this month, the Arizona Department of Administration rejected an event permit application submitted by the National Socialist Movement (NSM), citing inadequate insurance. Nevertheless, members of the US-based Nationalist Front group assembled at a different location on Saturday, where they were seen clashing with counter-protesters.

Burt Colucci, leader of the NSM - one of the largest Neo-Nazi groups in the US, was arrested in Chandler, Arizona, on Monday and booked on a charge of aggravated assault, according to court documents made public on Tuesday.

A probable cause statement issued by Chandler Police Department officers detailed that, on the morning of April 19, Colucci and another man, both white, allegedly got into a verbal dispute with a group of Black men after seeing them litter.

Colucci claimed that he drew his handgun "to a low ready position" after the other men mentioned having firearms. However, the NSM leader said he "never pointed the firearm at anybody."

Prior to leaving the scene, the group of Black men allegedly began throwing trash at Colucci and his car. In response, Colucci "deployed pepper spray into the vehicle" belonging to the other men.

Both parties are said to have hurled racial insults at the other group.

According to an alleged victim and an independent third-party witness, Colucci did point his handgun at the victim. The NSM leader was ultimately arrested on Monday "based off the victim and the third party witness statements."

1) BREAKING: Neo-Nazi leader Burt Colucci of the National Socialist Movement was arrested on Monday in Arizona, just two days after leading a hate rally in Phoenix.

CW: Nazi violence and suicide are mentioned in this thread along with an incident involving anti-Black racism. pic.twitter.com/bwYf7qT1aF

A second, similar incident allegedly occurred, but Colucci was not charged for his alleged role in it because "there was no handgun seen during the second incident," the statement read.

Colucci, who lives in Florida, was in the area for a demonstration that was ultimately canceled due to inadequate insurance coverage that likely related to counter-protests.

After failing to secure a permit, members of the NSM decided to assemble at Eastlake Park in Phoenix, Arizona. The city website describes Eastlake Park (originally named 'Phoenix Park') as "the focal point of African American history in Phoenix."

A separate social media video shows members of the group marching through the park with various flags and a shield emblazoned with the NSM coat of arms. One man, presumed to be Colucci, is seen flashing his middle fingers to onlookers.

Nazis planned a rally at the capitol in Phoenix today, but unable to get a permit, opted to meet at a park across town, where they marched about while yelling slurs.

Counter protestors didn't get the venue change memo, but local folks were on hand to opine on Nazi's behavior. pic.twitter.com/C28fM6up0y

Colucci became commander of the NSM after Jeff Schoep, the group's former longtime leader, disavowed the movement and began speaking about the group.

The new leader has spoken out against Schoep, claiming the ex-commander of the NSM is switching sides to reduce legal liabilities related to the notorious "Unite the Right" rally in Charlottesville, Virginia, in 2017.

"I don’t understand it. Why people [sic] go from one extreme to another?" Colucci rhetorically asked The Detroit News in 2020. "I don’t see why people trust them."

US Jury Reaches Verdict in George Floyd Murder Trial, To Be Announced in About One Hour