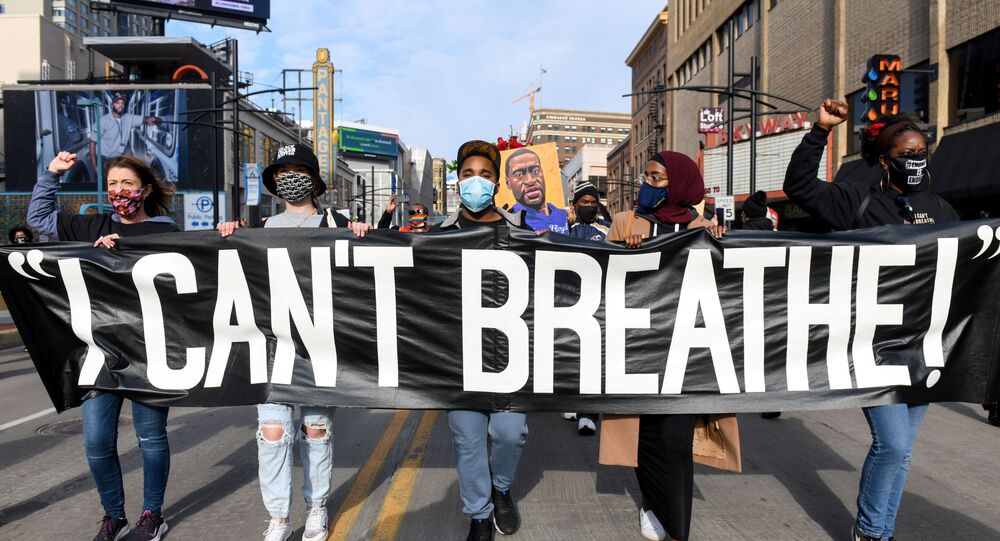 As World Awaits Verdict in George Floyd Trial, What Other Cases Have Had the Globe Enthralled?

The 12 jurors considering the fate of former police officer Derek Chauvin are sequestered in a Minneapolis hotel room considering testimony from 45 witnesses. The George Floyd trial is the latest trial to have caught the world’s attention.

Law enforcement across the United States is on alert for a violent reaction if former police officer Derek Chauvin is acquitted of murdering George Floyd.

​Chauvin, 44, was caught on camera kneeling for nine minutes on the neck of Floyd, a 46-year-old African-American man who was handcuffed and placed on the ground after allegedly buying cigarettes with a fake US$20 bill.

Jurors must reach a unanimous verdict on each charge to find him guilty or not guilty and if any one of them disagrees with the majority a mistrial would be declared and a new jury would hear the case all over again.

The outcome of the trial is being watched all over the world. Sputnik takes a look at some other cases which held the world enraptured.

In the late Victorian era Oscar Wilde was one of the most popular playwrights in London.

His plays, Salome and The Importance of Being Earnest, played to packed crowds in London’s West End and he also earned wild reviews for his novel The Picture of Dorian Gray.

On this day in 1895, Oscar Wilde loses a libel case against Marquess of Queensberry, who accused him of homosexual practices. Homosexuality was classified as a crime in England at the time.

​But in 1891, at the height of his fame, Wilde, 38, began a homosexual affair with Lord Alfred Douglas, a young poet and aristocrat.

The affair outraged Douglas’s father, the Marquess of Queensberry, who set out to ruin Wilde’s reputation by making the world know about his sexual peccadilloes.

Homosexuality was illegal at the time but Wilde stupidly sued for libel.

Queensberry’s barrister, Sir Edward Carson, announced he proposed to call to the witness box a procession of young men with whom Wilde had been sexually associated.

Wilde not only dropped the libel action but tried to flee the country but was captured and put on trial for gross indecency.

On the fourth day of the trial Wilde took the stand.

Wilde spoke up in defensive of homosexuality, saying: "It is in this century misunderstood, so much misunderstood that it may be described as the 'Love that dare not speak its name,' and on account of it I am placed where I am now. It is beautiful, it is fine, it is the noblest form of affection. There is nothing unnatural about it…The world mocks it and sometimes puts one in the pillory for it."

The jury in his first trial were unable to reach a verdict but he was convicted at a retrial and jailed for two years, during which he wrote the Ballad of Reading Gaol.

In 1894 Alfred Dreyfus, a Jewish officer in the French Army had been jailed for life and sent to the penal colony of Devil’s Island off the coast of Guiana after being convicted of spying for Germany.

After his conviction Dreyfus had the insignia torn from his uniform and was paraded before a baying Paris crowd, which shouted: “Death to Judas, death to the Jew.”

THE DREYFUS AFFAIR (1899) was made while the second trial was still underway. Georges Méliès released a multi-part series dramatizing the scandalous railroading of Captain Alfred Dreyfus.https://t.co/N8Bh0HAI3X pic.twitter.com/wAM8lSt3Ii

In it he highlighted the serious judicial errors and lack of evidence against Dreyfus and went on to accuse the establishment of anti-Semitism. Zola’s open letter led to him being convicted of libel and having to go into temporary exile in England.

In 1899 the eyes of the world were on France again when Dreyfus was granted a new trial. But again he was found guilty by a court martial.

It was only in 1906 that Dreyfus was officially pardoned and reinstated in the army.

Dreyfus retired from the army due to ill health in 1907 but was called back when the First World War broke out and served with distinction, being awarded the Légion d'honneur for his part in the battle of Verdun.

On 20 November 1945 the surviving leaders of the Nazi regime went on trial in the Bavarian city of Nuremberg.

By the time the trial began Hitler, Goebbels and Himmler were already dead but Hermann Goering was joined in the dock by Hitler’s deputy Rudolf Hess, foreign minister Joachim von Ribbentrop and 21 other prominent Nazis.

© CC0
View of the defendants in the dock at the International Military Tribunal trial of war criminals in Nuremberg, Bavaria, Germany

Martin Bormann was also convicted in absentia. His remains were found in Berlin in 1972 but he is believed to have died in 1945.

Nuremberg was a military tribunal whose eight judges represented the allied powers - two each from the United States, Britain, France and the Soviet Union.

On 1 October 1946 twelve of the defendants were sentenced to death, seven received long prison sentences and three were acquitted.

The Cold War was in full swing and Senator Joe McCarthy was carrying out a furious witch-hunt when Julius and Ethel Rosenberg were arrested and accused of spying for the Soviet Union.

Julius Rosenberg was accused of spying for the KGB while working at the US Army Signal Corps Engineering Laboratories and later recruiting others, like his brother-in-law David Greenglass who worked at the US nuclear weapons facility at Los Alamos in New Mexico.

Greenglass also accused his sister, Ethel, but would later tell a New York Times journalist he had only implicated her in exchange for his wife’s immunity.

The Rosenbergs were both found guilty of espionage and Judge Irving Kaufman overruled FBI director J. Edgar Hoover - who had hoped Ethel would be spared and persuaded to identify her handlers - and sentenced both to death.

On 19 June 1953 the Rosenbergs were executed by electric chair at Sing Sing prison in upstate New York amid uproar in liberal circles.

Court TV was launched in the United States in 1991 and four years later it got lucky when Orenthal James Simpson, a former American football star who had a follow-on career in Hollywood, went on trial for the murder of his ex-wife Nicole and her new boyfriend Ron Goldman outside their condominium in the suburb of Brentwood.

OJ Simpson was a household name and the evidence against him was overwhelming.

But his defence team, led by Johnny Cochran and assisted by Kim Kardashian’s father Robert, managed to convince a largely African-American jury that OJ was the victim of a frame-up led by Detective Mark Fuhrman.

In November 1995 viewers across America and around the world watched in astonishment as Simpson was found not guilty and walked free.

He was later found liable in a wrongful death lawsuit and was ordered to pay the Goldman family US$33 million.

In November 2007 Meredith Kercher, a British student, was found dead in her apartment in the Italian city of Perugia. He throat had been cut and she had been sexually assaulted.

Guede was convicted of rape and murder in 2008 but the following year Knox and Sollecito go on trial, with the eyes of the world on Perugia.

Knox claimed she was beaten by Italian police during her interrogation and says the allegations against her are “pure fantasy”.

Giving evidence, she says: "I'm afraid of having the mask of a murderer forced onto my skin."

But that was not an end to the drama.

In 2011 an appeal court quashed their convictions and both were freed and Knox returned home to the United States.

Then in 2013 the acquittals are overturned by Italian judges who later reinstate the guilty verdicts.

By then Knox is safe in the US and refusing to return and Italian justice has become a laughing stock.

In 2015 Italy’s Supreme Court of Cassation decided Knox was innocent after all.