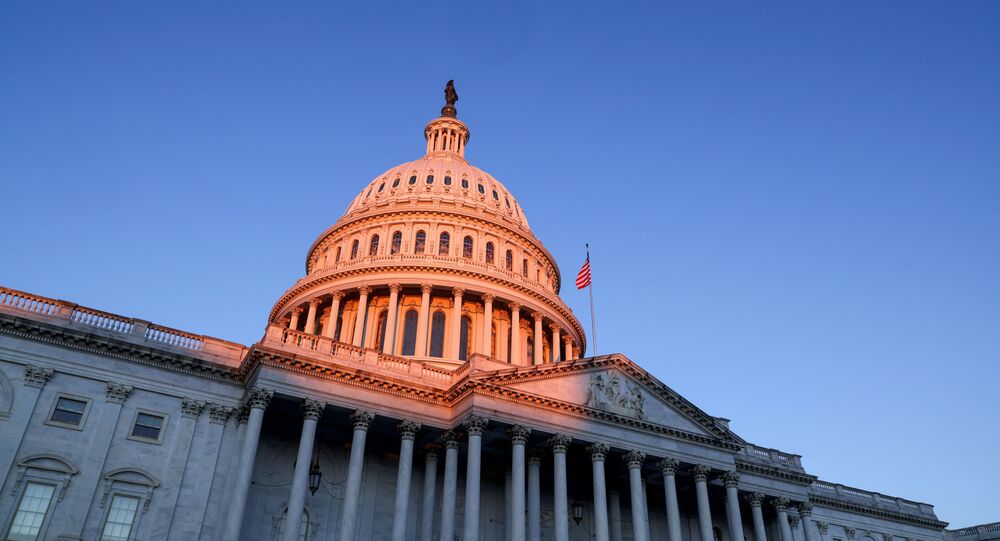 Put in place for public health reasons, Title 42 played a significant role in keeping migrants out of the US.

Two Republican representatives, Texas' Chip Roy and New Mexico's Yvette Herrell, have moved to force a vote in the House on a bill to keep the Trump administration’s public health order in place until the US Centres for Disease Control and Prevention (CDC) lowers the traveller health risk for Canada and Mexico, and until COVID restrictions and public health emergencies are lifted.

The order Title 42, which allows a rapid expulsion of migrants at America's southern border, was put in place by the CDC in March 2020. The Trump administration-era order was a response to the pandemic.

Roy filed a discharge petition to force a vote on Herrell’s PAUSE Act in the House, where Democrats hold a slim majority.

© AP Photo / Isabel Mateos
US Border Patrol Council Chief Reveals Why Kamala Harris 'Avoids' Visiting Migrant-Hit South
The move comes amid an escalating crisis on the US southern border, with the number of arrests by federal agents there topping 100,000 in February, while  172,000 migrants were "encountered" by officials in March.

Biden used the word “crisis" to describe the situation on Saturday, but on Monday the White House clarified that he meant that there was a crisis in Central America which people are fleeing. Previously, the US president told migrants “don’t come” in an interview with ABC News and cited COVID restrictions.

Since coming into office, Biden has reversed several Trump-era immigration policies, such as the “Remain in Mexico” policy, which requires that migrants from Central American countries to wait for asylum hearings outside the US. He also stopped the construction of the border wall and suspended the so-called “Asylum Cooperative Agreements” with Guatemala, Honduras, and El Salvador.

Trump had to declare a national emergency to secure funds to build a barrier on the border with Mexico, after massive caravans of migrants from Central American countries seeking asylum began to move toward the US through Mexico in the fall of 2018.

Mexico later agreed to tighten controls on its northern border following a steady rise in punitive import tariffs. In the final three months of 2019, as reported by US Customs and Border Protection, arrests of illegal border crossers from the three Central American nations slowed to about 10,000 per month, compared with previous monthly rates exceeding 100,000 a month.