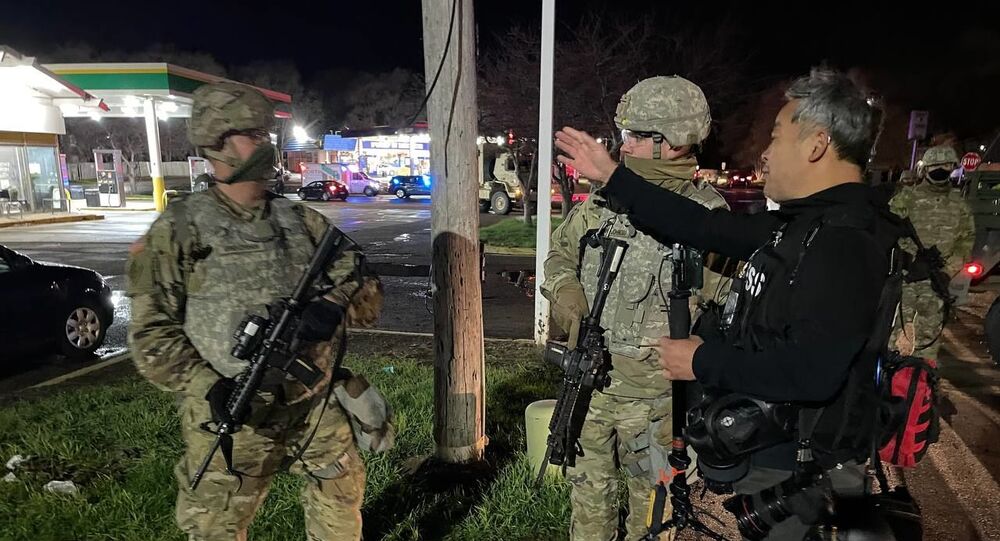 Minnesota Police in Hot Water Over Treatment of Reporters at Wright, Floyd Protests

MOSCOW (Sputnik) - Minnesota police have been accused of harassing journalists at anti-racism protests that swept the Minneapolis area after an officer fatally shot young Black man Daunte Wright just 11 miles away from where George Floyd died while in custody last May.

Wright, 20, was killed by white female officer Kimberly Potter, 48, in the city of Brooklyn Center during a traffic stop on April 11. The video of the incident showed Potter thought she was firing her taser instead of her handgun.

Wright’s death sparked protests in Minnesota and coincided with a trial for the killing of George Floyd, a 46-year-old Black male who died in Minneapolis after police officer Derek Chauvin knelt on his neck for over eight minutes.

The latest instance of a Black man killed by an officer added to the tensions in Minnesota, prompting anti-racism protests to resume with renewed vigor.

Media, however, alleged that police have continued to obstruct the work of reporters even after the court issued the temporary restraining order that forbade officers from using physical force and arresting media workers.

Over 20 news outlets then asked Minnesota Governor Tim Walz to intervene, detailing a series of assaults that allegedly saw journalists being pepper sprayed, arrested, thrown to the ground and beaten by officers.

On Sunday, Walz denounced the alleged assaults on journalists, telling CBS Minnesota: "Apologies are not enough, it just cannot happen."

The same day, the Democratic governor convened a meeting with media and law enforcement to "determine a better path forward to protect the journalists covering civil unrest."

"A free press is foundational to our democracy. Reporters worked tirelessly during this tumultuous year to keep Minnesotans informed," he wrote on Twitter.

He also directed law enforcement to "make changes that will help ensure journalists do not face barriers to doing their jobs."

The Minnesota State Patrol (MSP) announced on Saturday that they had updated guidance on reporters during protests in line with the temporary restraining order.

Police also agreed not to photograph journalists or their credentials, noting that they would continue to check credentials, "so media will not be detained any longer than is necessary."

"During recent enforcement actions in Brooklyn Center, troopers checked and photographed journalists and their credentials and driver's licenses at the scene in order to expedite the identification process. Journalists were then allowed to continue reporting. This process was implemented in response to media concerns expressed last year about the time it took to identify and release journalists," the MSP explained.

"The MSP has not and will not target media for doing the important work," the statement added.