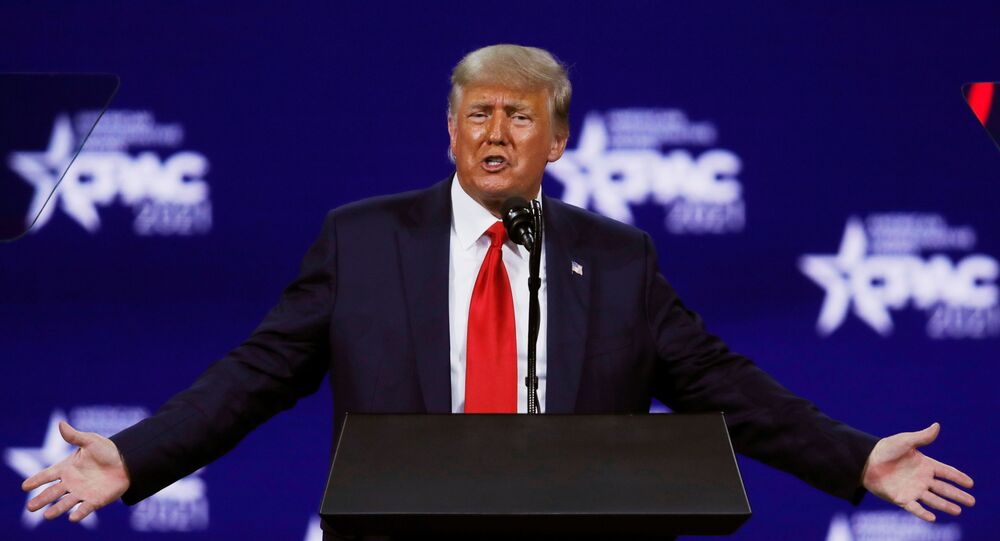 Donald Trump has dropped hints about running for office again, telling his daughter-in-law Lara Trump - now a Fox News paid contributor – in an interview on “The Right View” on 30 March that his supporters "do have hope" that he will run for president again in 2024.

Former POTUS Donald Trump has acknowledged that he is “beyond seriously” considering running for president again.

​As Trump was pressed by host Sean Hannity in an exclusive, hour-long Fox News interview, on the possibility of running for office at the conclusion of President Joe Biden's first term, Trump reacted by saying:

"First of all, it's [in] a long time… Look, I've got tremendous numbers ... there is more popularity [for me] now than there was the day before the election, because they see how bad things are at the border. They see what is going on, they see that their guns are gonna be gone ... their taxes are going up. Regulations are going through the roof. Job [losses] are going to go up..."

Reiterating that he was looking at the prospect ‘beyond seriously’, he added:

"… From a legal standpoint, I don’t want to really talk about it yet. it's a little too soon."

The 45th President underscored that his decision would also hinge on getting “the right people" in on Capitol Hill.

"It's very important that we get the right people. That means in the Senate, that means in the House," said Trump, as he declared he was "all in" to campaign on behalf of Republican candidates in next year's midterm elections.

Asked by the host to reflect on the aspects that he misses the most about the presidency since exiting the White House, Trump acknowledged that he missed “helping people” the most.

"That's why I did it. Look, this has been very traumatic. I had a great life, great company, great business, no problems and now all I do is, people go after you. It's vicious, it's horrible but you know what? I loved doing it because I helped people. And I've helped them more than any president," said the ex-POTUS in the interview.

Summing up his best, in his opinion, accomplishments, Trump touted his $1.5 trillion package of corporate and individual tax cuts, while adding that he hopes the administration of Democrat Joe Biden doesn’t "screw it up."

Expounding on the future of the Republican Party in his first major TV interview since leaving the White House, Trump suggested it depended to a vast degree on whether it can rally behind the "Make America Great" (MAGA) platform to retake Congress in 2022 and beyond.

Critics have been arguing that the Republican party (GOP) is increasingly fractured between MAGA loyalists and classic conservatives.

Trump hailed aspects of the 2020 November presidential election that ostensibly pointed to extended support for the GOP beyond their typical precincts.

When questioned by the host if the GOP’s future success possibly lay with candidates running on the conservative platform Trump espoused in 2016, rather than that of the establishment Republicans like ex-Florida Gov. Jeb Bush or ex-Ohio Gov. John Kasich, the former POTUS said:

While admitting that the Republicans “have to unify," pointing to the failed attempt to ensure ObamaCare was fully repealed when the late Sen. John McCain, R-Ariz., issued a "thumbs down" signal during the vote, Trump insisted that the Republican platform was resonating.

Donald Trump claimed Republicans were projected to lose seats in the House but instead gained more than a dozen, while not a single incumbent congressman lost, as he had made sure to ‘campaign hard’ for all candidates.

As for the Senate, the 45th POTUS claimed that 8 more Republican senators would have lost in 2020 if he hadn't gotten on board, including “Mitch."

"We are going to help with the House [in 2022]… I think we have a really good chance. I'm working with everybody including Kevin McCarthy. Likewise, the Senate is going to be a little bit tougher," said Trump.

Donald Trump earlier told his supporters that they “do have hope” that he will run for president again in 2024, as he was interviewed by his daughter-in-law Lara Trump on 30 March on Fox News.

​In the interview on “The Right View”, posted online but removed from Facebook and Instagram due to the former president's ban from the platforms, Trump said:

Previously, Donald Trump teased a potential fresh run for office at the Conservative Political Action Conference in Orlando in late February, saying that he may "beat them (the Democrats) a third time".

The former US President has repeatedly rejected Democratic candidate Joe Biden's win in the 3 November 2020 presidential election, which Trump claimed was “rigged” against him and was the most corrupt vote in American history.

Donald Trump was accused of “inciting an insurrection” and impeached a second time by the US House of Representatives after the 6 January “Stop the Steal” rally in Washington in his support morphed into a riot that left five people dead.

The former US president dismissed any responsibility for the crowd breaking into the Capitol as lawmakers had been working to formally confirm the results of the 2020 presidential election, saying that what he said was “totally appropriate”.

Trump was later acquitted by the US Senate.

Get in Formation: Trump Says Republican Candidates Should Embrace MAGA 'If They Want to Win'