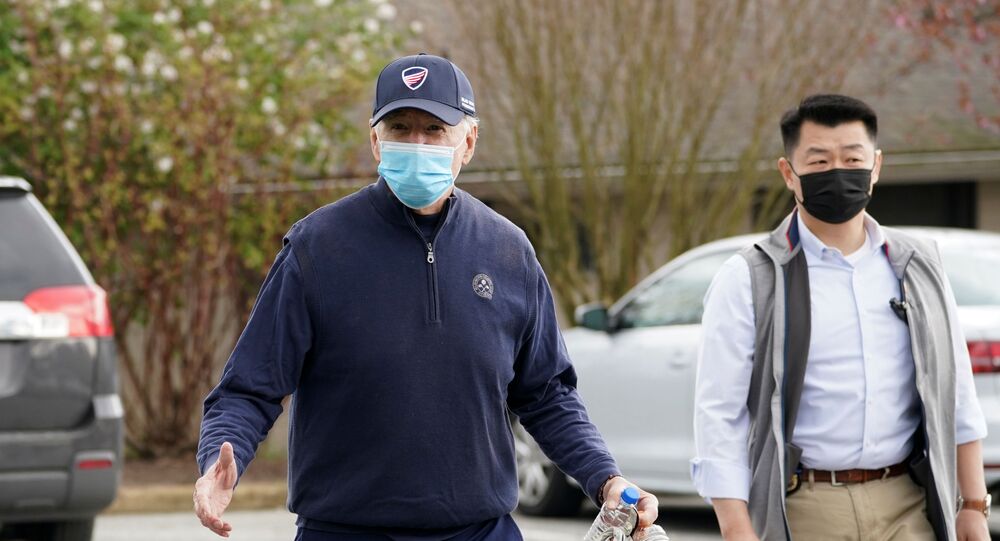 The White House routinely refuses to describe crowded detention centres on the US border with Mexico, especially those housing minors, as a "crisis". Although it made an occasional slip-up in the past, the administration so far has consistently walked back the term.

The White House backtracked on language used by US President Joe Biden on 17 April as he spoke about a "crisis" of migrants flooding the US southern border with Mexico. A White House official told CNN that POTUS was not referring to the humanitarian situation in crowded detention centres and reportedly stretched-thin Border Patrol forces when he spoke of a "crisis" but rather was referring to the state of affairs in the Central American countries, which contribute to the high rate of migrants headed to the US.

"We’re going to increase the number [of refugees allowed into the country]. The problem was that the refugee part was working on the crisis that ended up on the border with young people. We couldn’t do two things at once. But now we are going to increase the number", Biden said on 17 April in a speech, which the White House claims referred to Central American states.

The administration official cited by the news network added that there has been "no change in position" regarding the situation at the border. White House Press Secretary Jen Psaki repeated the official's approach in her 19 April statements. The spokeswoman mentioned "violence, economic hardships, and other dire circumstances" in the Central American countries as a "crisis", but not the complicated situation at the US border with Mexico.

"[Biden] does feel that the crisis in Central America - the dire circumstances that many are fleeing from - that that is a situation we need to spend our time or effort on and we need to address it if we're going to prevent more of an influx of migrants from coming in years to come", Psaki said.

The Biden administration has consistently avoided calling the situation at the border a "crisis", despite Republicans and some media outlets insisting that it is one. In this light, the president's use of the word on 17 April attracted media attention as a potential sight of a shift in view.

Despite avoiding the word in conversation about the unfolding situation, where thousands of migrant children are claimed to be crammed in detention centres, the White House press secretary made a slip of the tongue in March referring to it as a "crisis". Psaki quickly corrected herself in a follow-up question, and refused to "put new labels" on the situation at the border.

The administration has drawn criticism from opponents over its handling of the influx of migrants, which, according to federal statistics overshadow the numbers for the last 15 years. The White House claims that the numbers do not exceed those seen under the previous president and blame Trump policy for the current events. At the same time, the administration and the president himself refuse to accept the idea of a link between the influx with Biden's promises of changing immigration laws to favour illegal migrants.