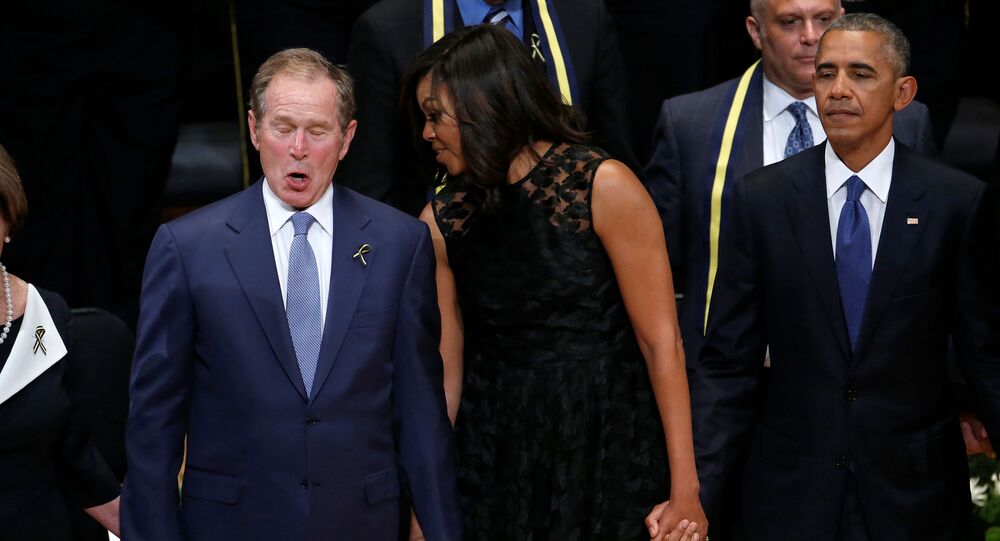 His warm relations with the former first lady did not escape cameras, which specifically noted how the former Republican POTUS apparently passed candy to Michelle Obama. Her husband, former President Barack Obama, said the two were "partners in crime" during social events.

Former Republican President George W. Bush has shared in an interview with CBS News that he was "shocked" to learn that some American people were surprised to see him being friends with the wife of his Democratic successor, Michelle Obama.

"I think it's a problem that Americans are so polarised in their thinking that they can't imagine a George W. Bush and a Michelle Obama being friends", Bush said.

The two were famously spotted hugging during the opening of the National Museum of African American History and Culture in 2016, but another encounter of the two became even more viral. During the funeral of former Senator John McCain in 2018, Bush sneakily passed Michelle Obama some cough drops. That moment was caught on camera and copies of the footage quickly went viral online leaving many netizens surprised.

© AP Photo / Andrew Harnik
Biden Spoke to Bush, Obama Prior to Announcing Pullout of US Troops From Afghanistan

Michelle's husband, ex-POTUS Barack Obama said that Bush was a regular "partner in crime" of the former first lady during social events. Michelle Obama, in turn, noted that due to protocol they are always sitting next to each other during these events, but added that she loves Bush "to death" calling him a "wonderful" and "funny" man.

Bush, in turn, revealed in an interview in 2017 that he is on good terms with Barack Obama too. The Republican ex-POTUS said that Obama "kind of likes" his famous sense of humour and added that he normally gets along with people who do that.