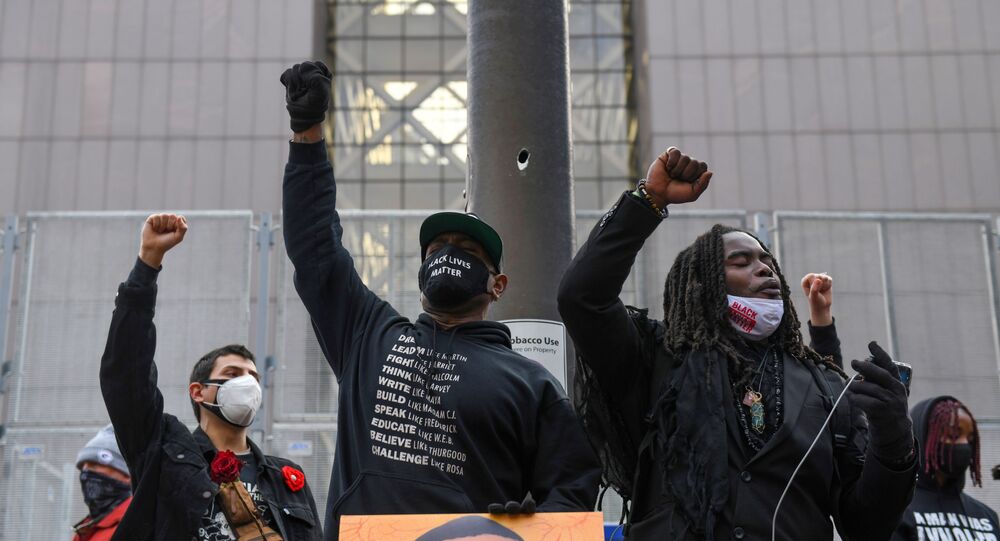 Derek Chauvin Trial Verdict: Security Beefed Up Across US Cities Ahead of Possible Unrest

Derek Chauvin was arrested in May 2020 after he knelt on the neck of African American man George Floyd for over eight minutes during his arrest, resulting in the man's death. The incident sparked a wave of racially-charged protests across the US.

Minneapolis and other US cities are bracing for potential civil unrest as Derek Chauvin's trial enters its final phase and the jury's verdict is expected this week.

A veteran of the Minneapolis Police Department, Chauvin faces a maximum of 40 years in prison if convicted in the second-degree murder of an African American, George Floyd, in May 2020. The policeman, who pleaded not guilty, is accused of kneeling on the handcuffed 46-year-old's neck for almost nine minutes as the Black man complained he "couldn't breathe".

© REUTERS / NICHOLAS PFOSI
Protesters march through downtown Minneapolis during the "I Can't Breathe" Silent March for Justice a day before jury selection is scheduled to begin for the trial of Derek Chauvin, the former Minneapolis policeman accused of killing George Floyd, in Minneapolis, Minnesota, U.S. March 7, 2021.

Minneapolis Mayor Jacob Frey said late last week that about 2,000 National Guard members along with 1,100 law enforcement officers are on standby to respond to possible riots.

"We are also strongly encouraging that if those people who want to express themselves see something, that they say something. We don't want small groups of individuals with malicious intent to hijack what would otherwise be a peaceful demonstration", he pointed out.

Additional police forces will also be deployed in San Francisco, while the Atlanta Police Department pledged to coordinate actions with local, state, and federal law enforcement, adding that they had instructed officers to quickly retaliate against potential unrest.

Also bracing for protests is New York City, where Mayor Bill de Blasio said that "we're in constant, literally daily conversations" and that "obviously, so much will happen based on what the verdict is and how it's expressed".

© REUTERS / NICHOLAS PFOSI
Officers stand guard outside Brooklyn Center Police Department with trash thrown at them by demonstrators at their feet after police allegedly shot and killed a man, who local media report is identified by the victim's mother as Daunte Wright, in Brooklyn Center, Minnesota, U.S., April 11, 2021.

The Philadelphia Police Department made it clear that they are prepared to tackle unrest "with additional personnel to secure and patrol strategic locations".

As for police in Washington, DC, Metropolitan Police Department spokesperson Hugh Carew vowed that officers will be "fully activated with members on 12-hour shifts starting Monday".

Police preparations come a week after mass riots in the city of Brooklyn Center in Minnesota, where protesters clashed with police over the killing of 20-year Black man Daunte Wright by then-Brooklyn Center Police Department (BCPD) officer Kim Potter on 11 April.

© REUTERS / SHANNON STAPLETON
George Floyd Trial Jury Told How Police Officer Derek Chauvin Did Not 'Let Up Or Get Up'
BCPD Chief Tim Gannon described the 11 April incident as an "accidental discharge", claiming that the officer had intended to strike Wright with her department-issued stun gun rather than firearm.

Last year, a wave of protests against policy brutality swept through the US following the death of George Floyd in police custody in Minnesota. Many of the protests turned into riots, with violence against police and civilians as well as acts of looting, property damage, and arson.

Do You Believe in Tweets After Tweets? Cher Apologises Again After Saying She Could’ve Helped Floyd