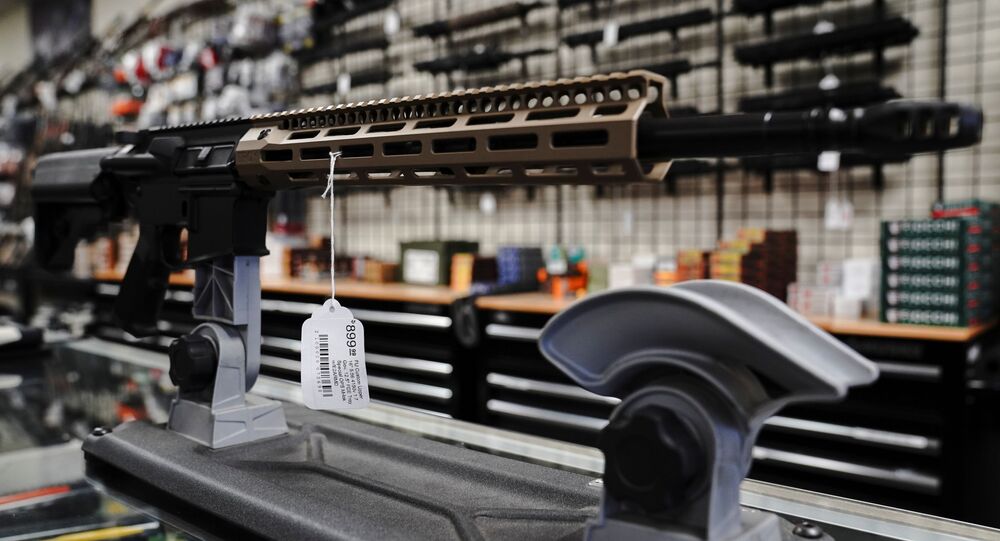 During the first three months of this year alone, the US witnessed over 100 mass shooting incidents, according to the Gun Violence Archive. These numbers, despite slowly becoming the "norm" in the US, sound bizarre to people in other countries.

Thursday evening in the US was marred by reports of a new mass shooting that left eight people dead at a FedEx Ground building in Indianapolis, Indiana after a gunman armed with two assault rifles fired bullets at the facility for reasons that remain unclear. The shooting became one of 100 other similar violent incidents that have taken place since the beginning of the year, according to the Gun Violence Archive non-profit organisation.

Deadly mass shootings in the US have in the last decade started to no longer come as a surprise. And an analysis of the statistics from recent years reveals why – there has been a rise in the number of such incidents, and even more so in their lethality.

WOW! Check out this mass shooting graph compiled by MotherJones!!!
Gotta ask yourself "What happened in 2017 to impact the frequency of mass shootings in the US, SO dramatically?!
🤷‍♀️ pic.twitter.com/uvzuluXYlF

Something that makes the mass shooting phenomenon in the US more remarkable is the fact that they occur far less often in other countries. A 2016 study by the Violence and Victims journal reviewed mass shootings across the world between 1966 and 2012 and concluded that the United States held a solid "first place" in the number of such incidents by a large margin compared to other countries.

The Violence and Victims study found records of 90 mass shootings in the US during the 45-year period that was examined, compared to 10 in France, 15 in Russia, and 18 in the Philippines in the same timeframe.

Despite differences in how to define an event as a mass shooting, the study also indicates how they have become more common in the US following the studied period.

How Can This Discrepancy Be Explained?

Many theories exist that try to explain how the US has become the leader when it comes to the number of mass shooting events and holds a top position in terms of their lethality. Some experts have hinted at the vast amount of guns owned by Americans. A 2018 study by the Small Arms Survey found that for every 100 US citizens, at least 120 guns existed (and that only takes into account those that are officially registered). In addition to this, a Gallup poll showed a couple of years ago that only 42% of Americans have a gun, meaning that the average US gun owner may be holding at least two guns in their safe.

The Small Arms Survey also compares the US’ result with that of other countries – civil war-torn Yemen follows after the United States, but with its roughly 0.5 guns per capita, or 50 guns per 100 people, it comes nowhere near the US. The other countries included in the top 20, such as Uruguay, Serbia, Lebanon, Austria, Norway, and Switzerland, have fewer than 40 guns per 100 people. The remaining countries included in the study have less than 0.2 guns per capita. Some studies have found a certain correlation between the amount of guns per capita and the number of mass shooters, although a causal link does not appear to fit in every case.

Other experts, and notably the US Democrats, believe that the problem of frequent mass shootings can be resolved, at least partially, with gun control laws and that their lethality can be reduced with a ban on assault weapons in the country.

Some of the countries that ranked behind the US in the number of mass shooting incidents do indeed have stricter gun laws. A hunting license in France, where it is relatively easy to get one, will just let you use single-shot firearms – and even then only after undergoing physical and mental evaluation. A handgun or semi-automatic rifle would require not just an evaluation, but also firearms training and passing background checks, with the license expiring after five years if it is not renewed.

While Russia has more liberal gun laws than some other countries, even there a hunting license (which can be obtained after undergoing firearms training and passing rigorous tests) will only allow you to own smooth-bore firearms and pneumatic weapons with limited magazine capacity. The right to own a rifle can be earned after five years (assuming you have not had any firearms-related incidents or been convicted of a crime), but even then a Russian citizen can only own a handgun if they store it at the shooting club where they use it. The country also forbids citizens from owning automatic or burst-fire weapons, as well as those with suppressors installed. Most shooting accidents in Russia do not occur in public spaces, but on the territory of military facilities.

However, it is unclear whether the Democrats’ latest proposal to ban “assault weapons” will have an effect in the United States. The country previously had such a ban in place between 1994 and 2004, and it was passed with the help of none other than then-Senator Joe Biden. But the number of deaths in mass shootings barely changed compared to the period preceding the ban – and even spiked in 1999, the year of the notorious Columbine High School massacre, in which 13 people were killed by shooters using semi-automatic pistols, a carbine, and shotguns. Notably, the attackers had bought the carbine and the shotguns in circumvention of the existing checks, when they were both still underage.

Here is a graph of the US mass shooting deaths before, after and during the last federal assault weapon ban. pic.twitter.com/foKLmSIPPi

A law proposed by the Democrats in 2021 seeks to ban AR-15-style rifles and various modifications to other weapons that could make them potentially more deadly. However, the proposed legislation stops short of limiting the ability to acquire handguns, which are used in around half of the gun-related murders in the US. But even then, the bill is expected to face fierce opposition in Congress: both Republicans and the National Rifle Association insist that such a ban would violate law-abiding citizens' Second Amendment rights.