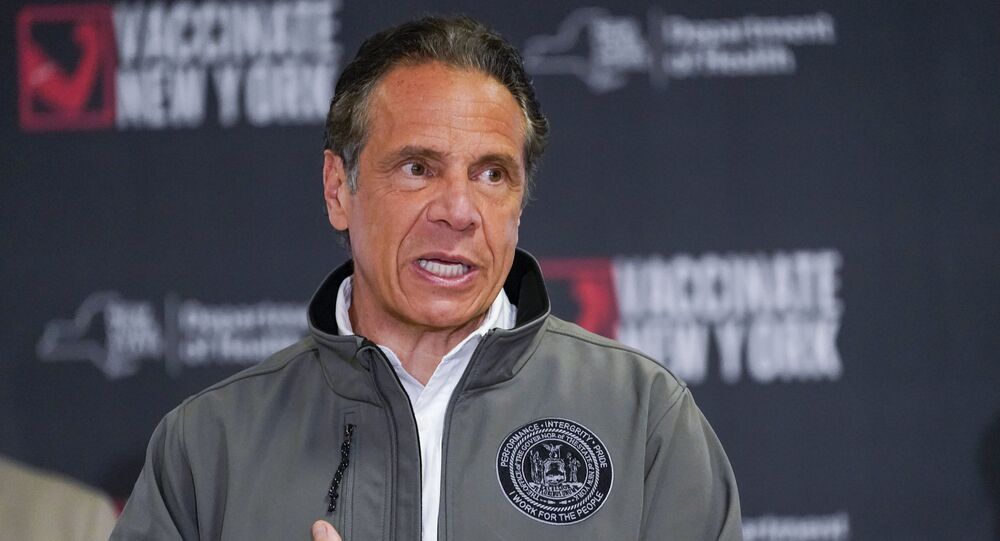 Cuomo announced the development of the hand sanitizer last March, at the start of the coronavirus pandemic, which would be created by prison inmates in New York facilities and based on a 75% Isopropyl alcohol-based formula.

The governor of the state of New York, Andrew Cuomo, praised himself as the driving force behind the New York State-branded hand sanitizer produced for the state residents as he promoted it at his press conference on Friday, Fox News reported.

The Democrat governor spent a portion of his press conference boasting that he invented the floral-scented substance and joking with female reporters that the government germ-killer is better than anything on the market.

"How remarkable was this product," Cuomo reportedly said to a local New York reporter who confessed to having tried the hand sanitizer. "Maybe I didn't invent Google, but I did invent New York State Clean hand sanitizer."

According to Fox News, the reporter agreed with the governor and chuckled.

"Put that in my eulogy," Cuomo jested.

Local reporters had inquired about access to the latest broadband program and coronavirus restrictions. Cuomo also reportedly asked two female reporters about their use of NYS Clean hand sanitizer while holding up his bottle for the camera.

When a reporter pointed out that she already had plenty of hand sanitizers, Cuomo insisted that she needed his because it's "much better," as he went on to list three reasons for this.

"Second, my hand sanitizer has a special scent that also clears the sinus passages, so you're not only sanitizing your hands you're also clearing your sinus passages at the same time," Cuomo continued with banter. "Third, mine is free."

Fox News states that Cuomo was then asked about the broadband initiative and gun violence in New York, but the governor, who seemed amused by his own joke and confident of avoiding awkward questions, found a way to return to his prop.

"I'm going to bring you the purse size New York State Clean [santizer]," Cuomo said. "... I want you to have this."

Cuomo concludes his press conference by saying that he will bring Kramer a bottle of purse-sized hand sanitizer next week.

According to the report, the hand sanitizer promoted by the governor is produced by NY prison inmates who allegedly work for 65 cents an hour, while the state's minimum wage currently stands at $12.5 per hour.

© REUTERS / Seth Wenig
‘That Wasn’t Just a Hug’: Cuomo Accuser Details Years of Grooming, Alleged Groping Incident
The germ-killer manufacturing line began as a means of combating price gouging and sanitizer shortages. The "NYS Clean Hand Sanitizer," manufactured by prisoners, was supposed to be free to New York residents and distributed to state and local government agencies and prisons.

Over the recent months, Cuomo has found himself in the middle of several scandals. At least eight women, including those with whom he previously worked, have turned against him with accusations of sexual harassment and inappropriate behavior, and the state's attorney general has opened an investigation. Cuomo himself said he was not going to resign and urged to wait for the results of the investigations. According to him, he did nothing of what he is accused of.

In addition, in early February, another scandal emerged involving the alleged withholding of data on the actual number of deaths due to COVID-19 in nursing homes. The New York Times reported that Cuomo's inner circle was involved in falsifying the death toll. Cuomo himself stated that the authorities of New York State have always and fully reported all these cases. He also noted that everything possible was done to save people.