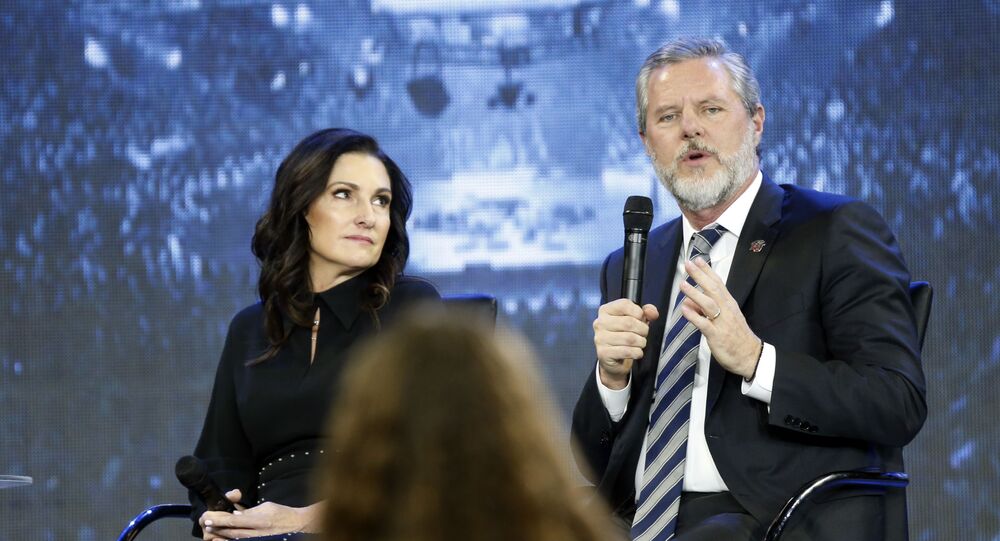 Last year, Jerry Falwell, Jr. abruptly resigned from Liberty University, one day after a pool attendant revealed to the public that he allegedly had a yearslong sexual relationship with Falwell’s wife, Becki, and that Falwell had taken on the role of a voyeur. Falwell has repeatedly rejected the allegations.

Liberty University, an evangelical Christian institution based in Lynchburg, Virginia, has filed a lawsuit against Falwell, accusing the private school’s former president and chancellor of undermining its moral standards.

The lawsuit, which was filed on Thursday at the Lynchburg Circuit Court, accuses Falwell of having committed three offenses, specifically that the once influential official had breached his contract, fiduciary duty and allegedly violated his statutory duty.

The complaint directly blasts Falwell for negotiating a hefty new contract for himself in 2019 under false pretenses, and for withholding potentially damaging details from the university’s board of trustees of his personal scandal that made headline news in 2020.

The scandal itself focused on allegations voiced by Giancarlo Granda, a pool attendant who later became involved in a relationship with the Falwells that started in 2012. In an exclusive tell-all with Reuters, Granda detailed that the sexual encounter took place “multiple times per year” at hotels in Miami, New York and even at the family’s Virginia home.

However, the arrangement later came to an end after Granda wanted out, especially once a business disagreement emerged among the trio.

The scandal came to light in August 2020, when Falwell revealed to the Washington Examiner that his wife had an extramarital affair with Granda, and that Granda threatened to speak his truth if he was not given a hush payment of sorts. Additional details of the sexual arrangement were aired by Reuters.

At the time, Falwell was already on a leave of absence from his Liberty University post after images appeared on social media showing him alongside his wife’s assistant, as the pair both had their pants unzipped. In the wake of the Granda revelations, Falwell eventually resigned from his university post.

In the lawsuit, Liberty University officials note that Falwell’s actions caused setbacks in the school’s enrollment, fundraising and damaged the institution’s reputation, among other troubles. “Despite his clear duties as an executive and officer at Liberty, Falwell Jr. chose personal protection,” the suit reads.

Falwell is cited as improperly mixing his duties to the university with his personal life, full well knowing that “infidelity, immodesty, and acceptance of a loose lifestyle would stand in stark contrast to the conduct expected of leaders at Liberty.”

Liberty is seeking compensatory damages of $10 million, which can be tripled under Virginia law, plus punitive compensation. Additionally, the suit is requesting that Falwell return a variety of devices belonging to the school, including phones and computers.

© AP Photo / Steve Helber
This Tuesday March 24, 2020 file photo shows s sign that marks an entrance to Liberty University as students were welcomed back to the campus during the coronavirus outbreak in Lynchburg, Va. Liberty University sued Virginia Gov. Ralph Northam on Friday, Jan. 8, 2021 accusing his administration of wrongfully denying financial aid to some of the evangelical school's online students.

In remarks to journalist Megan Stack, Falwell said that the lawsuit was “yet another attempt to defame me and discredit my record, following a series of harsh and unnecessary actions against my children, Becki, and me.” The former university president also underscored that the suit was “full of lies and half truths.”

The latest development came just one day after Falwell’s son, Trey, stepped down as the Liberty University’s vice president. Details of the departure have not been made available.

Falwell’s father, Jerry Falwell Sr., founded the university in 1971 based on his principles as a Southern Baptist minister. The school, which maintains strict morality rules, came under the leadership of Falwell Jr. after his father's 2007 death.

Trump Going to Give Commencement Speech at Liberty University