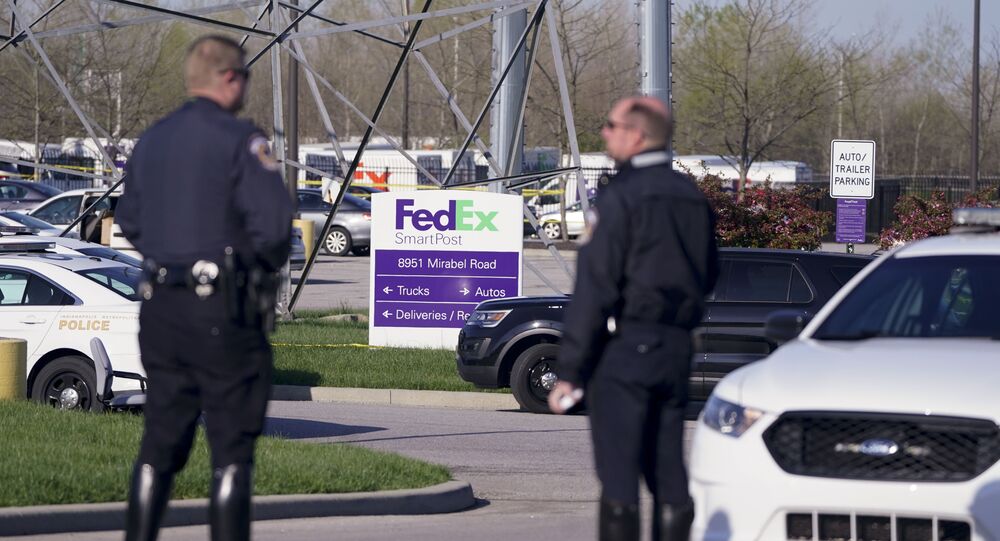 During a Friday morning news conference, IMPD Deputy Chief Craig McCartt provided reporters with a brief timeline of events, based on eyewitness accounts and a preliminary investigation.

"Suspect came to the facility, and when he came there he got out of his car and, pretty quickly, started some random shooting outside the facility," the deputy chief said. "There was no confrontation with anyone that was there, there was no disturbance, there was no argument. He just appeared to randomly start shooting."

After receiving reports around 11 p.m. local time on Thursday night, responding officers arrived to a "chaotic and active crime scene" that had multiple victims, both living and deceased, according to McCartt.

The deputy chief confirmed the shooting began in the parking lot and ended in the FedEx facility. It was reported that four bodies were found inside and another four bodies, including that of the alleged gunman, were located inside the facility.

Authorities believe the gunman died from a self-inflicted gunshot wound.

© AP Photo / Michael Conroy
A body is taken from the scene where multiple people were shot at a FedEx Ground facility in Indianapolis, Friday, April 16, 2021. A gunman killed several people and wounded others before taking his own life in a late-night attack at a FedEx facility near the Indianapolis airport, police said.

McCartt noted it would be "several hours" before the crime lab could finish processing evidence from the scene.

Paul Keenan, special agent in charge of the Federal Bureau of Investigation's (FBI) Indianapolis Field office, emphasized that it would be "premature" to speculate about a motive at the current time. At the same time, authorities do not believe there is any related threat remaining.

"FBI personnel are assisting the crime scene, conducting interviews, assisting on the search of the suspect's home and will provide any technical expertise requested," Keenan said.

Within hours after the news conference, two law enforcement officials familiar with the matter confirmed to the Associated Press that the shooter has been identified as Brandon Scott Hole, a 19-year-old resident of Indiana.

A number of items, including a desktop computer and other electronics, were recovered from the suspect's residence.

© REUTERS / Mykal McEldowney/IndyStar
People embrace after learning that their loved one was safe after a mass casualty shooting at the FedEx facility in Indianapolis, Indiana, U.S. April 16, 2021

As local and federal authorities attempt to find a possible motive for the mass shooting, IMPD Police Chief Randal Taylor has revealed that a "significant" number of employees at the FedEx facility belong to the Sikh community.

The Sikh Coalition, a Sikh-American advocacy group, has confirmed that "Sikh community members are among those injured and killed by the gunman in Indianapolis."

"For now, we are choosing not to share unverified information about the identity of any specific victims, nor speculate on the motive or identity of the shooter," the group said. "On the latter point, we expect that authorities will conduct a full investigation - including the possibility of bias as a factor."

US Woman Arrested for Joke About Gunman Attack on Factory, Reports Suggest