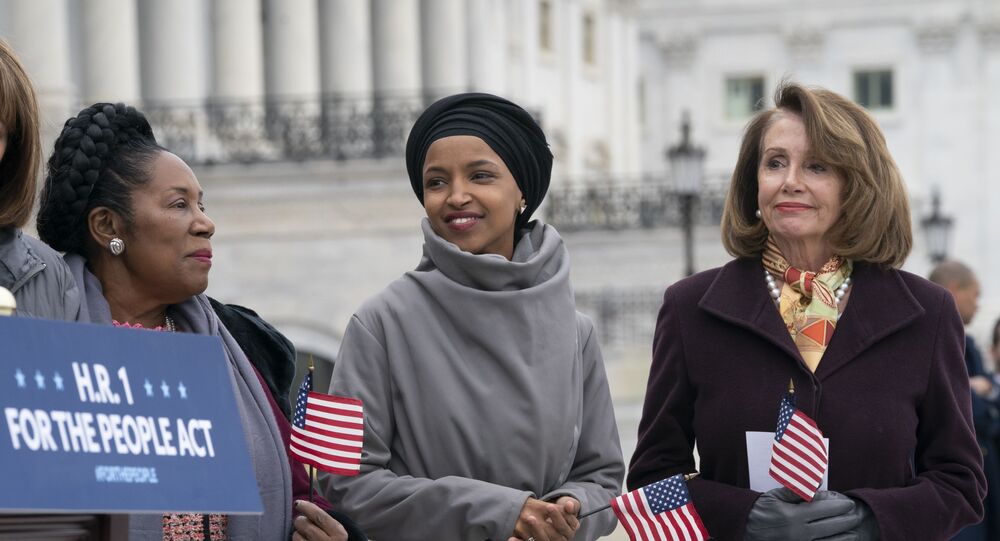 In a newly published excerpt from her upcoming book Madam Speaker: Nancy Pelosi and the Lessons of Power, to hit the shelves on April 20, the Speaker blasted the views of members of the progressive wing of the Democrats, the Squad, and specifically its prominent member, AOC. However, with one of them, Pelosi apparently developed friendly relations.

Democratic Representative Ilhan Omar of Minnesota disclosed information about her relationship with House Speaker Nancy Pelosi, revealing that the two lawmakers are actually friends, Politico reported on Thursday, revealing an excerpt from the new book.

Omar said Pelosi was one of the first people to congratulate her on her primary victory in 2018, speaking to the author, Susan Page.

"You're going to win, so we'll see you in November," Pelosi told Omar at the time, according to the outlet.

The new freshman Somali-born representative, who wears a hijab and would soon become one of the first Muslim women elected to Congress, expressed concerns to Pelosi regarding the House's 1837 headgear ban during that phone call.

"Will they amend that for me?" Omar asked Pelosi. "Would I be able to sit as a member of Congress?"

Pelosi reassured Omar that she will take care of the situation, and so she did.

© AP Photo / J. Scott Applewhite
Pelosi Reportedly Hits Out at 'Squad', Mocking Alexandria Ocasio-Cortez in 'Child-Like Voice'
According to the report, citing a book excerpt, that conversation laid the foundation for what would grow into a warm friendship between the two of them. Despite subsequent squabbles with other Squad members, which included Omar and fellow progressive Democratic representatives of color Alexandria Ocasio Cortez of New York, Rashida Tlaib of Michigan, and Ayanna Pressley of Massachusetts, Pelosi and Omar maintained good contact.

Pelosi would reportedly check in on Omar so often that Omar's aides joked, "Auntie Nancy's calling."

Top Democrats in Congress, including Pelosi, publicly called on Omar to apologize in February 2019 for tweets that critics said included anti-Semitic stereotypes. The tweets in question, which have since been deleted, seemed to imply that Republican support for Israel is motivated by financial gain.

Pelosi, on the other hand, lent a helping hand to Omar in private, and the two spoke about the situation, according to the report.

"[Pelosi] wasn't depriving me of the agency of being able to understand the gravity of whatever was happening," Omar said, adding that Pelosi was always polite and did not give her orders.

At one point, the speaker even invited Omar on a congressional trip to Ghana, which marked the 400th anniversary of the start of the slave trade to America.

Through it all, the legislators have maintained their partnership, according to the reports. Pelosi endorsed Omar for reelection in 2020, and Omar voted for Pelosi to be the House speaker in the new Congress in January.