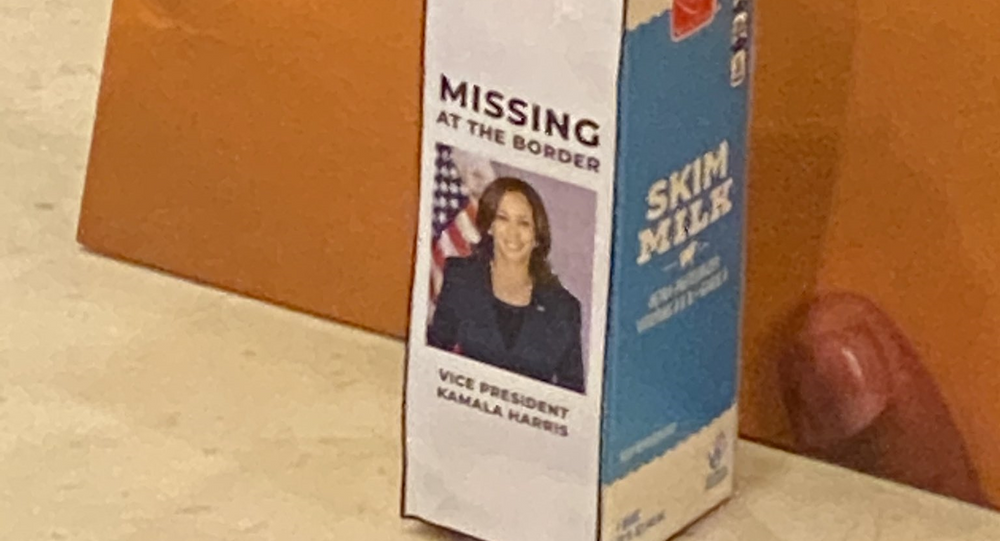 President Biden tapped his vice president to serve as his czar on border policy last month as the situation on the frontier between the US and Mexico worsened in the aftermath of the repeal of Trump-era hardline immigration policies.

Republican House Minority Whip Steve Scalise took a potshot at Vice President Kamala Harris on Wednesday, putting her face on a milk carton accompanied with the message “Missing at the Border” in a throwback to 80s-style ads once used to publicize cases of missing children.

“We’re gonna continue to raise awareness to this crisis at America’s southern border. It was exclusively created by President Biden, when he, with the stroke of a pen, right when he took the oath of office, undid policies that were working to control our southern border,” Scalise said, speaking at a press conference.

Scalise is the latest Republican to attack Harris. On Tuesday, Chad Wolf, former acting secretary of the Department of Homeland Security under Donald Trump, suggested that Harris needs to actually go to the border to “understand the conditions that are being experienced, needs to understand and talk to the men and women of the Border Patrol.”

Scalise joined other Republican lawmakers for a fact-finding trip to the border last month. While there, lawmakers spoke to border guards and other authorities, snapped photos and shot videos of the conditions where detainees are being held, with detention centers shown to be overflowing, and people forced to sleep on floors in crowded quarters.

“Here you’ve got the federal government running a facility with holding cells over 1,000 percent above capacity, where the government would shut somebody down if they were doing this in the private industry, the federal government is doing this to these young kids. It’s the definition, if you read Texas’ law, on child abuse and neglect, that’s what’s happening in that federal facility,” the lawmaker said in his Wednesday briefing.

“It’s a national disgrace and President Biden put Kamala Harris in charge of it, and she refuses to go down –maybe because she doesn’t want to be associated with this disgraceful policy,” Scalise complained.

Harris spoke with Mexican President Andres Manuel Lopez Obrador about the border situation on 9 April. On Wednesday, officials announced that the vice president would be heading to Mexico and Guatemala to determine the “root cause” of the immigration crisis.

© REUTERS / Kevin Lamarque
Trump-Era DHS Officials Chide Harris for Not Visiting US-Mexico Border Amid Migrant Surge
On Monday, Tyler Moran, special assistant to Biden on immigration policy, told MSNBC that the administration had reached agreements with Mexico, Honduras and Guatemala, with the three countries expected to use troops to beef up security on their own borders to try to help curb the inflow into the United States. Harris, Moran said, has been working with the president to develop a “blueprint” to address “the reasons that people are coming from the region.”

The White House has yet to issue any public statements on these ‘root causes,’ although it appears unlikely to conclude that decades of US interference in regional affairs, arms smuggling, support for rebels, and the overthrow of democratically-elected governments across Latin America, could be to blame.

The crisis at the US-Mexico border began shortly after Biden stepped into office and started dismantling Donald Trump’s hardline immigration policies. In February, Customs and Border Patrol agents caught over 100,000 would-be migrants. 171,700 more individuals were encountered in March, among them nearly 19,000 minors.

The Biden administration has blamed the crisis on the president’s predecessor, suggesting it had “inherited” the problem from Trump. Some officials have also suggested that the surge is “cyclical” and not tied to policy. Trump has called the current situation a “disaster,” and warned that the border crisis could “destroy our country” if not dealt with properly.

The Biden administration reversed nearly a dozen Trump-era immigration-related policies in January, ending “harsh and extreme immigration enforcement,” halting construction of the wall, promising to “restore and expand” the asylum system, and offering a “path to citizenship for the estimated 11 million undocumented immigrants already living in the US. The White House has rejected any suggestion that these decisions are responsible for the current crisis.