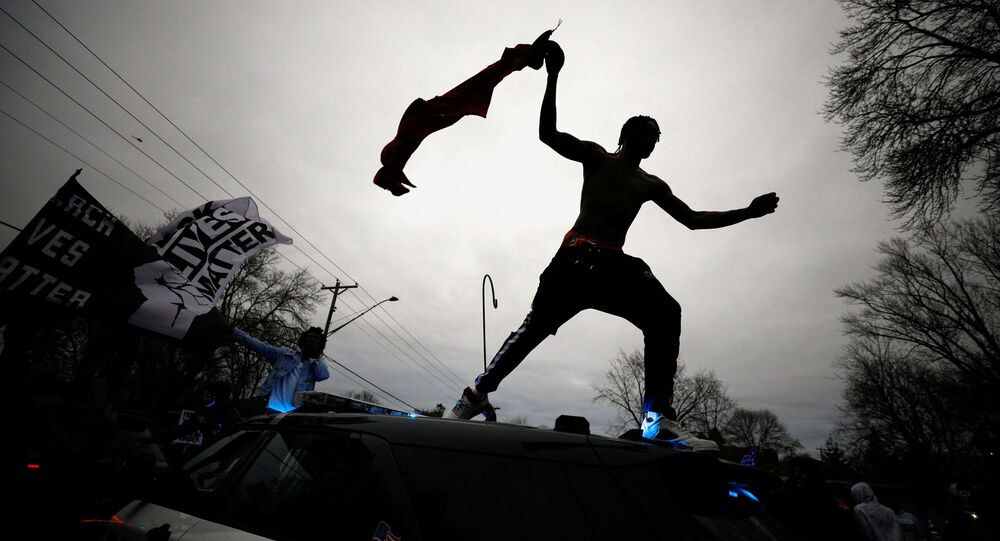 Tensions have been raging between protesters and police for a third night in a row after a Brooklyn Center, Minnesota, police officer fatally shot a 20-year-old black man, Daunte Wright, during a traffic stop Sunday, with authorities claiming it was a case of “accidental discharge”, with the cop apparently intending to fire a Taser, not a handgun.

Police in the Minneapolis suburb of Brooklyn Center faced a third consecutive night of protests over the death of 20-year-old African-American man, Daunte Wright, on Tuesday evening.

The protests had been declared an unlawful assembly on Tuesday evening, with a curfew imposed by Minnesota Gov. Tim Walz going into effect at 10 p.m. local time and set to last until 6 a.m. Wednesday.

Hundreds of demonstrators gathered in front of an FBI building in Brooklyn Center, Minnesota, on Tuesday evening, according to images posted online, with protesters climbing on top of the FBI sign and holding a banner that read: “Justice for Daunte Wright."

A little over a hundred people are gathered are gathered at the corner of Center and Penn Avenues to protest the killing of Daunte Wright last Sunday in Brooklyn Center Minnesota @PittsburghPG pic.twitter.com/WfzpwkQ9t7

​While a semblance of peace was maintained during the gatherings late on Tuesday afternoon, chaos set in after sundown at the Brooklyn Center police station. Earlier, police had erected a fence and concrete barricades around the building's perimeter.

According to reports, it was surrounded by local police, joined by Minnesota National Guard and Minnesota State Patrol officers.

Flashbangs were heard fired by law enforcement in an attempt to disperse the crowd ahead of the curfew, which crowds ignored.

Officers resorted to pepper spray and fired flash bombs at protesters, who retaliated by lobbing water bottles and other projectiles at officers in riot gear.

According to Fox News, whereas protests the previous night had been comprised of mostly locals, now members of the violent activist group Antifa were also present on the scene.

Reports suggested more people were coming in from out of town, with a reporter saying on "The Ingraham Angle":

“Several people that I spoke with who identified themselves as Antifa -- and angrily so. So you had that crowd out here… We saw an increased number of kids 'wearing the uniform' if you will, the black hoodies, the backpacks. I saw leaf-blowers out there, different kinds of ... makeshift shields and things. It was changing dramatically in terms of the makeup, and certainly the numbers of the crowd."

Minnesota authorities arrested about 40 people for violations including breaching curfew and rioting on the second night of protests in Brooklyn Center, Minn., according to authorities speaking at a news conference on Tuesday. Five businesses were burglarised in Minneapolis during the riots.

On Monday, hundreds had gathered outside the Brooklyn Center Police Department in defiance of a curfew to demand justice for Daunte Wright.

I’m out for the night but here’s two of the most surreal moments of my life from Brooklyn Center tonight. pic.twitter.com/8ZtWDEp38w

As authorities warned the crowd that they were in violation of the curfew, they fired tear gas, and flash-bang grenades, with some rioters retaliating by throwing smoke canisters and launching fireworks at the police lines, according to reports.

​Reports also said looters had broken into several businesses at a mall near the police station, including a Dollar Tree store.

Daunte Wright was killed during a traffic stop on Sunday as he was driving with his girlfriend to his older brother's house.

The man was pulled over in Brooklyn Center for an expired registration, according to the police.
When officers discovered he had an outstanding warrant, they tried to handcuff him as he was standing outside his car.

Body camera footage released on Monday shows Wright standing outside the vehicle with his arms behind his back while an officer directly behind him is trying to handcuff him, and tells Wright "don't" before he twists away and scrambles back into the driver's seat.

According to Minnesota Police Chief Gannon, who has since tendered his resignation, it appeared from the video that Wright was making an attempt to flee.

The officer whose camera footage was released is heard warning Wright that she is going to use her Taser on him, and repeatedly shouting, "Taser! Taser! Taser!"

Warning: Graphic footage, including the shooting

Here's the body camera footage of the killing of Daunte Wright that was just released. pic.twitter.com/A2X8qS8ZFH

​The cop, since identified as Kimberly A. Potter, whose career with the Brooklyn Center Police Department has spanned more than 25 years, according to the Star Tribune, is then heard exclaiming, "Holy sh*t! I just shot him."

Then Wright drive away, only to crash the vehicle several blocks away and die at the scene from a gunshot wound to the chest, the Hennepin County Medical Examiner’s office said in a statement.

Gannon insisted on Monday that body-worn camera footage led him to surmise the shooting was accidental and that the officer's actions prior to the taser mishap were consistent with the department's training on Tasers.

The Minnesota Bureau of Criminal Apprehension said Monday night that Potter is on standard administrative leave.

© AFP 2021 / KEREM YUCEL
People gather before curfew holding pictures of Daunte Wright along with Black Lives Matter signs to protest his death by a police officer in Brooklyn Center, Minnesota on April 12, 2021.

The current developments come nearly a year after the death of another unarmed black man, George Floyd, after he was arrested outside a Minneapolis shop, where he was accused of using a counterfeit $20 bill.

A viral video had shown a white police officer, Derek Chauvin, kneeling on Floyd's neck for over eight minutes, despite the latter's pleas that he could not breathe. Floyd died in a local hospital the same day.
The trial of Derek Chauvin is currently ongoing.