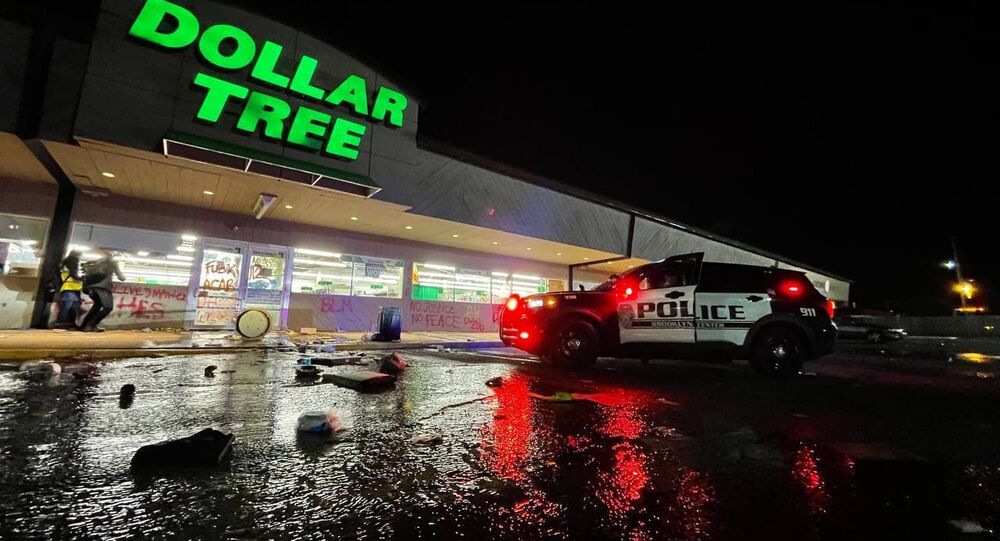 BROOKLYN CENTER (Sputnik) - Tracy, a young Black saleswoman in Brooklyn Center, Minnesota, borrowed a mobile phone from a passerby to call her manager and ask why the store where she works was closed and boarded up.

The reply left her in numb desperation.

On Sunday, marauding gangs ransacked the apparel outlet together with dozens of neighboring businesses in the commercial area of Brooklyn Center under the guise of protests against the police shooting of 20-year-old local Black resident Daunte Wright.

For Tracy, it may well mean losing a job that is her sole source of income.

"The manager said maybe [the store will open] in a month because we lost a lot of goods. Maybe more. It’s crazy," Tracy told Sputnik after the phone conversation.

Tracy explained this was her only job in an environment in which it is not quite easy to find employment.

"Now I may have to file for unemployment. And I just moved to Minnesota," she said.

Under a light April snow, the Shingle Creek Crossing shopping area in Brooklyn Center looks deserted with shards of glass still strewn on the pavement and plywood panels covering all windows.

An owner of another shop allows a quick look inside but refuses any comments as his assistants are working to fix the damage. Coat racks are in disarray with T-shirts and dresses littering a floor. Half-barricading the entrance is a shopping cart abandoned there by looters.

"Do you work here? Then you are not allowed in. We are closed and I don’t know when we are going to open," an elderly African American female guard greets a correspondent at the gates of a giant Walmart store - another victim of two nights of looting.

Mike, who is sweeping the pavement next to a footwear outlet, estimates that 90 percent of the store’s shoes were stolen. He said their store is also closed until further notice and the owner refuses to interact with the press.

On Monday, a Sputnik reporter saw a freshly robbed Dollar Tree store near a local police department, a focal point of protests. Sprinklers were showering gallons on water on overturned shelves, scattered goods, and broken windows while a strong tear gas odor permeates the premises secured by police.

Dramatic as they are, the latest scenes of devastation are a far cry from what Minneapolis, which borders Brooklyn Center, survived a year ago in protests against the in-custody death of another Black American, George Floyd, turned into riots. The suspected killer, former police officer Derek Chauvin, stands trial mere ten miles away from the robbed stores of Brooklyn Center and many residents are wary of more unrest in expectation of the verdict in the case.