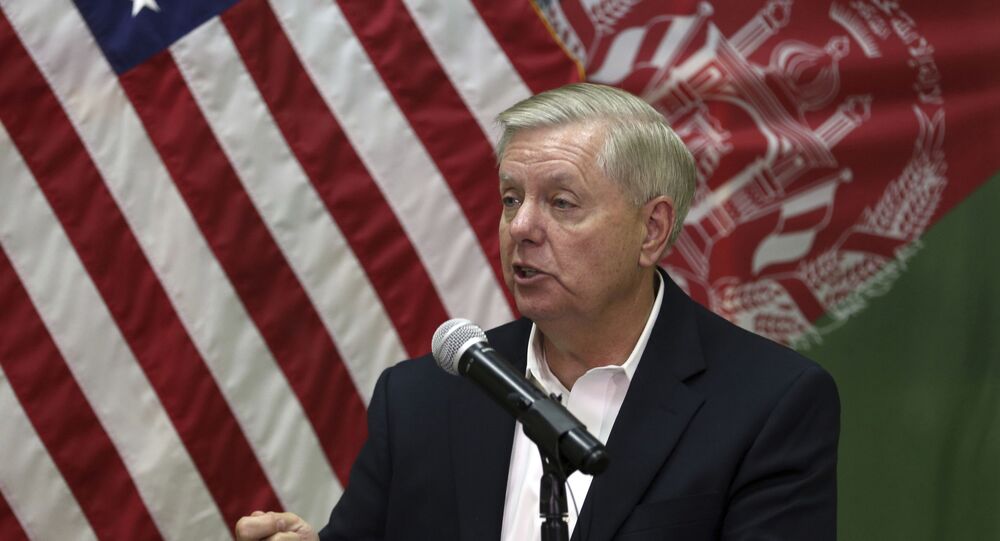 Several media outlets reported Tuesday that Biden will publicly announce a new deadline of September 11 for the complete withdrawal of US troops from Afghanistan, instead of Trump's planned date of May 1. The Taliban threatened to resume hostile actions if the May deadline is not met, but Biden warned that meeting that timeline would be "tough."

Republican Senator Lindsey Graham of South Carolina on Tuesday blasted President Biden's purported intentions to pull all troops out of Afghanistan, calling the decision "dumber than dirt" and "devilishly dangerous."

Biden is reportedly expected to declare on Wednesday that all troops will be withdrawn from Afghanistan by the 20th anniversary of the 9/11 terrorist attacks that caused the invasion.

Graham decried the purported decision by the administration, saying that it "canceled an insurance policy against another 9/11."

"A full withdrawal from Afghanistan is dumber than dirt and devilishly dangerous. President Biden will have, in essence, cancelled an insurance policy against another 9/11," Graham wrote in a statement.

If reports are accurate that President Biden is withdrawing all forces from Afghanistan by September of this year, it is a disaster in the making.

A full withdrawal from #Afghanistan is so irresponsible, it makes the Biden Administration policies at the border look sound. pic.twitter.com/TjtGV7dCTY

"A residual counterterrorism force would be an insurance policy against the rise of radical Islam in Afghanistan that could pave the way for another attack against our homeland or our allies," he continued.

© Flickr / US Embassy Kabul Afghanistan
Biden Reportedly Plans Complete Afghan Troop Withdrawal by Anniversary of 9/11
Graham added that he hoped the US military had advised against such a decision because he believes this will reignite the civil war in Afghanistan and reverse "all gains for Afghan women and children."

"Wars end when the threat is eliminated," Graham said, adding that the troops remaining in Afghanistan are "an insurance policy against another 9/11."

"I find it ironic that, given the sacrifices we've made to move Afghanistan forward, prevent another 9/11, and ensure the enduring defeat of al Qaeda* and ISIS*, that on the 20th anniversary of the attack we're paving the way for another attack," he said.

Moreover, Graham was quite vocal about the possible consequences of a full troop withdrawal when the announcement was made by the Trump administration, reportedly warning that it would be "disastrous", as "in one day, we lost 3,000 Americans because we took our eye off the ball in Afghanistan".

Last month, the Pentagon stated that it will not allow a “hasty or disorderly withdrawal” from the war-torn country, and it was reported that Biden was mulling keeping the troops until November.

Former President Trump started withdrawing troops despite being cautioned against it, leaving the US with about 2,500 troops still remaining in Afghanistan. Before the US completely withdraws, the Taliban is expected to keep certain promises while seeking a peace deal.

Experts and lawmakers in the US media have noted that abandoning Afghanistan without a peace agreement with the Taliban could result in civil war.

*Daesh (also known as ISIS/ISIL/IS), Al-Qaeda are terrorist organizations outlawed in Russia and many other states