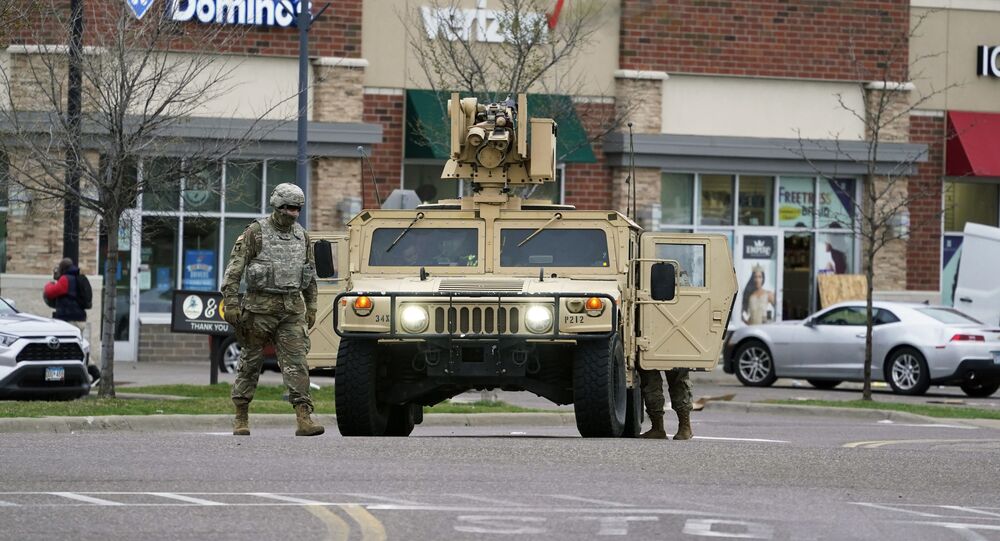 National Guard Deployed in Minneapolis Amid Riots, Looting in Wake of Cop Killing of Black Man

Daunte Wright, 20, was shot by police while attempting to escape custody after being pulled over for a traffic violation reportedly related to air fresheners and discovered to have an outstanding warrant. The incident took place in a sleepy suburb of Minneapolis, about 15 km from the spot where George Floyd died last year.

Minnesota Governor Tim Walz has signed off on the deployment of additional National Guard forces to Minneapolis in the wake of Sunday’s police shooting of Daunte Wright, which sparked clashes between police and protesters, riots and widespread looting in Brooklyn Centre, the community where the incident took place.

The Guard issued a pair of tweets Monday indicating that roughly 500 personnel had already been activated to help maintain order amid the Derek Chauvin trial, and that the deployment of more guardsmen had been expedited “in response to the events overnight in Brooklyn Centre.”

We are in the process of expediting those plans to bring additional Guardsmen on duty in response to the events overnight in Brooklyn Center. We will continue to assist in protecting lives and property and maintaining peace in Minnesota's community.

“We will continue to assist in protecting lives and property and maintaining peace in Minnesota’s community,” the Guard indicated.

Walz himself tweeted early Monday that he was “closely monitoring the situation in Brooklyn Centre,” and said he and his wife were “praying for Daunte Wright’s family as our state mourns another life of a Black man taken by law enforcement.”

I am closely monitoring the situation in Brooklyn Center. Gwen and I are praying for Daunte Wright’s family as our state mourns another life of a Black man taken by law enforcement.

© AP Photo / Christian Monterrosa
Video: Protesters Clash With Cops, Jump on Police Cars in Minnesota After Officer-Involved Shooting
Brooklyn Centre Police Department issued a statement Sunday indicating that a shooting incident had taken place after officers pulled over a vehicle over a traffic violation and determined that the driver, Daunte Wright, had an outstanding warrant. As officers attempted to take Wright into custody, he tried to get back into his vehicle and flee, at which point he was shot by an officer. After that, he drove for several blocks before crashing into another car. He was pronounced dead at the scene, with attempts by paramedics to revive him proving unsuccessful. His girlfriend, who was also in the vehicle, was hospitalised with non-life-threatening injuries. The passengers of the other vehicle were uninjured.

Wright had an outstanding warrant for fleeing from law enforcement and carrying a gun without a permit during an encounter with Minneapolis police in June 2020. His mother told reporters that her son was pulled over on Sunday over air fresheners hanging from his rear-view mirror.

The Minnesota Bureau of Criminal Apprehension has launched an investigation into the shooting.

Wright’s death prompted crowds of protesters to flock to the streets, with clashes breaking out between demonstrators and police at the crime scene as rioters tore through crime scene tape, jumped on top of police vehicles, smashed windshields and threw various objects including bricks. Police ordered protesters to disperse, and used tear gas.

The Minnesota National Guard launched “Operation Safety Net” in the Twin Cities area last month to assist local law enforcement and help maintain order as the Chauvin trial reaches the closing arguments phase. Guardsmen were deployed at the Hennepin County Courthouse where Chauvin is being tried, with about 100 troops on duty there in March. Guard units have also been spotted at the State Capitol complex in St. Paul.

The May 2020 death of George Floyd sparked the largest protests against brutality and racism by police since the civil rights era, but has also been accompanied by outbursts of violence and looting, including at least 19 deaths.

Chauvin, the officer accused of causing Floyd’s death by kneeling on his neck for 8 minutes and 46 seconds, is being charged with second-degree murder. He denied the charges, and his lawyers have argued that Floyd’s heart condition and past drug contributed to his death.