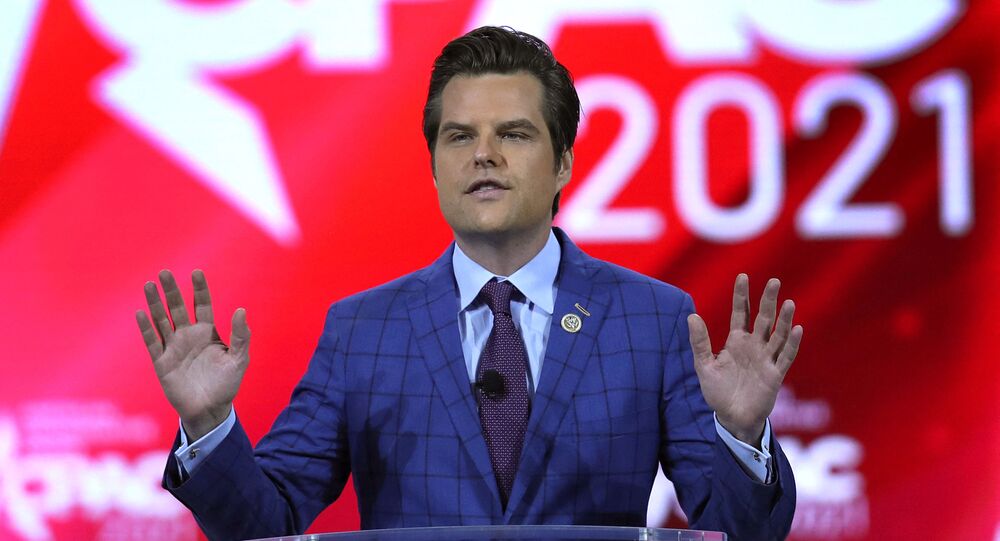 At the beginning of April the New York Times reported, citing three people familiar with the matter, that the Florida congressman is being investigated by the Justice Department for alleged sex trafficking of minor. Since then, several allegations have been made against the politician. Gaetz claims he's innocent and is a victim of extortion.

Matt Gaetz says he won't be intimated by the "lying media" as pressure piles on him following allegations of having sex with a minor. Speaking at the Women for America First event on 9 April, the 38-year-old lawmaker branded the claims against him "distortions of his personal life" and "wild conspiracy theories."

"I have not yet begun to fight for the country I love and for the nation I know benefits from America first principles! I won’t be extorted by a former DOJ official and the crooks he is working with. The truth will prevail," the congressman said.

During his speech, Gaetz claimed that not only has he received support from former President Donald Trump and fellow politicians, but also from "thousands" of ordinary Americans. “At restaurants, walking through public parks, sometimes just out on the street, in e-mails, online donations. And I can’t tell you how much it means to me.”

What Are the Allegations Against Gaetz?

At the beginning of April the New York Times reported, citing three people familiar with the matter, that Gaetz is being investigated by the Department of Justice (DOJ) for allegedly paying a 17-year-old girl to travel with him and have sex. The newspaper said that the investigation was launched during the final months of Donald Trump’s presidency. Later it wrote that Gaetz paid multiple women for sex citing check receipts it obtained as well as people close to the investigation.

Earlier this week the New York Times reported that Gaetz privately asked the-then president Trump to issue pardons for himself and several congressmen for any crimes they'd committed. The newspaper cited two individuals who were told of the discussion. Other media reports allege that Gaetz took drugs with women he had sex with and showed photos and videos of nude women to fellow congressmen.

The congressman denied any wrongdoing and said he's the subject, not the target, of the investigation.

"I have a suspicion that someone is trying to recategorise my generosity to ex-girlfriends as something more untoward. It is verifiably false that I have travelled with a 17-year-old woman," Gaetz said.

He claims his family is a victim of an extortion plot masterminded by a former DOJ official, and alleges that the criminals demanded $25 million from his family in exchange for making the sex trafficking case "go away."

Following media revelations, the US House Committee on Ethics announced it would investigat Gaetz's potential misconduct.