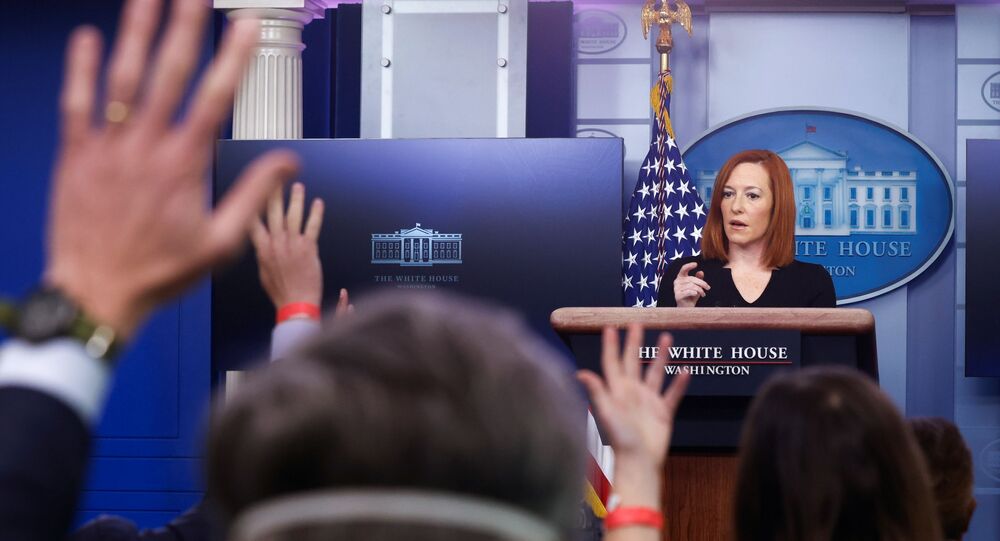 The individual set up several accounts on Twitter that were reportedly followed by some White House officials and correspondents, who also exchanged messages with the impostor. The social network has since suspended the accounts for violation of its impersonation policies.

What does one need to become a member of the White House press corps? Good education, hard work, quick mind? None of that. It seems one needs to be a good conman.

This, however, did not prevent the swindler from asking the White House press secretary several questions that touched on a variety of issues from – what ambassadors the Biden administration plans to appoint, to coronavirus travel bans, to the president's reaction to the news that Microsoft users were hacked, Politico reported, citing screenshots of the emails and conversations with journalists and White House officials.

How did Montagu fool everyone?

According to Politico, a quick guide on becoming a (fake) White House reporter looks like this:

Back in December, Montagu set up two accounts on Twitter - @WHschedule and @WHpoolreport – that shared posts from President Joe Biden, Vice President Kamala Harris, the first lady and the second gentleman. The accounts became quite popular and were followed by several White House correspondents and even officials, such as Michael LaRosa, press secretary for Jill Biden and Symone Sanders, a senior adviser for Kamala Harris, the outlet writes.

Step #2: Make them believe you're real

As the swindler's accounts gained more and more followers he or she asked the White House Correspondents Association on how to become a pool reporter and wrote to the Biden administration about the need to get a pass for a colleague, who would cover the press briefing in person.

Due to the coronavirus pandemic. the number of reporters attending White House press briefings has been limited and only 14 people are now present in the room. These people often ask questions sent by their colleagues from the press corps. Kacey Montagu took advantage of that. They emailed questions to White House reporters pretending to be their colleague and said that due to safety regulations it is impossible for him or her to attend the briefing.

Some reporters said when they conducted quick checks before deciding on whether to ask the question, they stumbled upon a LinkedIn profile for Montagu, which said that he or she work as "Chief Political Correspondent" at WHN in Washington, DC. The account has since been deactivated.

Here is one of the questions Kacey Montagu sent for a White House press briefing:

"Recently the White House has had read outs of calls and has the name of the people saying 'Senior Administration official' so why isn't the White House releasing the names of people in the calls, making these comments so that they can be held accountable to the American people?"

According to Politico, in some cases Kacey Montagu wrote back to White House reporters and thanked them for asking questions on their behalf.

The outlet writes that Montagu's con fell apart on 8 April after Chris Johnson, of The Washington Blade asked a question about Biden's relationship with Barack Obama and whether the administration would bring back presidential portrait unveiling. The question was sent by Montagu. Mediaite inquired about the origin of the question and it soon transpired that Kacey Montagu was not a member of the White House press corps.

Identity of the Swindler and His or Her Motivation

According to Politico, not much is known about the perpetrator, who refused to reveal personal information to the outlet.

People who spoke with the fake reporter assume he or she is a member of the gaming platform ROBLOX, where people call themselves "Legos". Within this platform there is a role playing group called nUSA, whose members pretend to be government officials. For example, meet (fake) British Prime Minister Sir William Heseltine...

Thank you to the former National Crime Agency Director General for his hard work and dedication to the agency. I’m pleased to see Lord Cavendish taking over as Director General and he has my full support

...​or President Speed of the United States.

The first step to building this nation back better is the selection and nomination of a Vice President. I am honored to announce and officially nominate Former President Alexander Jacob Goebel for the office of Vice President of the United States.

As for the reasons that prompted him or her to pretend to be a member of the White House press corps, the swindler told Politico they believe the work of White House reporters leaves much to be desired.

"I love journalism, and I think the press corps is doing a pretty bad job at the moment, so I decided I would ensure some transparency and ask some questions me and some friends wanted the answer to", Montagu said.