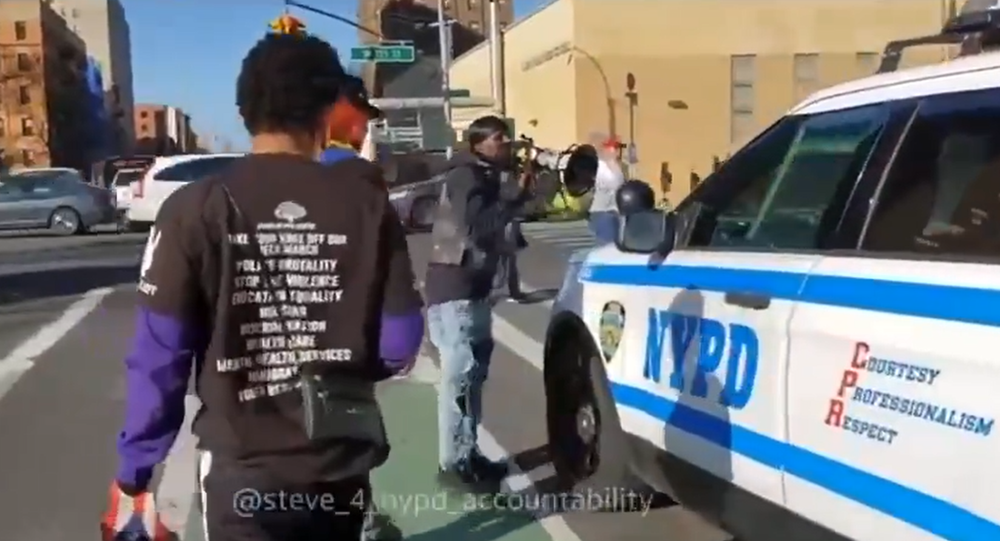 Earlier in March, New York City Mayor Bill de Blasio said that police officers showing up at people's doors as a preventive means, even when no crime was committed, could lower crime levels. His remarks triggered heated debate online.

The Policeman's Benevolent Association of the City of New York on Friday released a disturbing video in which several men appear to harass and insult police officers in a NYPD SUV as the latter drive by.

"Listen to the hate and harassment directed at these two @NYPD30Pct Neighborhood Coordination Officers. Why? No reason apart from the uniform", the PBA tweeted. "We know these haters don't speak for the community. But the politicians think they do. That's the problem. #WeNeedPolice."

In the video, a police SUV at West 155th Street and Amsterdam Avenue is seen surrounded by a group of men who spew obscenities like "b**ch*, "p**sy", "get the f**k out of here" and "dirty motherf**ker".

As the vehicle slowly moves forward, the men continue to harass the officers inside, with one of the group placing a toy pig on the car as someone yells: "That’s a pig. That’s a gift for you, b**ch."

Listen to the hate and harassment directed at these two @NYPD30Pct Neighborhood Coordination Officers. Why? No reason apart from the uniform.

We know these haters don't speak for the community. But the politicians think they do. That's the problem. #WeNeedPolice pic.twitter.com/31klNIo2I7

​The video caused bitter reactions from netizens who denounced those harassing the officers and suggested that police should never respond to calls from the harassers' addresses.

Let’s start with acquiring the address of these individuals. Then put it into a city wide data base so that the NYPD, the FDNY and the EMS crews never respond to those addresses. Those citizens can respond to their own emergencies.

Harassing a Police Officer on duty should be a serious offense.

Miss the police of my youth who would never tolerate such disrespect. So much I’d love to say and cannot.

​Not everyone, however, voiced support for the harassed officers.

The NYPD lost the trust of NYC’s citizens a long time ago.

Okay, so we're going to pretend this didn't just happen?

How about your members stop breaking the law and their oath and then we'll talk about the 'hatred' visited upon the dept.https://t.co/JiLBwAfihO

Tensions surrounding the actions of US police departments heightened last year after a black man, George Floyd, was killed in police custody by a white officer, Derek Chauvin, who kneeled on his neck for 8 minutes and 46 seconds, until Floyd was dead. The incident sparked a nationwide uproar and triggered large-scale protests against racism in police departments and police brutality.

Some of protests evolved into riots and some slogans against police brutality developed into anti-police rants, with calls to defund police departments and "abolish" the institution of policing.