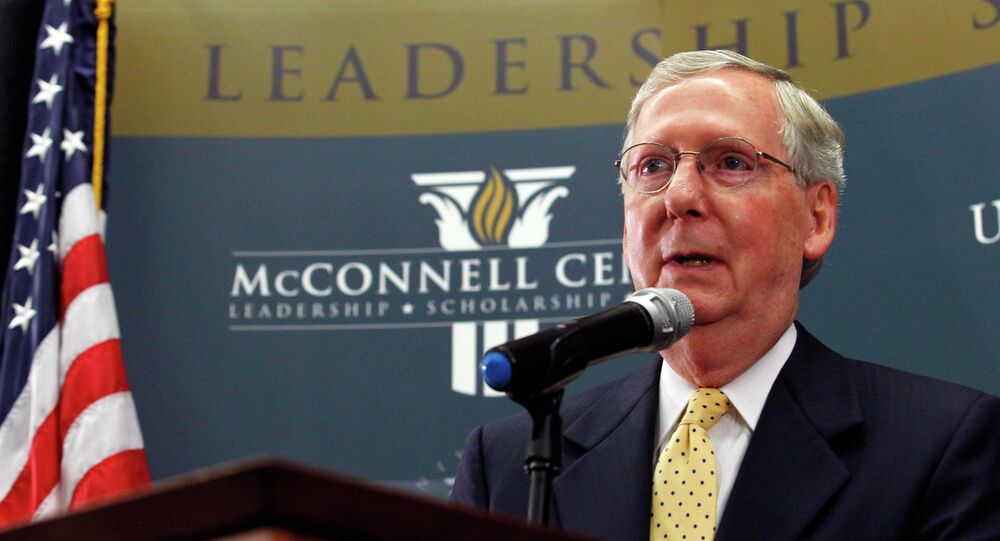 US Senate Minority Leader Mitch McConnell has since October 2020 been a vocal critic of any of US President Joe Biden's court reform plans, when he slammed the latter's policy to reform the court as an openness to court-packing - expanding the number of US Supreme Court justices.

Senate Minority Leader Mitch McConnell on Friday tweeted his discontent with US President Joe Biden's plan to study the necessity of expanding the US Supreme Court.

"This new court-packing commission is not some serious pivot away from Democrats’ political attacks on the Court", McConnell tweeted. "It’s just an attempt to clothe those attacks in fake legitimacy."

According to the GOP leader's tweets, Biden's initiative is an "example of the liberal preference for attacking norms and institutions, rather than working within them". Opposing the idea of increasing the number of the Supreme Court justices, what he describes as 'court-packing', McConnell recalled the words of the late justice Ruth Bader Ginsburg.

"Constitutional scholars and the justices themselves have repeatedly affirmed the position of the late justice Ruth Bader Ginsburg: 'nine seems to be a good number'", he mused.

This new court-packing commission is not some serious pivot away from Democrats’ political attacks on the Court. It’s just an attempt to clothe those attacks in fake legitimacy.

​McConnell's statement comes in response to Biden describing the American judiciary system as "out of whack" and ordering the assembly of a special commission to prepare a report within the next six months to determine whether reforms, such as changing the "length of service and turnover" of justices, are necessary.

Currently, the Supreme Court is dominated by Republican appointees, with GOP members voicing concern that Democrats might attempt to "pack the court" so that this dominance is erased.

McConnell is among the early critics of Biden's court reform plans. Back in October 2020, the GOP leader said that the practice of court-packing “ought to be completely unacceptable”. His remarks came after Biden, during his presidential campaign, announced plans to form a commission that would decide whether to reform the court.