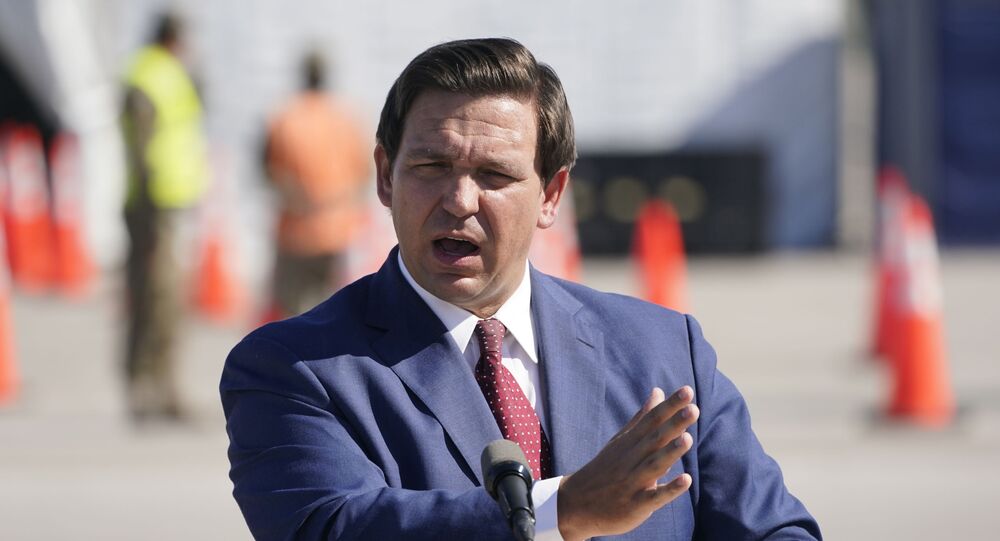 Since the early start of the COVID-19 pandemic, Florida Governor Ron DeSantis has faced ongoing criticism about his handling of the pandemic in his state. DeSantis has often fired back criticizing the way in which the US government has handled controlling the spread of the virus.

In Tallahassee, Florida, last month, DeSantis held a public health roundtable where he invited a panel of scientists and researchers to weigh in on issues surrounding the COVID-19 pandemic. However, YouTube pulled the video on Wednesday for supposedly violating the social media platform’s standards on misinformation.

In the video, the scientists rejected the steps taken by the US to try and control the virus, which included a discussion on the effectiveness of lockdowns and masks, contact tracing, the closing of schools and vaccine passports.

“YouTube has clear policies around COVID-19 medical misinformation to support the health and safety of our users.” YouTube spokesperson Elena Hernandez said in a statement. “We removed AIER’s [American Institute for Economic Research] video because it included content that contradicts the consensus of local and global health authorities regarding the efficacy of masks to prevent the spread of COVID-19.”

DeSantis’ press secretary, Cody McCloud, on Thursday called the move “another blatant example of Big Tech attempting to silence those who disagree with their woke corporate agenda.” According to NBC News, McCloud emphasized in his statement that public health policies need to include a variety of scientific and technical expertise and removal of the video represented a suppression of “productive dialogue of these complex issues.”

The video, which is still available on the AIER website, involved scientists, majority of whom are responsible for the Great Barrington Declaration, a statement sponsored by AIER which opposes lockdowns and argues that society would build immunity if all but those over 70 “resume life as normal.”

Many other leading scientists have denounced the Great Barrington Declaration as a “dangerous fallacy” unsupported by scientific evidence, and have accused those involved of “spreading public health misinformation.”

However, according to Dr. Scott Atlas, a former Trump White House coronavirus advisor who participated in the discussion, “there’s no scientific rationale or logic to have children wear masks in school.” Attending the meeting as well, Dr. Jay Bhattacharya of Stanford University, agreed, saying that wearing a mask is “developmentally inappropriate and it just doesn’t help on the disease spread.”

There are studies still being done to understand how mask mandates may affect people, especially children. Dr. Brett Enneking, a child psychologist at Riley’s Children’s Health, mentioned in an interview last July that while it is unsure what the effect a mask mandate has on children, we do know that “especially in early childhood” they use the entire face, including the mouth to get a “sense of what’s going on around them in terms of adults and other people in their environment as far as their emotions.” He goes on to say that many psychologists wonder when wearing masks “if it would affect child development.”

However, those outraged over these claims appearing during the roundtable discussion argue that it goes against the recommendations of the US Centers for Disease Control and Prevention (CDC), which has advised that children “age 2 and older should wear masks in public settings and when around people who don’t live in their household.”

The Florida governor is among those who do not agree with many of the actions taken by the CDC during the pandemic. At a news conference on Thursday, DeSantis announced that he was filing a lawsuit against the federal government and the CDC to allow cruise ships to resume sailing after being shut down for over a year because of the COVID-19 pandemic.

The fact of the matter is there is a considerable lack of agreeability and compromise between political, scientific and federal officials when it comes to deciding what the best method is for tackling COVID-19, both nationally and globally, with fact-checking seeming to be the only option to disagree.

Big Tech has already faced a lot of backlash over the issues of the spread of misinformation and disinformation on their platforms, with many CEOs being subjected to a line of questioning from lawmakers of Congress last month. This move by YouTube is only sure to once again bring into question the amount of power and control these companies are allowed to have over speech.

Who are the scientists involved in DeSantis’ Roundtable Panel?

Dr. Scott Atlas, radiologist, political commentator, health care public advisor and former adviser on the Donald Trump administration’s White House Coronavirus Task Force. Known for his “herd immunity” theory and the belief that children do not transmit the COVID-19 virus, Atlas posted a letter in November 2020 announcing his resignation from his position at the White House. In his letter, he claimed that his “advice was always focused on minimizing all the harms from both the pandemic and the structural policies themselves, especially to the working class and the poor.”

Professor Sunetra Gupta, British-Indian infectious disease epidemiologist and professor of theoretical epidemiology at the Department of Zoology, University of Oxford is one of the primary authors of The Great Barrington Declaration. She is a large critic of the lockdown approach believing that “we in the UK cannot afford lockdowns, nor indeed as indeed is the case most of the world.”

Dr. Jay Bhattacharya, professor of medicine at Stanford University and research associate at the National Bureau of Economic Research with a focus on the epidemiology of COVID-19, co-authored the Great Barrington Declaration. His hope is that the declaration prompts a dialogue about the benefits and harms of public health interventions. He met with former President Trump’s health officials back in May 2020 to discuss the lockdown policy and propose a “focused protection” of people. He has written a paper on “The Futility of Contract Tracing,” calling the policy punitive.

Dr. Martin Kulldorff, professor of medicine at Harvard Medical School, biostatistician and epidemiologist at the Brigham and Women’s Hospital who also co-authored the Great Barrington Declaration, has referred to the public health damage from the lockdown as the “biggest public health mistake or the biggest public health fiasco in history, unfortunately.”