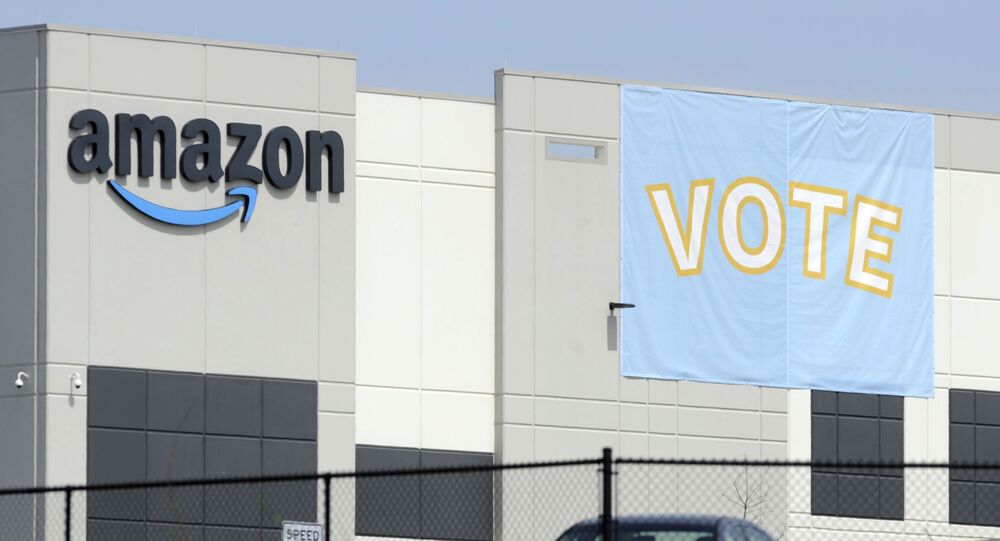 Amazon has once again dodged an attempt by its workers to unionize, but the widespread scrutiny of its methods will likely ensure the vote is recast, labor experts have said.

After weeks of mail-in voting, workers at Amazon’s distribution facility in Bessemer, Alabama, have voted not to join a labor union. However, union leaders are now preparing to sue the company, claiming its many interfering actions went against US labor laws and demanding the vote be voided.

The Retail, Wholesale and Department Store Union (RWDSU) announced on Friday that it will be charges of unfit labor practices with the US National Labor Relations Board (NLRB), a federal agency that enforces labor laws. During a live counting of ballots at the NLRB’s office in Birmingham, Alabama, a majority of the votes cast at Amazon’s Bessemer facility were against being represented by the RWDSU.

However, RWDSU is pushing back, claiming Amazon broke the law by interfering with the workers’ decision-making process.

“We won’t rest until workers’ voices are heard fairly under the law--and when they are, we believe they will be victorious,” RWDSU President Stuart Applebaum said in a Friday statement. “We won’t let Amazon’s lies, deception and illegal activities go unchallenged.”

“Amazon knew full well that unless they did everything they possibly could, even illegal activity, their workers would have continued supporting the union,” Applebaum said. “We demand a comprehensive investigation over Amazon's behavior in corrupting this election. Working people deserve better than the way Amazon has conducted itself during this campaign.”

Amazon’s efforts to block a union victory included an extensive propaganda campaign, including anti-union indoctrination meetings workers were forced to attend and bombarding workers with calls and text messages about the purported dangers of joining a union, as well as moves such as getting the city government to change the timers on the stoplights outside the facility to give union organizers less time to distribute information.

It also includes, as Sputnik reported, suddenly dropping Amazon’s lowest-level employees, the ones most likely to support a union vote, from the company’s internal social network. Then, they are forced to use one in which communicating with anyone except one’s direct superiors is extremely difficult.

Other documents obtained by the Intercept revealed that Amazon had also hired high-octane union-busting consultants who collected a larger salary in a single day than the average Bessemer facility employee was paid in a whole month.

Labor lawyer Dan Kovalik told Sputnik that alone could be grounds for throwing out the union’s losing vote. At a press conference Friday, Applebaum similarly said that a rerun election is “very likely,” but couldn’t give a specific timeframe.

© AP Photo / Jay Reeves
FILE - In this Tuesday, Feb. 9, 2021, file photo, Michael Foster of the Retail, Wholesale and Department Store Union holds a sign outside an Amazon facility where labor is trying to organize workers in Bessemer, Ala.

“Big Mike” Foster, the union drive’s lead organizer, congratulated the Bessemer workers on their accomplishment despite the defeat and he pledged to continue organizing.

“I need you to hear this, Jeff Bezos... just because you won this battle, this war is not over,” Foster told reporters at the presser.

Amazon has denied any misconduct, saying in a blog post Friday that the company is actually a force for good in the community for bringing $15 an hour wages.

“It’s easy to predict the union will say that Amazon won this election because we intimidated employees, but that’s not true,” the company said. “We’re not perfect, but we’re proud of our team and what we offer, and will keep working to get better every day.”

Amazon’s stock was up by more than 2% Friday afternoon on the heels of the news.

The union was declared late last year, just months after Amazon opened the Bessemer facility amid explosive company growth caused by the COVID-19 pandemic. Amazon added more than 500,000 jobs last year, as shuttered shops shifted shopping from in-person to online due. However, amid the boom, Amazon’s labor practices, already controversial for causing everything from requiring delivery workers to pee in bottles instead of stopping for bathroom breaks in order to meet their schedules, to driving workers to commit suicide while on the job, got even worse and drew the accordingly greater scrutiny. As COVID-19 cases spiked in Amazon facilities, rumblings of a new attempt at forming a union grew as well.

Workers pointed not only to these safety violations and miserable work environments, but also to the astounding wealth collected by Bezos, whose personal wealth increased by $48 billion in 2020 as the company’s profits spiked by 84%.

The majority-Black town of Bessemer was once a bustling industrial city making steel and railcars and sporting a powerful union movement, but by the 1980s, most of its industries had left and the city fell on hard times. However, its support for an organized workforce is strong, as an investigation by Liberation News showed widespread support among the city’s population for the Bessemer workers.

“I am glad that Amazon workers are trying to get a union,” one Bessemer resident told the outlet. “But there are plenty more changes we need to make. Everything goes up: food, daycare, school, but workers’ [pay] is not brought up to where they can survive. [The bosses] want us where we are at. It don’t make no sense.”

Due to the COVID-19 pandemic, voting took place by mail-in ballot from February 8 to March 29. On Wednesday, the labor outlet More Perfect Union reported on emails obtained by a Freedom of Information Act request revealing that Amazon put extensive pressure on the US Postal Service ahead of the start of the union vote to place an illegal ballot dropbox.

The mailbox was critical for Amazon’s strategy because it wanted to pressure employees to bring ballots to work that they'd received at home in the mail.

By doing this, they could then pressure and monitor employees to submit “no” votes.https://t.co/IIOtPlf3ZU

​“Amazon had the ballot dropbox installed in violation of explicit guidance from the federal government. The box is installed the evening of Feb 9th, late at night, under cover of darkness,” MPU wrote, noting both the USPS and NLRB advised against the move.

“The mailbox was critical for Amazon’s strategy because it wanted to pressure employees to bring ballots to work that they'd received at home in the mail. By doing this, they could then pressure and monitor employees to submit ‘no’ votes.”

The emails, they noted, “directly contradict” what USPS has said about the mailbox for months, which is that placing the mailbox there was their idea. Amazon is USPS’ largest corporate client.