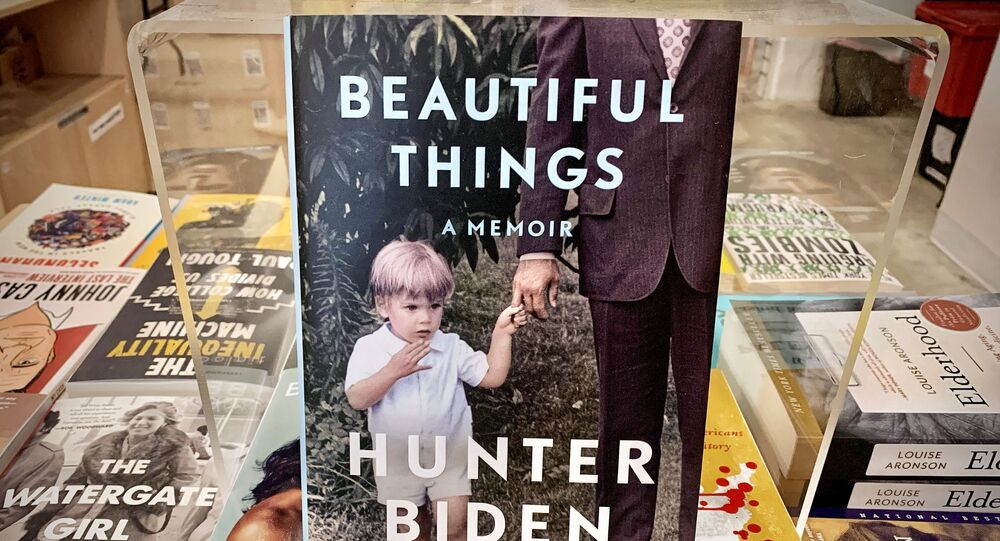 The son of US President Joe Biden, Hunter, shared details of his addictions, family matters and business deals in a tell-all book titled "Beautiful Things" that came out on 6 April.

According to the report, forensic experts from Maryman & Associates said that the laptop, containing a "bombshell cache of 103,000 text messages, 154,000 emails, more than 2,000 photos and dozens of videos", was Hunter's, and that the data it contained "appear to be authentic".

"The data on the system before April 2019 appears to be related to Mr. Biden, with timestamps appearing to be between 2016 and 2019," the Maryman & Associates report for The Daily Mail said, cited by the outlet. "The operating system timestamps appear to be authentic, and no evidence was found to suggest that the timestamps or data were altered or manufactured. No indications were found that would indicate the data was manufactured."

The Daily Mail offered a look at what it claims are the contents of Hunter Biden's laptop that tell stories not included in his memoir.

Hunter 'Begged' His Father to Run for President

According to the report, citing screenshots from texts alleged to be between father and son, the latter begged his father to take part in the White House race for the sake of his son's reputation in 2019.

"if you dont run ill never have a chance of redemption", Hunter is alleged to have texted his father, receiving a reply: "I'll run but I need you [...] Only focus is recovery."

The report refers to several other screenshots of dialogue between father and son, where Biden Jr lashed out at his father for "having made clear to the world that the only reason for not [running for president is your] family problems im glad to be the f***ing bullseye you painted on my back". In another screenshot, Joe allegedly offers to pay Hunter's bills when he ran out of money and repeatedly tells him he loves him.

One of the photos from the laptop reveals Hunter's so-called "meth mouth" as he sits in a dentist's chair.

Joe Biden Was Afraid of Being Hacked

According to screenshots provided by The Daily Mail, after one of Hunter's rants in 2018 Joe warned him to be cautious about what he texted.

"Be careful what you text. Likely I'm being hacked", the future president said.

The Daily Mail repeated that Hunter allegedly filmed multiple sex tapes, with his laptop full of "hundreds of pictures of naked women and naked selfies of Hunter, as well as dozens of videos", echoing October 2020 reports on leaked explicit footage from the laptop alleged to be Hunter's.

Other contents reportedly show how he ordered drugs to hotel rooms to take with women with whom he had sex.

Among others, he allegedly hooked up with a woman named Diana Pagano, who helped him "transport other women in Ubers to his hotel room in New Haven, Connecticut", and then offered him drugs. Later in November 2019 she was charged with violating her probation by allegedly running a drug ring out of her home in East Haven. Six of her customers were also arrested in a police raid, making it luck that Hunter escaped "a tangle with law enforcement".

Later in March of that year, Hunter again dodged problems with the law, when, according to his texts, police showed up at a motel in Connecticut where he was taking drugs and hooking up with prostitutes.

"Come on H this is linked to Celtic's account", the agent wrote, reportedly referencing 'a code name for a senior politician under protection'. "DC is calling me every 10. Let me up or come down. I can't help if you don't let me H."

At the time, the Bidens were not entitled to be protected by federal agents, as Joe Biden had ended his vice-presidential tenure in January 2017 and did not officially regain a detail until 2020.

The Daily Mail, citing Hunter's hotel bills, said he had racked up a $5,195 bill for a week when he stayed in a third-floor suite in May 2018, where he ordered room service and sought refills for prescriptions for drugs like Viagra, Lexapro - an antidepressant - and Clonazepam.

"Emails from May 24 show Hunter added a prostitute as a wire transfer recipient on his bank account and wired out $25,000", the report continued.

The outlet claimed that it had obtained a copy of Hunter's hard drive from a former Steve Bannon podcast co-host named Jack Maxey.

Reports claimed earlier that the owner of the computer store where Hunter had purportedly left his laptop gave a copy of the hard drive to Rudy Giuliani, a former personal attorney of the previous US president, Donald Trump, in September 2020.

The so-called 'laptop from hell' scandal sparked shortly before the presidential election month, with Trump declaring that the contents of the alleged Hunter laptop had proved that the son of the future US president had facilitated business meetings for Joe Biden and executives from the Ukrainian company Burisma and that the son was engaged in murky dealings with China.

The Bidens denied the allegations at the time, and continue to do so.

When asked during an interview to CBS earlier in the week about whether the purported laptop belonged to him, Hunter refused to answer directly but said it could "absolutely" be his computer.

© AFP 2021 / -
(FILES) In this file photo video grab made on August 20, 2020 from the online broadcast of the Democratic National Convention, being held virtually amid the novel coronavirus pandemic, shows former vice-president and Democratic presidential nominee Joe Biden's son Hunter Biden speaking during the last day of the convention.

What Hunter Biden has disclosed in his memoir is a story of family tragedy, controversial business relations with Burisma and how he struggled to tackle his addictions.

In the tome, Hunter suggested that a re-election of Trump could have been "a threat" to his "personal freedom".

On pages of his memoir, the president's son said that his struggles, and particularly the death of his brother Beau in 2015, plunged him into what he described as a "pandemic of addiction".

“Once you decide that you’re the bad person everyone thinks you’ve become, it’s hard to find the good guy you once were,” Biden writes. “Eventually, I quit looking for him: I decided I wasn’t the person everybody who loved me thought I was anymore.”

The book hit the book shelves on Wednesday.