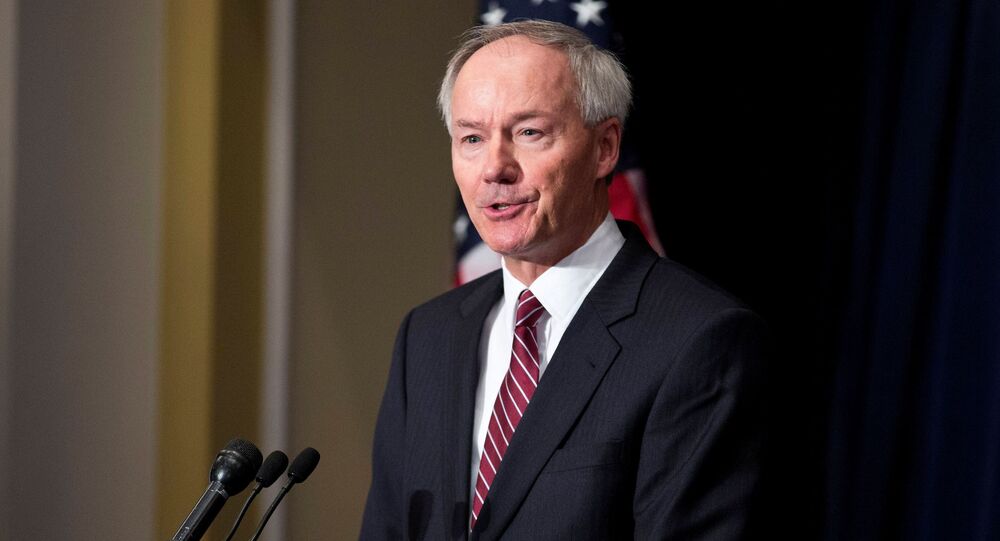 Hormone-blocking drugs that are normally prescribed to preteen children suffering from a rare disorder of precocious puberty, have in recent years been increasingly used to stop the development of secondary sexual characteristics in teenagers who identify as members of the opposite sex.

A former US president, Donald Trump, criticised the Arkansas state governor for blocking a bill that sought to outlaw controversial hormone treatments for children with gender identity issues.

The Trump facility issued a statement on Thursday, two days after both houses of the Arkansas state legislature voted to override Governor Asa Hutchinson's veto of the Save Adolescents From Experimentation (SAFE) Act.

The former president dubbed Hutchinson a 'Republican In Name Only' (RINO) — and threw in an endorsement for his former White House press secretary, Sarah Huckabee-Sanders, and her November 2022 challenge for the GOP nomination for governor of state.

"Asa Hutchinson, the lightweight RINO Governor of Arkansas, just vetoed a Bill that banned the CHEMICAL CASTRATION OF CHILDREN," Trump wrote in his office's press release. "'Bye-bye Asa,' that’s the end of him! Fortunately for the Great State of Arkansas, Sarah Huckabee Sanders will do a fantastic job as your next Governor!"

The bill bans gender reassignment surgery and the prescription of hormone treatments, including puberty blockers, to anyone under 18. Hutchinson said paediatricians, social workers and the parents of transgender youth lobbied him to use his veto for the sake of a minority widely known to be prone to mental illness and suicide.

"My own personal view that this is too extreme, it was too broad and did not grandfather in those young people who are currently under hormone treatment," Hutchinson told NPR. "This puts a very vulnerable population in a more difficult position."

Republican state Representative Robin Lundstrum, one of the bill's sponsors, said the hotly-debated legislation "protects minors from being preyed upon and pressured into making adult decisions before they are ready."

"Those who claim otherwise are not being honest, and either haven't read the bill or are placing fundraising above the best interest of children," Lundstrum suggested.

© REUTERS / Caroline Brehman
Senate Confirms Rachel Levine as Asst. Health Secretary, First Trans Person Picked for Federal Spot
Puberty blockers are commonly used in the treatment of precocious puberty, a disorder affecting up to one in 5,000 children under the age of nine — with some 90 percent of cases seen in female children.

In recent years the drug compounds have been used in to halt the development of secondary sexual characteristics, such as breasts or male-pattern body hair, in teenagers diagnosed with gender dysphoria, a controversial clinical diagnosis given to transgender people.

Last year, the British High Court ruled against that use of the drugs by the Tavistock Clinic in northwest London, stating that it was "not known whether hormone blockers affect the development of the teenage brain or children’s bones." Children undergo significant physical and mental development during puberty, in addition to becoming sexually mature.