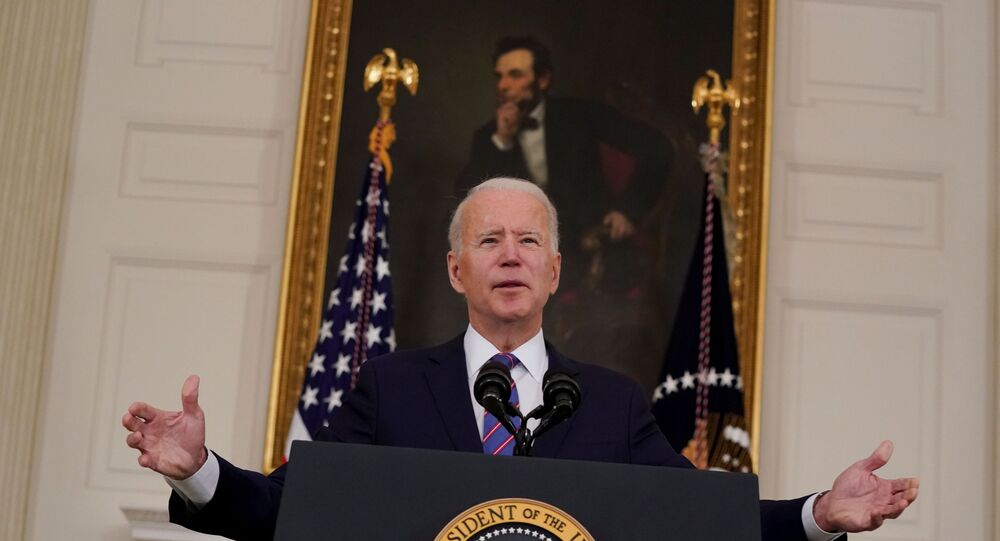 The US president updated reporters on the vaccination status in the country and warned about new types of the novel coronavirus spreading.

US president Joe Biden says he has not discussed the origins of the COVID-19 infection with his Chinese counterpart Xi Jinping.

In a response to a question by Fox News asking if the US president had asking Xi if Beijing “misled the world at the beginning” of the coronavirus pandemic, Biden said he did not.

“No, I have not had that conversation with President Xi. Thank you,” Biden said and left the room.

The White House stated previously that Biden and Xi held phone talks on 10 February, saying that the leaders raised the issue of the ongoing pandemic, human rights, trade, and Indo-Pacific security.

© REUTERS / ERIN SCOTT
'Which I'm Not Doing': Biden Recalling COVID-19 Rules While Getting Too Close to Person - Video

The conversation, marking the first interaction between the two leaders, was also the first time the heads of the two countries have been in direct contact since the Chinese president spoke to Donald Trump in March 2020.

The White House, however, did not specify the details of the conversation.

In December, the New York Times and ProPublica released an investigative report saying that the initial reaction of the Chinese government toward the outbreak of the COVID-19 was to contain the spread of information. Biden’s predecessor Trump repeatedly accused China of covering up the outbreak of the virus and failing to warn the world about it. Beijing has repeatedly denied these allegations.

Washington and Beijing have also been trading accusations about the origins of COVID-19 for nearly a year now. Trump claimed that the virus may have escaped from the Wuhan Institute of Virology bio lab, while Beijing at one point suggested the US Army may have spread the virus in the city during the 2019 Military World Games.

Last year, WHO released a statement saying that all available evidence suggests SARS-CoV-2 is of animal origin and not man-made.

Since the outbreak in March 2020, COVID-19 has massively impacted the United States, with almost 31 million Americans infected, more than any other country. Over 550,000 Americans have died from the pandemic, according to John’s Hopkins University.