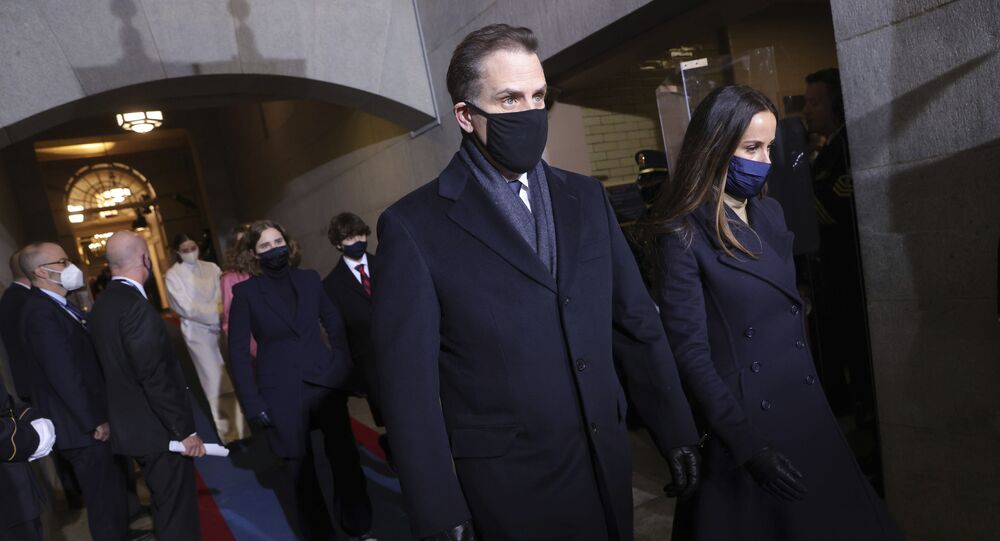 Joe Biden’s son Hunter, who has just detailed his history of addictions and past business deals in a new book, is facing a federal criminal investigation into his foreign ventures, including ones in China.

Hunter Biden believes that former US President Donald Trump could have impeded his freedom if he'd been re-elected in 2020, according to the president’s son's just-released memoire “Beautiful Things”.

Trump’s victory “seemed a threat to my personal freedom. If Dad hadn’t won, I’m certain Trump would have continued to pursue me in the criminal fashion he’s adopted”, Hunter suggests.

The president’s son, who announced in December 2020 that his tax affairs were under criminal investigation over his overseas business deals, claims in the book that he had not done anything wrong when landing a lucrative board-member job at Ukraine’s Burisma, while his father was serving as the vice president.

Joe Biden was also a key person overseeing US-Ukraine relations in the Obama administration at the time of Hunter’s Burisma appointment – something that drew much ire among GOP members and ex-president Trump.

In the infamous 25 July phone call with Ukrainian President Volodymyr Zelensky, Trump urged his Ukrainian counterpart to investigate the Bidens, which cost him the first impeachment trial over allegations that he had threatened to withhold military help to Ukraine otherwise.

Hunter, who calls Trump “a vile man with a vile mission” in his book, believes that he did “nothing unethical” when taking the job, and says he has "never been charged with wrongdoing”.

“In our current political environment, I don't believe it would make any difference if I took that seat or not. I'd be attacked anyway. What I do believe, in this current climate, is that it wouldn't matter what I did or didn't do. The attacks weren't intended for me. They were meant to wound my dad,” Hunter claims.

He recently told the BBC that his father’s name has "opened doors that wouldn't be opened up to other people".

No ‘Mistake’, No ‘Recollection’

In a recent interview to CBS ahead of his book’s release, Hunter Biden said that he doesn’t think that he “made a mistake” when taking the Burisma spot.

He also told CBS News’ Tracy Smith that he was “100 percent certain” that the federal probe into his finances, reportedly launched by the US Attorney's Office in Delaware as early as 2018, would clear him of any potential charges.

It was during the interview that Hunter said that he just doesn’t remember taking the legendary “laptop from Hell” – the device that contained documents suggesting that Joe Biden played a role in his son’s business deals in Ukraine and China - to a Delaware repair shop, despite existing receipts with a signature very much resembling his.

The New York Post was the first media outlet to break the story about the infamous device, saying that it had been abandoned by Hunter Biden in the repair shop in April 2019, with its owner handing over the hard drive to the FBI and a copy to Donald Trump’s attorney Rudy Giuliani, who then contacted journalists with the explosive docs.

Hunter Biden agrees, the laptop could have “certainly” belonged to him – but he has some other theories why some of his private docs and photos could have ended up in the media.

According to Biden’s new book, his long history of drug and alcohol abuse left him with a lot of occasional blackouts, especially when it came down to recalling some important stuff, like fathering a daughter with Arkansas stripper Lunden Roberts.

But at least he remembers where all the money went from his Burisma bid: Hunter says he spent them on alcohol and drugs.