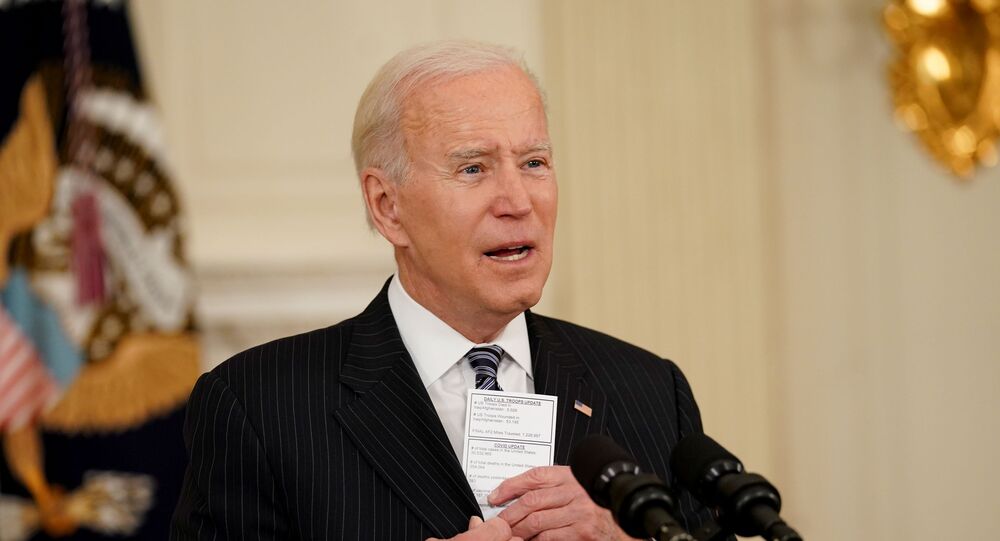 Biden: New Coronavirus Variants Spread in US, Number of Cases Up

WASHINGTON (Sputnik) - US President Joe Biden on Tuesday warned that new types of the novel coronavirus are spreading across the United States and that the number of people testing positive is again increasing.

“New variants of the virus are spreading and moving quickly. Cases are going back up, hospitalizations are no longer declining. While deaths are still down, way down from January, they are going up in some places,” Biden said in a televised address.

The US president praised the scale of the nationwide coronavirus vaccination effort during which some 62 million people have been fully inculcated, but admitted the that outreach is still not enough.

“The vaccination program is saving tens of thousands of lives but the pandemic remains dangerous. Let me explain it in a single word. Time. Time. Even moving at the record speed... we are not even half way through vaccinating over 300 million Americans. This is going to take time,” Biden said.

Biden announced that every adult American will be eligible for a vaccine beginning April 19, instead of the initial May 1 deadline.

Biden also told reporters that he has not spoken to Chinese counterpart Xi Jinping about Beijing's alleged responsibility for the global spread of novel coronavirus.

“No, I haven’t had that conversation with President Xi,” Biden replied to the question of whether he had had a chance to ask his counterpart if reports that China may have misled the world at the beginning of the pandemic are true.

Biden’s predecessor, Donald Trump, repeatedly accused China of covering up the coronavirus outbreak and failing the warn the world about the danger of a pandemic.

A number of Americans have said they do not want to be vaccinated because vaccine producers skipped testing phases and are exempt from legal liability as well as allegations that the shots are effectively gene therapies with a large number of potential side effects, including death.

Since its global outbreak in March 2020, COVID-19 has impacted the United States more than any other country, with nearly 31 million Americans infected by the virus and over 550,000 dead from complications caused by it.