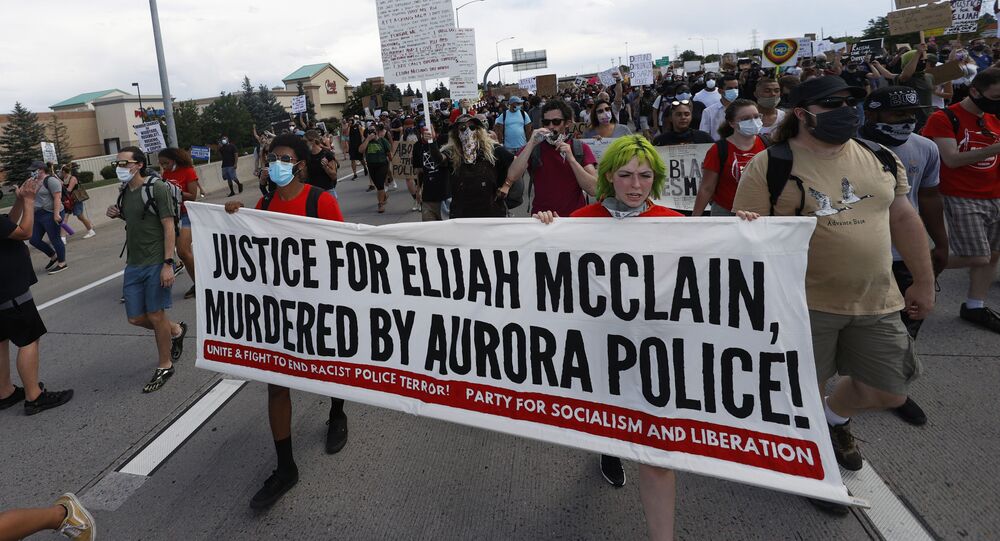 Three Aurora, Colorado, deputies have faced intense public scrutiny following the 2019 death of a young, unarmed black man in their custody, but so far the only charges filed by the district attorney have been against the activists who’ve led a mass movement demanding justice for the slain man, 23-year-old Elijah McClain.

On Sunday, the Arapahoe County District Attorney’s Office moved to dismiss a slew of charges against three anti-racist activists - Terrance Roberts, Joel Northam, and Lillian House - including all 16 felony charges against them and several msidemeanors, according to the National Committee for Justice in Denver (NCJD) solidarity group.

According to a Monday bulletin by the committee, the misdemeanors in Arapahoe County could still land House and Northam in jail for four years and Roberts for one year. However, they still face a number of felony and misdemeanor charges in neighboring Adams County alongside another organizer, Eliza Lucero, that could carry prison terms of as high as 13.5 years.

“The dismissal of a large number of charges, including all felonies in Arapahoe County, is a significant step in the right direction, showing an acknowledgement from District Attorney John Kellner’s office that this case is unjustified,” NCJD said. “The extremely serious charging of these peaceful protest leaders is widely understood as a political prosecution aimed at silencing the movement for justice for Elijah McClain.”

“We continue to call on both prosecuting District Attorneys John Kellner and Brian Mason to drop ALL charges against the leaders of the peaceful protests for justice for Elijah McClain. While the charges were filed by their predecessors George Brauchler and Dave Young, any continuation of the criminal prosecution perpetuates this miscarriage of justice,” the committee added.

As Sputnik reported, late last month an Adams County judge threw out the steepest charges against House, Northam and Lucero - that of first-degree kidnapping - after a pretrial hearing failed to establish probable cause.

In a series of "violent and sudden" arrests spearheaded by a SWAT team, Colorado police arrested a total of six protesters in September 2020 in connection with protests over the summer that formed part of the nationwide protests against police brutality and anti-black racism. In particular, one July 3 demonstration saw several hundred protesters surround an Aurora police precinct for several hours; prosecutors attempted to argue the protest amounted to kidnapping of the 18 officers inside. At the hearing, lawyers for the activists successfully argued the police had sequestered themselves in the station without attempting to leave or to disperse the crowd, which eventually left when ordered to do so.

The protest was just the latest in a growing movement demanding justice for McClain, who died in police custody on August 30, 2019. While he was walking home from a convenience store, a local resident reported McClain to the police, who confronted him and tackled him to the ground, pinning him until he lost consciousness. Friends and relatives have said McClain was a docile and non-confrontational person. After the officers told medics that McClain had been violent and was “definitely on something,” they reportedly administered an oversized dose of ketamine sedative, causing him to suffer cardiac arrest and become brain-dead. McClain died in the hospital three days later.

​No charges have been filed against the three officers who confronted McClain - Nathan Woodyard, Jason Rosenblatt and Randy Roedema - and a police investigation subsequently exonerated them. However, an independent review by the City of Aurora published in February found serious faults with the police probe, noting that “Aurora police and paramedics made substantial errors at nearly every stage of their interaction with Elijah McClain and the detectives tasked with investigating the incident that led to the 23-year-old’s death stretched the truth to exonerate the officers involved."

Protests organized and supported by the Party for Socialism and Liberation, a revolutionary Marxist party of which House, Lucero and Northam are members, have helped put an international spotlight on the McClain case, the Aurora Police Department, and the community’s demands for justice for McClain. A series of huge protests over the summer of 2020 saw demonstrators shut down highways and lead the city’s largest protest marches ever. Despite the arrest of several lead activists, who were held for more than a week in a COVID-invested jail despite a two-day maximum wait time for a bond hearing, the protests continued and only grew in strength.