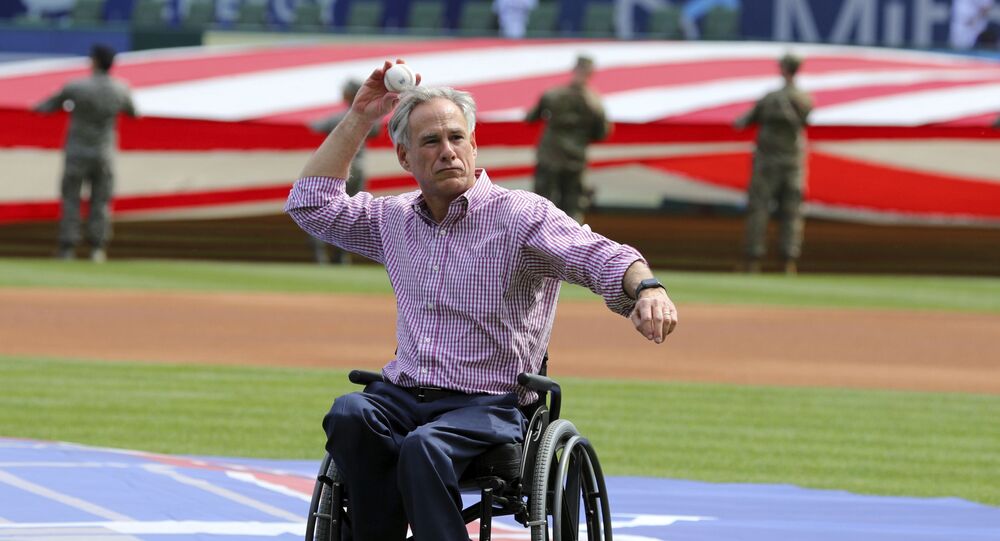 In the wake of former US President Donald Trump’s failed bid to overturn the results of the 2020 US presidential election, several states controlled by his Republican Party have moved to block measures making it easier for citizens to vote, claiming they encourage voter fraud.

In response to a decision by Major League Baseball (MLB) not to host its annual All-Star Game in Atlanta, Georgia, after that state passed a restrictive voting law, Texas Governor Greg Abbott has said he will no longer throw out the first pitch inaugurating the Texas Rangers’ 2021 season. A similar bill to Georgia’s is working its way through the Texas legislature, with Abbott’s support.

“I was looking forward to throwing out the first pitch at the Texas Rangers' home opening game until MLB adopted what has turned out to be a false narrative about Georgia's election law reforms,” Abbott wrote on Twitter Monday morning. “It is shameful that America's pastime is being influenced by partisan politics.”

I was looking forward to throwing out the first pitch at the Texas Rangers' home opening game until @MLB adopted what has turned out to be a false narrative about Georgia's election law reforms.

It is shameful that America's pastime is being influenced by partisan politics. pic.twitter.com/pNJApYBHpw

​The Rangers will play their first home game of the 2021 season on Monday afternoon against the Toronto Blue Jays at Globe Life Field in Arlington, Texas, between Dallas and Fort Worth. The opening ceremony was to have included Abbott alongside frontline “heroes” of the COVID-19 pandemic, including a teacher who has lost family members to the virus. According to The Dallas Morning News, the teacher will now throw out the pitch to a health care worker.

On Friday, MLB announced it was moving the Midsummer Classic all-star game from Atlanta to another city outside of Georgia as a protest against a restrictive new voting bill signed into law by Governor Brian Kemp. The law rolls back or limits many of the ways voters cast ballots in the 2020 elections and is seen by some as both an attack against the state’s large black population, as well as a response to former US President Donald Trump, who urged Georgia Secretary of State Brad Raffensperger to “find” enough votes for him to win a ballot recount.

“All I want to do is this: I just want to find 11,780 votes, which is one more than we have,” Trump said in a December phone call to Raffensperger, according to an audio recording obtained by The Washington Post. “There’s nothing wrong with saying, you know, that you’ve recalculated.”

The Georgia law also comes in the wake of massive voter purges that have removed hundreds of thousands of names from Georgia voting lists in recent years thanks to a “use it or lose it” law that Kemp similarly cast as preventing voter fraud, but which critics denounced as disproportionately affecting Black voters.

In response to MLB’s move and rising criticisms of the law by other US corporations, Trump urged his supporters to “boycott baseball and all of the woke companies that are interfering with free and fair elections.” Trump has maintained that he won the November 2020 election against Biden, which was only called against him due to wide-ranging fraud by the Democrats. At its height, hundreds of people, including some of Trump's supporters stormed the US Capitol and temporarily dispersed Congress in a riotous, but ultimately doomed attempt to “stop the steal.”

Last week, the Texas Senate passed its own version of the Georgia law protested by the MLB and another similar law passed last month in Iowa. The bill has Abbott’s support, and he has pitched it as ensuring election security.

The state’s Latino and black populations voted very strongly for US President Joe Biden, who didn’t win Texas’ electoral votes, but somewhat closed the gap on Trump’s 9% victory margin in the 2016 US presidential election, when he faced off against Democratic candidate Hillary Clinton. An “election autopsy” by the Texas Democratic Party obtained by ABC News predicted that "with sufficient investment and ambition, Texas can be a reliably Democratic state in the next decade” due to its steadily changing demographics.

While MLB hasn’t commented on the Texas bill, Fort Worth-based American Airlines has.

“To make American’s stance clear: We are strongly opposed to this bill and others like it. As a Texas-based business, we must stand up for the rights of our team members and customers who call Texas home, and honor the sacrifices made by generations of Americans to protect and expand the right to vote,” the airline, which is the world’s largest by fleet size, said in an April 1 statement.

“Voting is the hallmark of our democracy, and is the foundation of our great country. We value the democratic process and believe every eligible American should be allowed to exercise their right to vote, no matter which political party or candidate they support.”