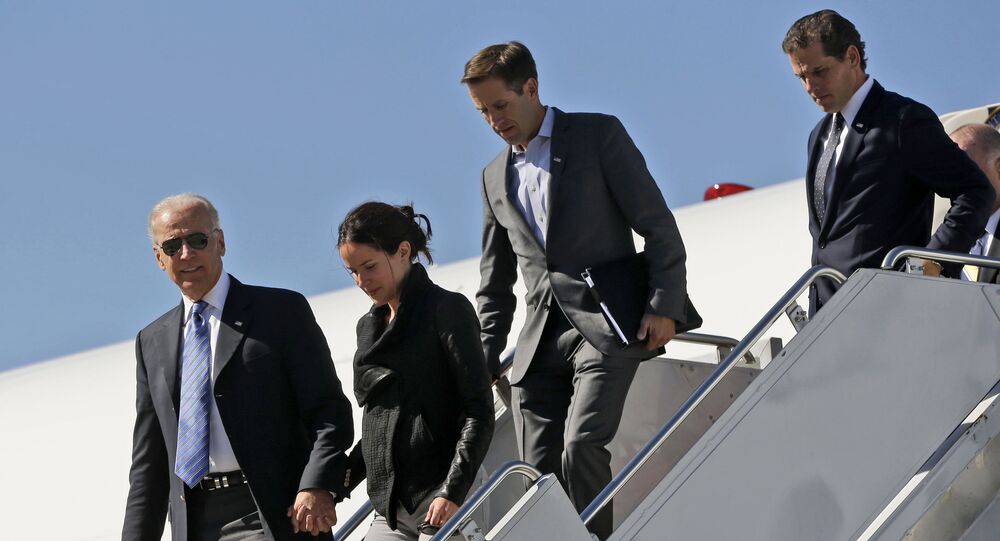 In 2016, the US president's son Hunter Biden began dating Hallie Biden, wife of his late brother Beau, who had died from cancer a year before. In his upcoming book "Beautiful Things", Hunter details how this relationship helped both of them overcome Beau's loss – despite causing some hard feelings among the public and apparently their own family.

President Joe Biden was "reluctant" at first to publicly support Hunter's relationship with his other son's widow, Hallie Biden, Fox News claims, citing excerpts from an advance copy of "Beautiful Things" that is expected to be released on 6 April.

Hunter moved to convince his father to show approval of the affair otherwise it would "seem wrong" without this gesture, because the media had already started to pressure the businessman about whether something was going on between Hallie and her brother-in-law.

"'Dad,' I told him, 'if people find out, but they think you're not approving of this, it makes it seem wrong", Hunter wrote in the memoir.

The then-Burisma board member also used the "kids" argument to convince his dad to cast public support for the relationship, apparently suggesting that Hallie and Beau's two children would suffer emotionally if they didn't see their grandad's approval for her mum's love with their uncle.

"'The kids have to know there's nothing wrong with this, and the one person who can tell them that is you'", Hunter reportedly told the future US president.

In early 2017, Joe Biden, who had already left office at the time, issued a public statement in support of his son's relationship:

"We are all lucky that Hunter and Hallie found each other as they were putting their lives together again after such sadness. They have mine and Jill's full and complete support and we are happy for them" the elder Biden said.

But their love, which Hunter said was inspired by "the idea that we could keep Beau alive by being together", did not last long. The pair broke up in 2019, while living "lives of quiet desperation" and suffering from increased public attention, Hunter explains.

"If we weren't all in, we worried, the relationship would be perceived as a salacious fling. So we tried to make something work that, in hindsight, was never in the cards", Hunter is quoted as saying in the book.

Biden's son continued suffering from a substance abuse and "backslided" after a rehab stine. Hunter admits that he "might have dealt with all this more effectively" – including his "evaporated" business ventures – if he had been "clean and sober".

Hunter, who has been in the spotlight over the last two years for his highly-paid positions within Chinese and Ukrainian companies that he landed while his father was still vice president, admitted that he was "a mess" at certain points of his life over drug and alcohol abuse. For example, Hunter said in the book that he didn't have any "recollection" of a sexual encounter with a stripper who became pregnant with his child in 2018:

"That's how little connection I had with anyone. I was a mess, but a mess I've taken responsibility for", Biden writes.