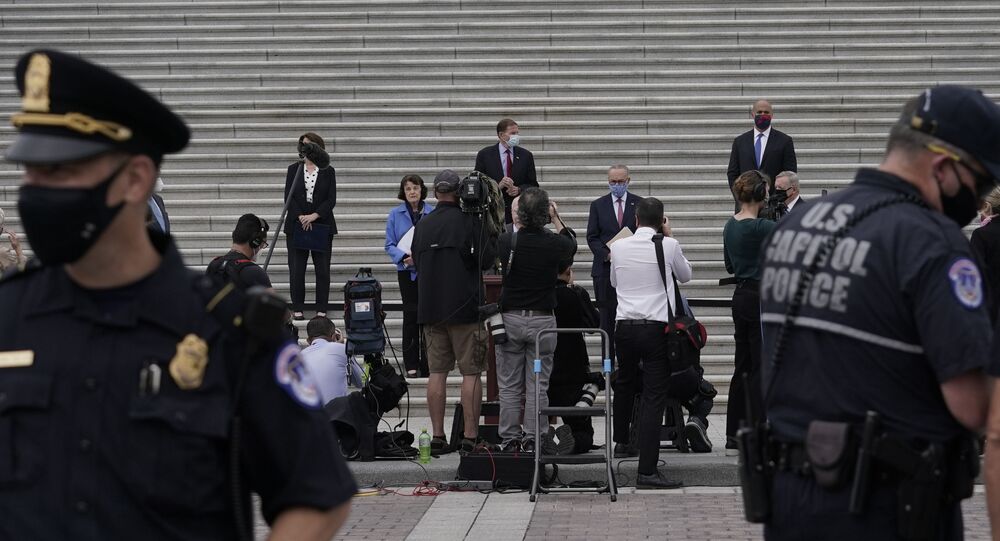 On Friday, 25-year-old Noah Green rammed his car into two Capitol Police officers at an entry point outside the Capitol building, subsequently killing one police officer and injuring another. Eventually, the perpetrator was shot and killed.

The head of the Capitol Police union has pushed Congress to step up security in the wake of the second deadly Capitol attack this year, warning that many officers are looking to retire soon, CNN reported.

According to Gus Papathanasiou, chairman of the US Capitol Police Labor Committee, the department is 233 officers short of its approved level of more than 2,000 officers.

"We are struggling to meet existing mission requirements even with the officers working massive amounts of forced overtime," he said. "In the next 3-5 years we have another 500 officers who will be eligible to retire. Many of these officers could put in their retirement papers tomorrow. I've had many younger officers confide in me that they're actively looking at other agencies and departments right now."

According to the report, Papathanasiou said that after losing several officers this year, the department is in disarray. Officer William "Billy" Evans, an 18-year veteran of the police and a member of the "First Responders Unit," died after Friday's assault, while the officer who was wounded on Friday, Kenny Shaver, has reportedly been released from the hospital.

The union chair added that Evans was "well respected within the department and his loss will not be forgotten."

Another officer who passed away this year was Brian Sicknick, who died as a result of injuries sustained during the riot on January 6. And a second Capitol Police officer committed suicide a few weeks later.

"We have now lost two officers in the line of duty this year," Papathanasiou said. "Another officer has taken his own life and we have 80 officers who were seriously injured in the insurrection. Some of those injured officers may never return to duty."

© REUTERS / CARLOS BARRIA
Law enforcement officers guard streets surrounding the U.S. Capitol and congressional office buildings after a blue car ramming a police barricade outside the U.S. Capitol building in an incident that reportedly resulted in the death of one Capitol police officer, the injury of another officer and the death of the driver as a result of police gunfire on Capitol Hill in Washington, U.S. April 2, 2021.

Papathanasiou urged Congress to put into motion the recommendations made by a task force investigating the Jan. 6 riot, which was headed by retired Army Lt. Gen. Russel Honoré, although he emphasized that their "first priority has to be retaining our existing officers."

On ABC's "This Week" on Sunday, Honoré said Congress has to "move forward now" to pass supplementary funding for law enforcement agencies.

"We gave them the plan. We worked hard to give it to them. Now they've got to work to make that plan come through, and that's called a supplemental, because the police in the Capitol deserve this," he said. "Our nation deserves it. And those families who have lost loved ones deserve it. And we need to up our game in support of the Capitol Police."

Indiana-native Green crashed his car into a security barrier at the Capitol complex. According to the police, he was shot after getting out of the car with a knife and "lunging" at officers. Green was pronounced dead at a hospital.

© REUTERS / JONATHAN ERNST
US Army Memo Reveals Leadership Opposed Deploying National Guard Ahead of Capitol Riot - Report
On January 6, supporters of former President Donald Trump broke into the Capitol to stop lawmakers from accepting college votes that would certify the Democrat candidate, Joe Biden, winning in the 2020 presidential race. During the incident, Congress's work to verify Biden's victory was halted for several hours.

At least 200 individuals have been charged for participating in the Capitol riot on January 6, according to the media. Of those arrested, more than 65 were arrested for assaulting law enforcement officers.

Last month the Department of Defense approved a request to extend the presence of National Guard troops at the Capitol grounds, who were dispatched for Biden's inauguration following the Capitol mayhem in January for two months, with nearly 2,300 National Guard troops continuing their deployment in the nation's capital, which is a 50% reduction of the previous presence. The request was made by the US Capitol Police, citing potential threats of US militia groups attacking lawmakers at the Capitol.