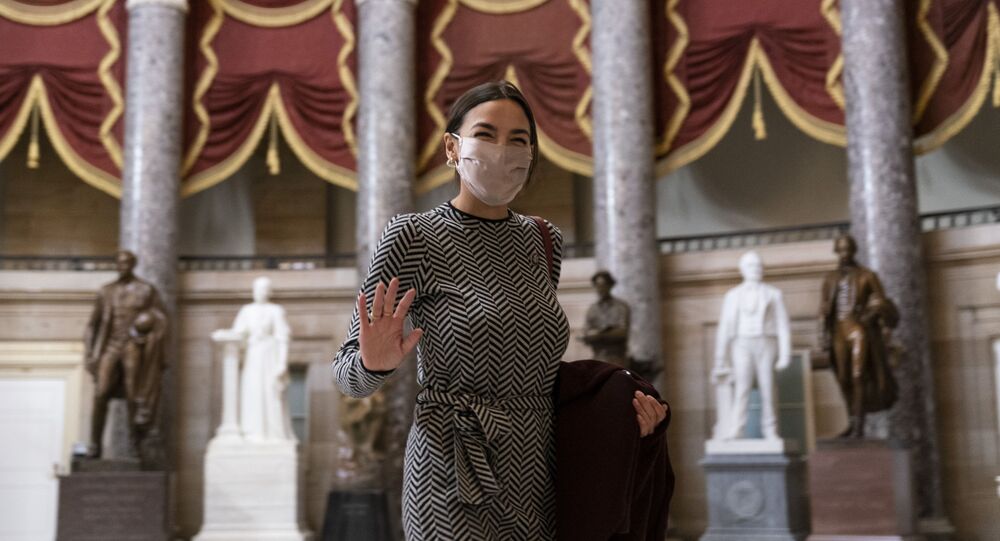 Ocasio-Cortez, a member of the Democratic Party's progressive lawmakers group dubbed "The Squad", is one of the most talked about members of the House, whose statements on pressing issues of the American agenda are loudly echoed in the mainstream media. However, her views are often met with polarized responses on social media.

Rep. Alexandria Ocasio-Cortez was listed among the least successful members of the previous 116th Congress in terms of bills passed into the upper house, or into law, a study from the nonpartisan Center for Effective Lawmaking showed.

According to the research, a joint initiative of Vanderbilt University and the University of Virginia, AOC submitted 21 "substantive" bills to Congress, but none of them went any further.

Data gathered from Congress.gov by the researchers shows that none of the bills saw committee action, floor votes, or became law, and Ocasio-Cortez was ranked 230th out of 240 Democrats nationwide, and dead last among the 19 Democrats from New York.

“She introduced a lot of bills, but she was not successful at having them receive any sort of action in committee or beyond committee and if they can’t get through committee they cannot pass the House,” Alan Wiseman, a Vanderbilt political scientist and co-director of the center, said while explaining the ranking in the New York Post's report.

AOC's federal overhaul of public housing, a moratorium on fracking, and a mandate to provide undocumented immigrants with full federal public benefits are cited among the legislation that failed.

“It’s clear that she was trying to get her legislative agenda moving and engage with the lawmaking process,” Wiseman added. “But she wasn’t as successful as some other members were — even among [other] freshmen — at getting people to pay attention to her legislation.”

Citing undisclosed "insiders" familiar with the workings of Democratic House representatives, the report suggests many of AOC's colleagues find her approach to be alienating. Some of them claimed that AOC's attention was never on legislation, but rather "media and narrative."

"Tweeting is easy, governing is hard. You need to have friends. You need to understand the committee process, you need to be willing to make sacrifices," an insider is quoted in the report as saying. "Her first day in Congress … she decided to protest outside of Nancy Pelosi's office."

© REUTERS / CBP
'Where Are You?': GOP Senator Graham Blasts AOC for Not Visiting Southern Border Amid Migrant Influx
According to the study, other members of AOC's Democratic "Squad", which some consider to be socialist-leaning, did better. Representative Ilhan Omar was ranked 214th after sponsoring 33 bills that never made it out of committee, while Rep. Rashida Tlaib had three substantive bills advance to a committee, one of which became law, which earned her 92nd place in the ranking.
© AP Photo / J. Scott Applewhite
Rep. Rashida Tlaib, D-Mich., Rep. Ilhan Omar, D-Minn., Rep. Alexandria Ocasio-Cortez, D-N.Y., and Rep. Ayanna Pressley, D-Mass., respond to remarks by President Donald Trump after his call for the four Democratic congresswomen to go back to their "broken" countries

The most effective House Democrat, according to the research, was New York's Nita Lowey, who introduced 30 bills in the 116th Congress, 14 of which passed the House and seven of which became law. Lowey chaired the Appropriations Committee, and resigned after the 116th Congress, serving 32 years in Congress.

Michael McCaul of Texas was the most successful House Republican, proposing 24 bills, ten of which passed the House and two of which became law.

According to the analysis, the most successful senators for their respective parties were Michigan Democrat Gary Peters and Florida Republican Marco Rubio. For instance, Rubio, who chaired the Senate Small Business Committee, introduced 107 bills, ten of which were approved by the Senate and six of which were signed into law.

“While political talking points and ideology-fueled headlines may gather more attention, bill advancement is the key to effectiveness for every elected lawmaker in Congress,” Craig Volden, professor of public policy and politics at the University of Virginia’s Frank Batten School of Leadership and Public Policy, explained the purpose of the study. “The Center for Effective Lawmaking is committed to undertaking legislative effectiveness research as a valuable tool, allowing American citizens to understand which officials are overcoming gridlock through bill sponsorship and advancement.”

According to the authors of the research, "bipartisanship appears to pay off for those who seek to advance their legislative initiatives." Senator Peters, the most effective senator in the 116th Congress, is credited for his ability to form coalitions.

"This alone is an accomplishment, as more than 93 percent of Democratic senators’ bills died in committee in this congress," Wiseman said of the senator's efforts.

'The Squad' to Meet 'The Force'?: GOP Congresswoman-Elect Salazar to Form Conservative Group