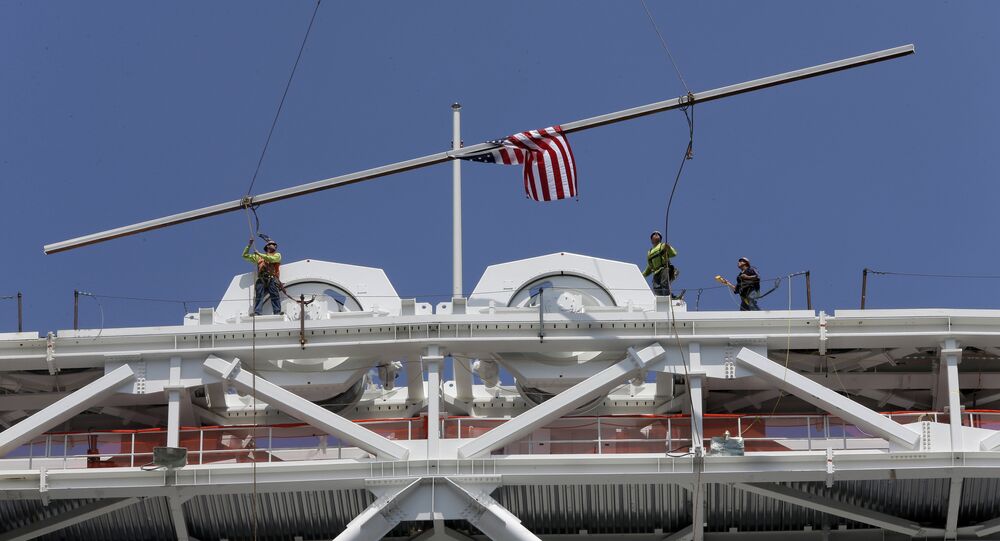 Republican House and Senate leaders expressed vocal opposition to the president’s infrastructure plan, dismissing it as a "'kitchen sink' of wasteful progressive demands” and criticising its call for new taxes. Biden unveiled the plan on Wednesday, calling it a “once-in-a-generation” chance to fix America’s “crumbling” infrastructure.

The Biden administration plans to move ahead with the president’s $2.3 trillion infrastructure bill even if it has to be pushed through Congress without GOP support, Energy Secretary Jennifer Granholm has announced.

“As [President Biden] has said, he was sent to the presidency to do a job for America. And if the vast majority of Americans, Democrats and Republicans, across the country support spending on our country and not allowing us to lose the race globally, then he’s going to do that,” Granholm said, speaking to CNN’s State of the Union on Sunday and responding when pressed whether the White House might pass the infrastructure bill using a process called reconciliation if Republicans don’t support the legislation.

The parliamentary process of reconciliation allows for bills to be passed using simple majorities, instead of the traditional 60 vote majority rule used in the Senate. The current Senate includes 48 Democrats and two Democratic-leaning independents, with Vice President Kamala Harris able to cast the deciding tie-breaking vote in the event of a tie. In the House, Democrats enjoy a thin 219-211 majority.

In her Sunday interview, Granholm went on to say that Biden’s “sincere preference” would be to have Republicans “come to the table” and negotiate.

Asked to comment on the bill’s spending on things not traditionally associated with infrastructure, including over $600 billion in funding for care home facilities and affordable housing, and hundreds of billions of dollars for electric vehicles, Granholm said the bill’s focus is not just roads and bridges, but “creating good-paying sustainable jobs in a whole array of sectors that will help us to win the future.”

© REUTERS / ERIN SCOTT
Joe Biden Blasts Critics of $2Trln Infrastructure Plan as Republicans Lament Lack of Dialogue
Granholm called the bill “the biggest investment in America since FDR – since the New Deal” and said it would help restore America’s industrial base. “It is an amazing statement that finally we’re going to invest in America instead of watching all these other countries beat us to the punch,” she said.

Biden’s infrastructure proposal, formally known as the “American Jobs Plan,” includes four major components, including transportation infrastructure, spending on broadband and upgrading buildings, investments in the care economy, as well as funding for R&D into future technologies. The proposal will require a reform of the tax code, including a corporate tax hike from 21 percent to 28 percent (which would still be below the 35 percent rate it was at before the Trump-backed corporate tax cuts in 2017).

Republicans have vowed to resist the Biden infrastructure bill, with Senate Minority Leader Mitch McConnell saying bluntly that the proposal was “not going to get support from our side.” House Minority Leader Kevin McCarthy characterised the plans as a “’kitchen sink’ of wasteful progressive demands.”

Senator Mitt Romney, meanwhile, called on Biden to “live up to the partisanship he preached in his inaugural address,” and suggested that “a Senate evenly split between both parties and a bare Democratic House majority are hardly a mandate to ‘go it alone.’”

© Sputnik / Depositphotos / Andrew Lozovyi / Overhead view of radio host holding smartphone with blank screen while sitting at desk near microphone and laptop
Biden's Infrastructure Plan Revealed to America
GOP lawmakers stepped up their offensive over the weekend, with Senator Roy Blunt telling Fox News Sunday that “if we’d go back and look at roads and bridges and ports and airports, and maybe even underground water systems and broadband, you’d still be talking about less than 30 percent of this entire package.” Blunt suggested the Republicans would be more amicable to spending in the neighbourhood of $615 billion.

Trump spent much of the 2016 campaign complaining about the poor state of US infrastructure, comparing the nation’s airports to a “Third World country” and saying new spending was needed for “roads, new tunnels, new bridges, new airports, new schools,” even though the US was “a mess” of a country that owed $20 trillion.

In mid-2020, Trump pitched a $1 trillion infrastructure package to make good on his promises to invest in infrastructure, but the proposal withered on the vine after he lost the November election.