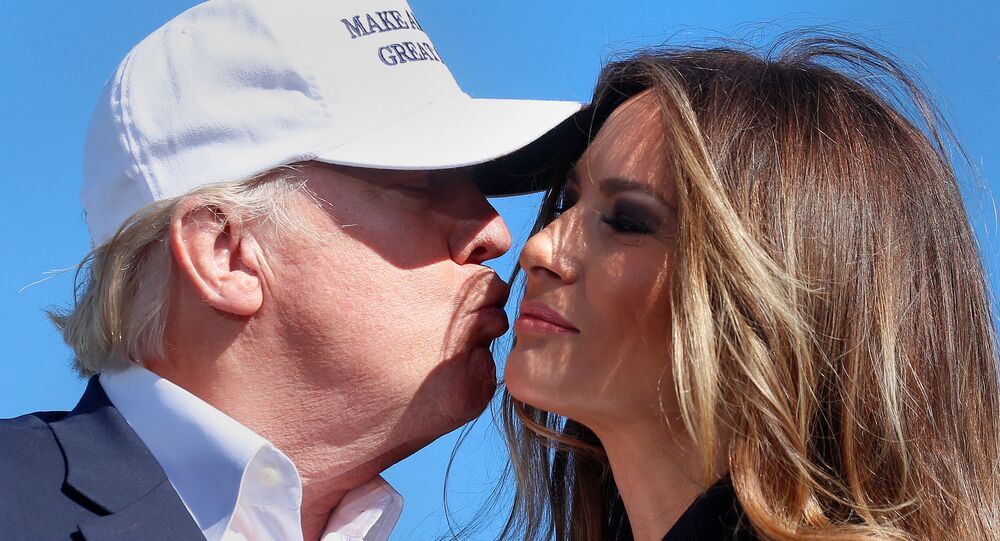 Pullitzer Prize-winning author Mary Jordan reportedly based her book, The Art of Her Deal: The Untold Story of Melania Trump, published in June 2020, on interviews with more than one hundred people in five countries, offering to give an unprecedented portrait of the ex-first lady.

Melania Trump and her husband, ex-president Donald Trump opt to stay in separate bedrooms whenever they travel, the Daily Star cites the author of a recent book about the former first couple as claiming.

"Trump typically wakes around 5 am, well before Melania, and turns on his television," writes Washington Post reporter Mary Jordan in her volume, The Art of Her Deal: The Untold Story of Melania Trump.

According to Jordan, the power couple are not in the habit of inviting their grandchildren to their bed for an early-morning cuddle with them.

"The Trump family works together and sometimes vacations together, but they are used to having their own space and a lot of it,” adds the author.

The daughter of the 45th President and his first wife, Ivana, Ivanka Trump and her husband, Jared, have their own separate mansion at Bedminster, Trump's private golf club, which spans over five hundred acres in New Jersey. The couple, who used to serve as White House advisers to Trump during his tenure, have three children.

Furthermore, while staying away from home, Trump is suggested as typically requesting a room with a particular type of décor to cater to his taste.

"No matter which of his properties he is visiting, Trump sleeps in a separate bedroom that has been decorated to his taste – he favours darker coloured walls and rugs, while Melania likes whites and light colours,” continues the book, published by Simon & Schuster in June 2020.

Tomorrow, @marycjordan shares the untold story of Melania Trump in THE ART OF HER DEAL with @sallyquinndc. Register here --> https://t.co/zEhRUK8vN4 pic.twitter.com/mzZN6ekWlo

​Mary Jordan earlier claimed that while working on her volume she interviewed more than a hundred people, including Melania Trump's Slovenian childhood acquaintances, staff members at diverse Trump properties, and representatives of the New York and Paris modelling world.

She also conversed briefly with the former first lady in the course of her reporting on the 2016 election.

In the biography that was touted as offering an unprecedented portrait of the ex-FLOTUS, the author claimed that those "who dismiss her as nothing more than an accessory do not understand her or her influence".

According to Jordan, for some key decisions, Melania was Donald Trump’s single most influential adviser.

Since they departed the White House after Democrat Joe Biden took over the presidency on 20 January, the Trumps have moved back to their Mar-a-Lago resort in southern Florida.

Melania Trump has been ‘flying under the radar’ somewhat, although she reportedly intends to carry on working on her flagship social campaign "Be Best", aimed at fighting online bullying.

Amid large-scale rumours that the ex-power couple was weighing a divorce once they are out of Pennsylvania Avenue, Donald Trump referred to his wife as "the future first lady" at the Conservative Political Action Conference (CPAC) in Orlando, Florida, where he made a lengthy speech addressing fellow Republicans and supporters in early March.

"Do you miss me yet?", Trump had asked the roaring crowd, as he also teased a political comeback.

The former first lady was forced to weigh in on the rumours regarding her relationship with her husband recently, after a CNN report claimed Melania Trump has been "bitter and chilly" towards her spouse since they exited the White House.

A former White House official was cited by the outlet as saying the ex-FLOTUS had been paying daily visits to Trump Mar-a-Lago resort spa in West Palm Beach, Florida, since the Trumps’ exodus from the presidential residence.

© AP Photo / Terry Renna
A moving truck is parked outside Mar-a-Lago in Palm Beach, Fla., on Monday, Jan. 18, 2021. President Donald Trump is expected to return to his residence on Wednesday, Jan. 20.

In response to the report, the Office of Melania Trump issued a statement via Twitter stressing that the former first lady was “a private citizen" and no longer in office.