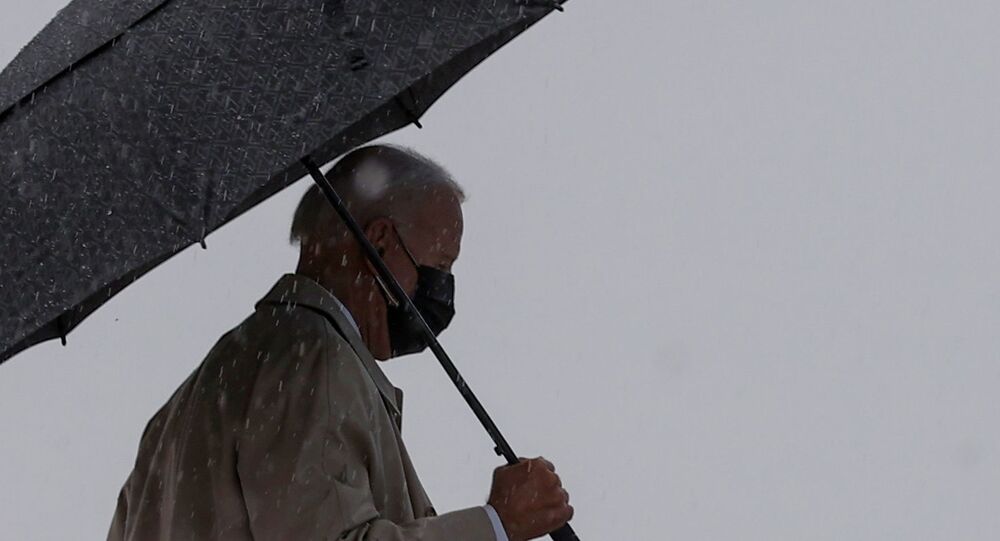 US President Joe Biden previously stole headlines after falling three times while walking up the airstairs to Air Force One ahead of an earlier scheduled trip to Atlanta, Georgia. The stumble was later written off as a simple mishap that did not even require medical attention.

Biden was declared “just fine” by White House staff on Wednesday after video footage showed the commander-in-chief having a minor entanglement with the Air Force One airstairs ahead of his highly anticipated trip to Pittsburgh, Pennsylvania.

Video recordings of the incident show Biden sporting a tan trench coat, with an umbrella in one hand and his briefcase in the other, all while carefully walking up the rain-soaked stairs. It’s safe to say the amount of rain pouring down was much more than a slight drizzle.

However, as Biden managed to make his way toward the plane’s door, the president is seen nearly missing a step but managing to quickly recompose himself. Despite the trip-up, Biden did successfully make it to the entryway.

Nearly two weeks before the Wednesday incident, Biden triggered a chorus of gasps and sent eyebrows into a startled expression after tripping not one or twice, but three times while boarding the presidential plane.

Moments after the incident grabbed the attention of many eagle-eyed reporters and spectators, Kate Bedingfield, who serves as the White House communications director, cleared the air and noted that Biden was a-okay.

“I know folks have seen that President Biden slipped on his way up the stairs to AF1,” she acknowledged at the time, adding, “I’m happy to report that he is just fine, and did not even require any attention from the medical team who travels with him.”

Screenshot/Caleb Hull
Screenshot captures the moment that US President Joe Biden caught himself after stumbling three times while ascending the airstairs to board Air Force Once.

At the time, the Biden-airstair encounter was largely blamed on the day’s strong winds as White House Deputy Press Secretary Karine Jean-Pierre also told pool reporters that she had nearly taken a tumble herself while ascending the stairway.

Although Biden was declared “fine” after the initial stumble, the misstep quickly drew concerns over the president’s well-being and raised questions on whether or not he is fit to serve in the White House. A Rasmussen poll previously indicated that half of individuals polled believed that Biden was not “physically and mentally up to the job.”