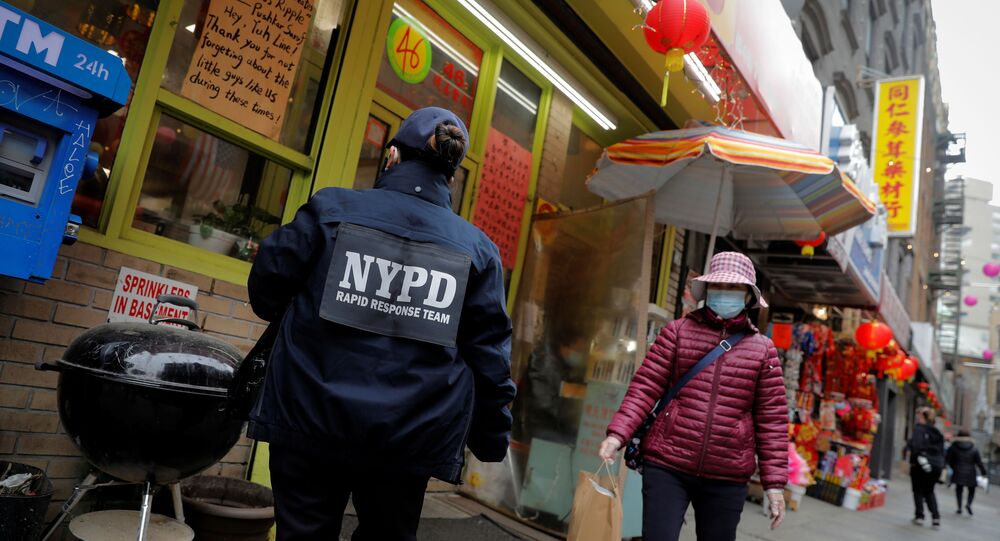 The New York Police Department is searching for a man who assaulted a 65-year-old woman on Monday while making "anti-Asian statements", the agency's hate crimes department said on Twitter.

Help identify the below individual wanted in connection to an assault. On Monday, March 29th at 11:40 AM, at 360 West 43rd St, a female, 65, was approached by an unidentified male who punched and kicked her about the body and made anti-Asian statements. Info?☎️1-800-577-TIPS. pic.twitter.com/LkwfYhMCLr

According to police, the unidentified male approached the Asian lady shortly before noon in Midtown Manhattan, kicked her to the ground and repeatedly stomped on the woman's head. It is said the lady, who is now being treated a local hospital, was on her way to church when attacked.

The incident was caught on nearby security cameras, causing outrage among journalists and observers, who pointed out that a witness and security guards in a nearby building did nothing to stop the assailant. Moreover, one of the building's staffers had simply closed the door on the victim as she was laying on the ground following the assailant casually walking away from his victim.

NYPD says 65-year-old Asian American woman was walking to church this morning when suspect assaulted her and said "f*** you, you don't belong here." Happened in front of 360 W. 43rd St. 11:40am. Sources say building security guard not only failed to render her aid... 1/2 pic.twitter.com/ZLtQEHHJci

He closed door on helpless victim. She was punched and kicked causing her to fall. He then kicked her multiple times in the head before fleeing. Victim is currently hospitalized with swelling to the face, pain in left leg. @NYPDHateCrimes investigating. Here’s the suspect. 2/2 pic.twitter.com/2fJ5bEGwXU

The Brodsky Organisation, the building's management company, said on Instagram that "the staff who witnessed the attack have been suspended pending an investigation in conjunction with their union".

"The Brodsky Organisation is also working to identify a third-party delivery vendor present during the incident so that appropriate action can be taken".

NYPD's Hate Crimes Unit, which is now investigating the matter, has since shared camera footage that caught the attacker's face, asking people for more information to help identify the perpetrator.

This is absolutely vile. These attacks against Asian-American New Yorkers must end. Hate has no place here and we must always call it out when we see it.

My office is reaching out to the precinct and will do anything we can to be of assistance. https://t.co/8cBOniIORC

Two weeks ago, a 75-year-old Asian lady was attacked in the San Francisco Bay area while casually walking on the street.

On 16 March, a mass shooting at three massage parlours in Atlanta, Georgia, led to eight deaths, including six Asian women. The police did not charge the shooter with hate crimes, concluding that he was motivated by a sexual addiction.

In 2020, the Hate Crimes Task Force recorded 28 attacks against Asian Americans in comparison to just two in 2019.

Since the pandemic began, hate crimes against this ethic minority have risen by 149% in 16 major American cities, a study by the Centre for the Study of Hate and Extremism concluded.