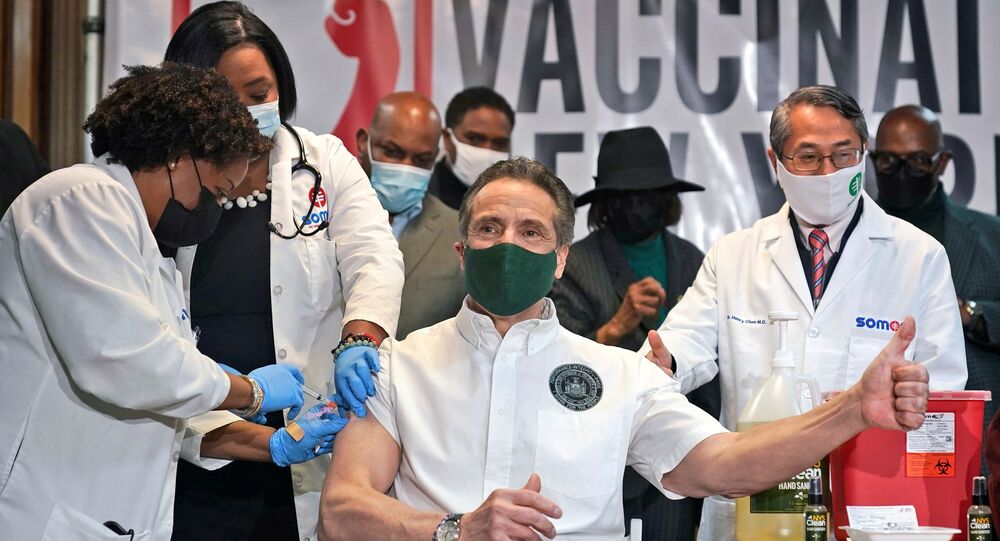 Last week, reports emerged saying that Cuomo ordered Health Department officials to conduct COVID-19 testing for some of the governor's family members, including his mother, brother, and one of his sisters.

People connected to New York Governor Andrew Cuomo were given priority coronavirus testing during the pandemic, The Washington Post reported.

The newspaper spoke to seven people with firsthand knowledge of the efforts, who revealed the practices on condition of anonymity, afraid of retribution by Cuomo's office.

Five people, including three nurses, said that in early March 2020 officials at testing sites established a system that gave preference to people the staff described as "priorities", "specials", "inner circle", or "criticals", diverting resources to those close to the governor.

According to one of the sources, more than 100 individuals were placed on a separate electronic datasheet at one of the first pandemic operation hubs in the state.

Two sources who worked at the New Rochelle site, an early operations hub, said the priority testing system evolved from passing along sticky notes with testing information coded to cover the priority patient's identity to Howard Zucker at the beginning of pandemic efforts into a separate electronic datasheet that included at least 100 people.

An individual with knowledge of the process and some of the names of the people on the list, told The Washington Post that among them were people "who had the resources and educational wherewithal" to go to private doctors and that there was "…no reason why state testing teams should have been diverted to these people".

Such practices made nurses uncomfortable, with one of them describing to the paper how some individuals were "pushed to the front of the line for no reason".

"It was like, 'Oh, your test matters'. And we know why. It's because of who you are, not because of anything medical", they said.

The nurse also described being dispatched from the New Rochelle centre to conduct tests in private residences and hotel rooms, saying there were instructions that those individuals were close to Cuomo.

Another nurse described the preferential treatment for Cuomo's family:

"They were treated like royalty", the nurse said. "I didn't understand why they were able to jump the line".

Andrew Cuomo's spokesman, Rich Azzopardi, told the paper that there was no "VIP" programme as described above, saying:
"when priority was given, it was to nurses, guardsmen, state workers, and other government officials central to the pandemic response and those they were in direct contact with, as well as individuals believed to have been exposed to COVID who had the capability to spread it further and impact vital operations".

The spokesman, however, responded to a specific question about the purportedly favourable treatment Cuomo's family received, noting simply: "To the extent this occurred, the governor was not aware".

From a public health perspective "where have you been", and "how many people might you have exposed" are the questions that guided who was given priority — not "who you know", New York Department of Health spokesman Gary Holmes told the outlet.

New York State Police spokesman Beau Duffy said he was "not sure" records were kept about special requests.

New York's Joint Commission on Public Ethics was urged by the office of state Attorney General Letitia James on Thursday to open an investigation into the testing protocol, after initial reports on the matter surfaced.

James' spokesman said in a statement that the reports about preferential treatment were "troubling", but noted that the AG's office lacks the jurisdiction to investigate.

Cuomo is also currently facing an investigation into possible sexual harassment in the workplace, overseen by the New York AG's office, with dozens of officials and aides in his administration already having been subpoenaed.

The governor is also facing bipartisan calls from New York lawmakers to resign amid the harassment allegations.

Besides the harassment claims, Cuomo faces a review into the alleged misreporting of a large number of COVID-19 deaths in nursing homes across the state last year.