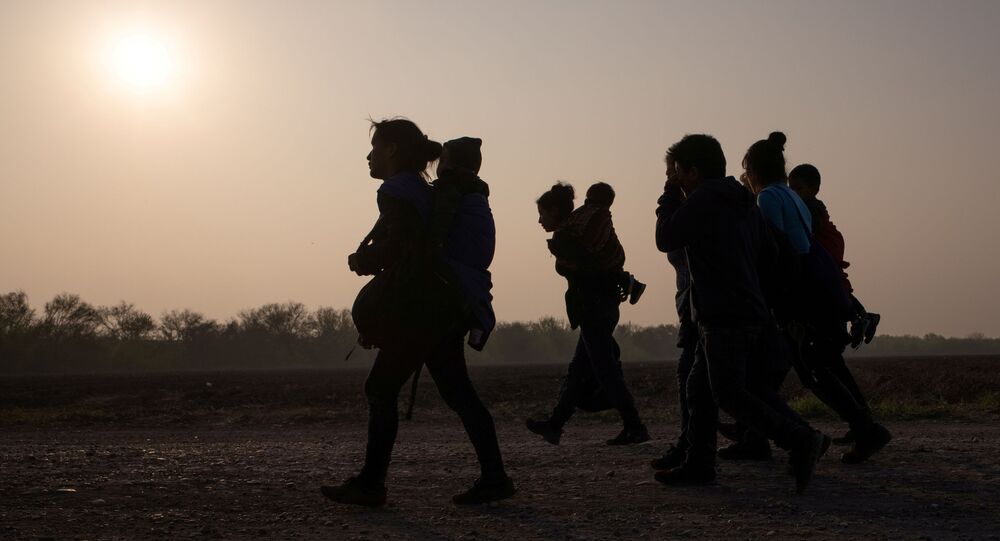 As the Joe Biden administration continues to deny there is a “crisis” at the US-Mexico border, a group of GOP senators went on a fact-finding trip to Texas, with Sen. Ted Cruz releasing footage of a staffer trying to block him from filming inside the crowded migrant detention facility where children were sleeping on floors.

As the US Border Patrol apprehended nearly 100,000 migrants at the US-Mexico border in February, amid a return to levels last seen in mid-2010, the Republican politician from South Carolina appeared on Fox News’ Hannity to slam the situation.

The senator said on Monday night he had “never seen so many incentives for illegal immigration as I see today.”

© REUTERS / Jerry Glaser/CBP
Migrants sit inside a temporary processing facility for migrants, including unaccompanied minors, in Donna, Texas, U.S. February 25, 2021 in this handout photo provided by the U.S. Customs and Border Protection agency

Elaborating on the fact-finding visit to the southern border he had made last week with a group of Republican senators, including Sen. Ted Cruz, R-Texas, and Sen. Mike Braun, R-Ind., he told the host, Sean Hannity, that he would not be surprised if soon there were 150,000 people a month attempting illegal crossings.

Graham said he could “understand why the Biden administration don't want the American people to know what's going on”.

“I saw massive system failure,” said the politician, as he revealed that Border Patrol agents had warned him before Democrat Joe Biden was inaugurated that he intended to undo his predecessor Trump’s immigration polices and get rid of "Remain in Mexico".

The latter policy, in line with then-president Donald Trump’s "zero-tolerance” immigration laws, required migrants from Central American countries to wait for asylum hearings outside the US.

“What did I see? I saw 200 plus women and small children being processed in front of me. That were going to be released into the United States within eight hours,” Graham said, describing what the GOP senators had witnessed at the Donna, Texas, border facility.

The politician “saw children with numbers on their wrist”, adding:

“We'll have half of Central America in the United States in a year if we don't change these policies, and the conditions in which these kids live in were terrible… Send them back or they are going to keep coming!”

The Republican senator spoke on the show after Jeffrey Self, a veteran Customs and Border Patrol (CBP) agent in Arizona and Texas, voiced his dismay over the Biden administration’s perceived lack of “operational planning to stem the flow”.

According to Self, the White House was focused instead on the “the threat of the aesthetics of this humanitarian crisis getting out more than it has”.

Self, who formerly headed the Southwest Border Operations, suggested that Democrats whose constituencies run along the border have fallen dismally short of standing up for their voters, while also leading the migrants astray.

According to Self, officers revealed to him in private conversations that the crisis now was “much more inhumane” than the “kids in cages” situation in 2014 under then-president Barack Obama.

“We have to quit playing politics and recognise people are suffering,” reiterated Self.

They subsequently shared their reports, with Cruz tweeting videos and photos from the Donna, Texas, holding centre, which is at 700 percent capacity amid a surge in migrants.

© REUTERS / GO NAKAMURA
South Carolina Senator Lindsey Graham (L), holds up a chart which shows numbers of apprehensions in South West border during a press conference after a tour around a section of the U.S.-Mexico border on a Texas Highway Patrol vessel in Mission, Texas, U.S., March 26, 2021.

Cruz also released footage of a woman he alleged was a Biden administration staffer attempting to block him from filming inside the crowded migrant detention facility containing children sleeping on the floor.

Ted Cruz went on Twitter to wonder “how far” was the current president “going to stop the American people from seeing inside the Donna CBP facility?”

US Border services reported a surge in new attempts to cross the border almost immediately after the Joe Biden administration issued a flurry of directives in January, embarking on pledges to dismantle Donald Trump’s hardline immigration policies.

It makes no sense for the Biden Administration to stop construction of the border wall. pic.twitter.com/E4uVD2uuy4

​The administration also announced it supported creating a ‘path to citizenship’ for at least 11 million undocumented immigrants already living in the US.

Biden also began admitting migrant children into the country, while expelling most families and single adults.
Joe Biden’s administration has since refused to call the border situation a “crisis”, instead describing it as a “vital human challenge”.

The Democratic President has also been resisting calls to pay a visit to the border, telling journalists that he plans to do so “at some point”.

Currently, Border Patrol officials say they are having to deal with a surge of approximately 5,000 daily encounters with migrants.

In February 2021, US authorities reported more than 100,000 apprehensions on the southern border, while data for March is likely to witness a 50 percent increase over February, according to the Associated Press.