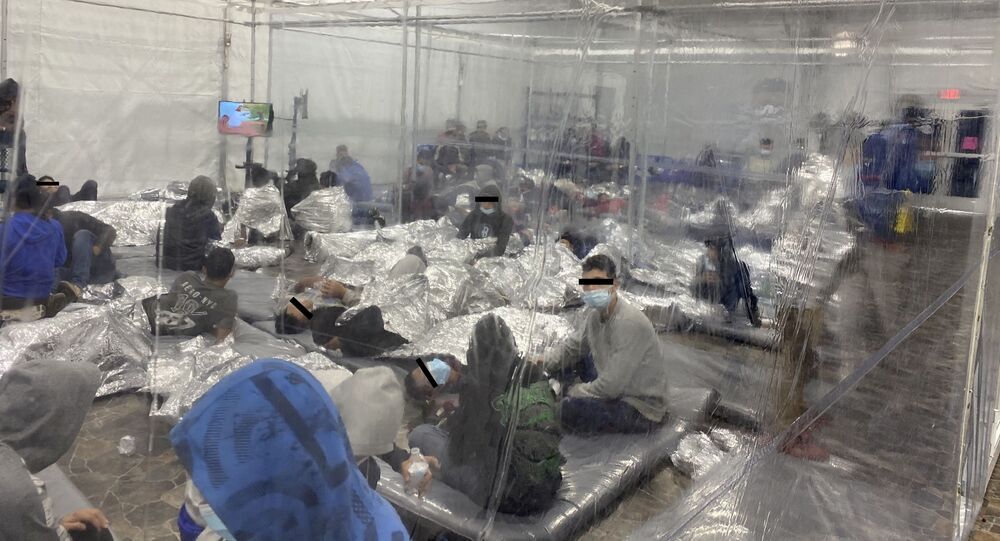 The Biden administration is facing what it has described as a “vital human challenge” at the US’s southern border with Mexico, with opponents estimating that illegal crossings have jumped 173 percent since 2020 and nearly 30 percent since January alone, and calling the situation a “crisis”.

Texas Congressman Ted Cruz has released footage of a woman he said was a Biden administration staffer attempting to block him from filming inside a densely packed migrant detention facility containing minors sleeping on floors.

A group of 19 GOP senators conducted a fact-finding trip to a migrant holding and processing facility in Donna, Texas on Thursday, speaking to officials and filming footage which they then released to the press and on social media.

In the video in question, Cruz could be heard from behind the camera arguing with a woman attempting to block his camera from filming and asking him to “please respect the people” and follow the rules.

“So you work for commissioner, you’re a senior advisor, you were hired two weeks ago, and you were instructed to ask us to not have any pictures here because the political leadership at the [Department of Homeland Security] does not want the American people to know it. You keep standing in front of the pictures, so you don’t want to take the pictures taken. The rules are arbitrary and they’re designed to keep the American people in the dark,” Cruz ranted, as the woman, who did not identify herself on camera, repeated over and over “please give dignity to the people,” and “please respect the rules.”

“Please respect the rules and give the people dignity and respect,” the woman said. “You’re asking – is this dignity and respect?” Cruz responded, pointing to blurred out footage of people packed together in a room behind a closed glass door. “There’s a pandemic. Is this respecting the rights of these kids?” the senator asked.

“This is not a zoo sir. Please don’t treat the people as such,” the woman implored. “You’re right, and this is a dangerous place and your policies unfortunately are trying to hide them,” Cruz shot back, adding “this is not respect,” as the camera again panned to show conditions inside the room.

In an interview for Fox News on Sunday, Cruz characterised the Donna detention facility as a “giant tent city,” and said that while it was designed to hold a thousand people, and 250 under Covid restrictions, it actually has nearly 4,000 people in it, including children in cages, and is at 1,500% capacity. “In that facility, children are testing positive for Covid at roughly a 10 percent rate,” Cruz said, noting that it was impossible for detainees to observe social distancing guidelines and stay 6 feet apart.

© REUTERS / JOSE LUIS GONZALEZ
Biden Representative Allegedly Asked GOP Senators to Scrub Photos Taken at Texas Migrant Centre
Earlier, Cruz and other senators posted pictures and video footage of the facility, and called the situation a “humanitarian and a public health crisis” with people piled up “literally wall to wall” on the floor in each holding pod.

A group of Democratic lawmakers paid their own visit to the border last week, where they acknowledged the difficult situation but claimed that Joe Biden had “inherited” the problem from the Trump administration. The White House has repeatedly made similar statements, and has also recently argued that the surge was the result of “cyclical” circumstances, not changes in federal immigration policy.

The US-Mexico border has experienced an explosion in attempted migrations by adults, families with children and unaccompanied minors, with border patrol agents registering over 100,000 attempted crossing in February, nearly three times the rate seen during same period in 2020. The Department of Homeland Security, which oversees both the Customs and Border Patrol and the Immigration and Customs Enforcement agencies, has reported having 18,000 unaccompanied minors in custody as of 25 March.

The Biden administration has refused to call the border situation a “crisis,” instead describing it as a “challenge” or “vital human challenge”.

Biden has faced flak on the border issue from former president Donald Trump, who warned that the current administration’s policies could “destroy” the country unless they were reversed. On Saturday, Trump said that he might visit the border soon, saying that “a lot of people want” him to do so. Biden responded by saying he doesn’t care what “the other guy does” and said he was “very confident” in his own plan to tackle the migration surge.

A recent ABC/Ipsos poll found that 54 percent of Americans believe that the situation at the border is a “crisis”, while 42 percent said it was a “serious problem” but not a crisis.

Border services reported a surge in new entry attempts almost immediately after the Biden administration began dismantling Trump’s hardline immigration policies. In a flurry of directives in January, Biden halted construction of his predecessor’s border wall in favour of a technology-based ‘smart’ wall, moved to end “harsh and extreme immigration enforcement”, promised to “restore and expand” the asylum system, fortified the Deferred Action for Childhood Arrivals (DACA) programme, and rescinded the Trump travel ban. The administration also announced its support for creating a ‘path to citizenship’ for at least 11 million undocumented immigrants already living in the US, which one observer speaking to the New York Times described as the “boldest immigration agenda any administration has put forward in generations”.

Critics of the Democrat’s agenda from both the left and the right have expressed fears that these immigration-friendly policies could lead to a decline in wages among working-class Americans, lead to increased crime and cause other social problems.